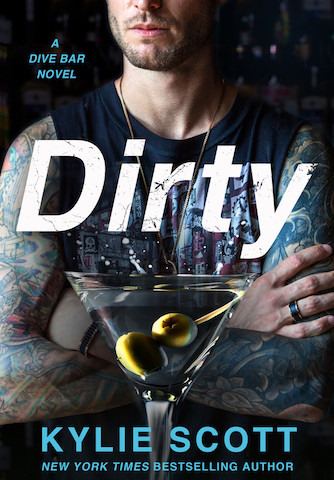 Witty repartee, larger than life characters, and lots of oral sex. Kylie Scott's new series puts me in mind of a sexed up Crusie. Witty repartee, charming characters, and lots of oral sex. Kylie Scott’s new series puts me in mind of a sexed up Crusie.

An advance reading proof of this book was generously provided by MacMillan Australia.

If you want to know whether or not Kylie Scott’s new book passes muster, you can breathe easy. Dirty, the first book in the Dive Bar series, features snappy one-liners, saucy dialogue, and characters with personalities that just leap off the page. But if you’re looking for a copy of the Stage Dive series, you’re in for a surprise.

When Lydia Green discovers that her groom is having an affair with the best man, she skips the wedding and breaks into a stranger’s house to hide in his bathtub. Just for a bit. Needless to say, when Vaughn Hewson discovers her, he’s very surprised. Lydia is also surprised, but in a different way:

Even with no clothing to take cues from, the dude was clearly the epitome of cool. He looked about my age, or maybe a little older. He had longish red-blond hair, dark blue eyes set in ann angular face, a lean but muscular torso covered in tattoos, and a rather large cock. Not that I meant to check him out, it’s just kind of hard to ignore a penis and scrotum when they’re dangling right in front of your face. I tilted my head, trying to get some perspective. Every viewpoint, however, was equally shocking. There was dick as far as the eye could see.

In short, the first couple of chapters set the tone of this book — and I daresay the series — perfectly. As with the Stage Dive series, Scott chooses to use first person, past tense solely from Lydia’s perspective. This style requires a protagonist that can carry the entire novel, and for the most part Lydia fulfils this role.

As Lydia and Vaughn acknowledge — and act on — the chemistry between them, she’s also drawn to his circle of friends and family. She ends up helping Vaughn’s sister, who co-owns the dive bar for which the series is named, but which sounds suspiciously more like a hipster bar. But hey, I’m a sucker for hipster bars, so it works for me!

When an author forgoes the alternating viewpoint, it’s more difficult to redeem a hero with deep issues. Perhaps to accommodate the single perspective, the conflicts between Lydia and Vaughn are fairy pedestrian. At times, it was even difficult to believe, for example, that Lydia was deeply affected by her ex-fiance’s betrayal. I mean, of course, there’s residual anger and hurt and doubt, but because Lydia’s voice is so strong in the novel, I never truly believed that she was in danger of losing perspective about her self-worth.

Vaughn’s issue, if not groundbreaking, had the potential for some glorious angst. He’s still trying to reach for his dream of being a successful musician, but doing so means that he’ll have to move away, effectively putting Lydia second to his career. Intellectually, I could see that this was the story Scott was trying to tell, but it felt flat for the most part. The emotional angst between Lydia and Vaughn never got heartbreaking enough for me to cry over them, or to feel like anything was at stake except for a little heartbreak. After the very angsty Stage Dive books, that was a bit disappointing.

Instead of having One Issue To Rule Them All, it feels like Lydia and Vaughn navigate through a series of smaller emotional obstacles. I think it’s great that Scott tries to do something different in her book, but I miss the devastation I felt in the darkest moments of the Stage Dive books.

Nevertheless, I can’t deny that Dirty made me chuckle from start to finish. Scott has a potty mouth, which she gladly allows her main character to inherit, and the dirty talk — sometimes in good fun, sometimes as part of sexy times — is fabulous to read. It felt like I was reading a book for grown-ups.

There’s also a lot oral sex. Like, a lot. So there’s that.

I have no doubt this series will be hugely popular with Kylie Scott fans, and I suspect she’ll find new readers who are ready to read beyond the new adult years. (Lydia is twenty-five and is no longer studying.) The narrative voice in Dirty, with a broadly appealing sense of humour. Lydia is self-deprecating without coming across as disempowered, and if she displays some insecurities, well, that’s just a normal part of life. She reminded me of Jennifer Crusie’s contemporary heroines, but Lydia is less annoying.

Fans of the Stage Dive series will also be delighted by tidbits on the band’s backstory, plus a cameo from most readers’ favourite band member. I also give props to Scott for not only including a pee scene, but taking time to consider the issue of foot odour when taking off one’s shoes during sexy times.