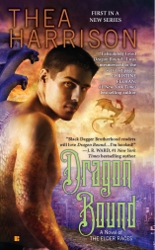 The perfect antidote for a paranormal romance slump. I have been sucked into another series!

Pia Giovanni has been blackmailed into stealing something from a dragon’s horde. After becoming the only being in the world to get away with it, she finds herself targeted by Dragos Culebre, a powerful member of the Elder Races. (Yes, he is a dragon. Yes, he lives in a big tower in New York.)

Dragos can’t believe someone has managed to steal from him, but instead of dismembering the thief he finds himself, well, feeling. At the same time, he knows that there’s more to this theft than meets the eye, and before long he and Pia are on the run, trying to unravel the plot against him.

First of all, I had to overcome a lot of resistance to reading this book. The lead character’s name is Pia, the name of my short, spunky, super curvy, bob-cut Asian ex-flatmate. While she has equally interesting adventures of her own, it was hard to imagine the name as a tall, lanky vegetarian blonde dating an almost seven-foot tall hunkachunkaburnin’ love (Okay, she’d do that too—Who wouldn’t?—but she is definitely not blonde!) and I worried I wouldn’t be able to get past that. Thanks to the amazing Decadence’s persuasive powers, however, I finally borrowed the book from her and promptly devoured it over a few train rides.

You may or may not have noticed that I’ve been in a paranormal slump lately. So much so that I can’t even bring myself to pick up J. R. Ward’s latest—which is ironic since we will freely admit to starting this blog partly so we could get J. R. Ward ARCs.

Thea Harrison’s Dragon Bound was the perfect antidote to that slump. Okay, so dragons have been done before. So have shapeshifters and hunky seven-foot tall alphas. What makes this book a breath of fresh air is just how everything is put together.

Pia is a respectable, admirable heroine who tries hard to get herself out of trouble, especially when it’s not really her fault. She’s spent most of her life lying low, trying to keep herself from being noticed. One nasty ex-boyfriend later and she ends up in the dragon’s den.

Dragos is, of course, the perfect alpha. He’s dark, he’s broody, and he has longish black hair that just brushes against his neck (sound familiar?). He has a personality, though, and it’s not all thuggish. Pia and Dragos come together naturally. It’s not one of those scenarios where suddenly they are thrown together and in two days, whoops, we’re walking down the altar. They do get there eventually, but it’s entirely plausible, at least in their world.

The secondary characters are priceless. Dragos has a bunch of boys who are not only sequel bait but amusing and fun to read. Harrison does a great job with the world building. The urban fantasy element draws you into the world but makes it believable, enough for you to be able to feel that you can live alongside them, the way they’re meant to in the novel. It’s fantastical but believable at the same time.

There’s a plot. It’s about people trying to overthrow Dragos (not that he really has a throne, but you know, he’s a powerful entity). It was a good story and I really got into all the adventure. Harrison does good on the adventure bits. And the romance bits. And the rest of it in general.

What didn’t I like about the book? I would have to say Dragos, while having that personality and being a great read and all, had too many similarities with all the other alphas I’ve read. I realise they all have to be a certain way, but he sometimes felt like an amalgamation of a whole bunch of alphas from other books. That said, I still really liked his character a lot.

A resounding YAY. I intend to get my own copy and, yes, I have been SUCKED INTO ANOTHER SERIES. (Thanks, Decadence.) It is all worth it though. I’m really enjoying this and would highly recommend it to anyone who is a bit over your average paranormal and wants something well written and just a bit different from the rest.