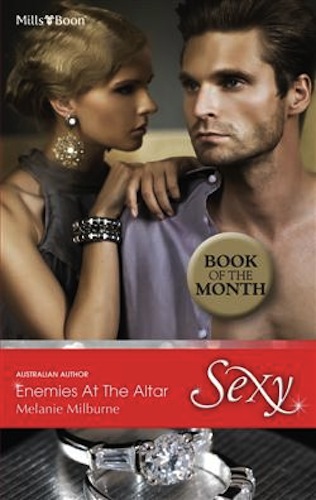 A great balance of genuine emotion and genuine wackadoo.

This review has been written by guest blogger Jodi as part of our series of reviews featuring this year’s finalists for the Romantic Book of the Year awards.

Jodi is a PhD candidate at Macquarie University in Sydney. Her doctorate is on virginity loss narratives in Western literature, so reading romance novels is technically work for her. No, she doesn’t know how she scored such a sweet gig either, and yes, she loves it sick. She also reviews theatre (you can find her reviews at Theatre From The Back Seat) and you can find her on Twitter at @JodiMcA, where she regularly talks about her research, livetweets books she finds particularly hilarious, and moans about citations.

My favourite thing about Harlequin Presents is that they are utterly unafraid to have premises that are completely batshit insane. Melanie Milburne’s Enemies At The Altar is no exception. Our alpha hero Andreas and wacky heroine Sienna hate each other a white-hot passion, and have done ever since they were young: Sienna’s mother was the housekeeper for Andreas’s family, and had an affair with his father while his mother was dying of cancer.

Despite this, when Andreas’s father dies, his will stipulates that Andreas and Sienna have to get married, or risk losing a bunch of property and money and stuff. Andreas gets his lawyers to look at this will and determines that there is no way around it. I think he needs to hire better lawyers, because that sounds pretty damn unenforceable to me—I checked it with my law-degree-having friend Rashmi, who described it as ‘a little dodge, yes’. But it seems all lawyers in Harlequin Presents land are either brilliant or terrible—the former can draw up iron-clad wills with the most cray-cray stipulations possible in them, and the latter can find no way around them even though they are clearly totes ridic. (Quite why Andreas’s father includes this stipulation is unclear. Maybe he was just seeing what kind of wackadoo stuff he could get his lawyers to do and died at the wrong time?)

And so we have our premise: Andreas and Sienna, mortal enemies, are forced into a marriage of convenience. Fun fact: the ‘marriage in name only’ convention became super popular in Mills & Boon in the 1950s. It was basically invented by Biddy Johnson, who was the editor of Women’s Weekly. Mills & Boon had a serialisation deal with her magazine that had a lot of money tied up in it, and so she had a lot of editorial influence. She did not believe in sexytimes in romance (Alan Boon said that she always wanted ‘a strong romance, with never any suggestion of sex’) but she did believe like whoa in creating sexual tension. If the hero and heroine were married, then they got to spend a lot of time under the same roof and put on their hornypants without it being somehow immoral. So. There you go. Enemies At The Altar is part of a long Mills & Boon literary tradition. Except Biddy Johnson probably would not have approved of their marriage…because there are quite a few sexytimes.

This is a classic story of the type that Sarah of Smart Bitches, Trashy Books describes ‘I don’t want to like you. I don’t want to like you. I can’t stop thinking about your hair. DAMMIT’, and that my friend Hannah calls ‘I hate you but I long to pat your jumper’. Andreas and Sienna loathe each other intensely, but are equally sexually fascinated with each other. This gets a bit confusing, actually, because when they were younger (Sienna 17, Andreas a couple of years older), he opened his bedroom door to find her lounging around on his bed in lingerie. He booted her out, and it’s not really suggested that he was tempted by the offer…but suddenly he’s all, I’ve never been able to stop thinking about you. Sienna has a…

…sex tape in her past, so maybe he watched that and was all like, Sex tape! What? I must watch it seven hundred times. Hate-watch. Totally.?

Andreas is a fairly typical alpha hero. (We know he’s the hero because when the first time the heroine sees him in the book, he’s taller than everyone else around him. And also because he has a penchant for giving the heroine affectionate nicknames in a European language—she gets them in Italian AND French! Two for the price of one! Bargain!) One of the things I liked about him is that he is just as affected, if not more affected, as Sienna by the sexual attraction between them. I’ve read SO GODDAMN MANY Harlequin Presents where the heroine is all like, What is this feeling, so sudden and new, I had the moment I laid eyes on you? I am being crushed in an avalanche of hornypants! washed away by a tsunami of badwronglustiness! while he is some kind of Zen master of control. Andreas is more like, Holy fuck, this chick drives me crazy, what can I do? I AM KIND OF FREAKING OUT RIGHT NOW GAH. This doesn’t sustain itself throughout the whole book, which made me a bit sad, and there is a bit towards the end that made me groan a little.

They are having sex. She is not a virgin, but she hasn’t had sex in a while. We get this little speech from Andreas as he is about to penetrate:

’I’ll take it slowly,’ he said. ‘You’re tiny and I don’t want to hurt you. Just relax, try not to clamp up. You’re meant to stretch to accommodate me.’

I’m sorry, but sex =/= appropriate time for anatomy lesson. I might make an exception if the hero actually was a gynaecologist, but even then it pisses me off. The whole ‘hero knows her body better than she does’ thing is a pretty annoying trope at the best of times, but when it actually stretches to ‘this is how your body works’ type lessons, it’s just a bit ridiculous. I would have loved it if Sienna just deadpanned, ‘No shit, Sherlock’, back at him.

One major problem I had with Andreas is that he slut-shames Sienna like WHOA. He refers to her variously as a ‘trashy little sleep-around slut’, ‘little hot-headed harlot’, ‘a little gold-digging slut’, ‘conniving little social-climbing trollop’, ‘shameless gold-digging whore’, and a ‘sleep-around gold-digging slut’. Dude. I get it. You don’t like her. But this is so not cool. And also notice how he calls her ‘little’ all the time. It reads a bit like he’s trying to infantilise her (even at the end of the book, he calls her an ‘adorable little scatterbrain’) and that is really just a bit creepy.

I really liked Sienna, the heroine. She does head into manic pixie dream girl territory a few times—she turns up at a funeral at the beginning of the book wearing ‘faded jeans with ragged hems’, ‘soiled trainers’ and ‘a T-shirt that had suffered a food spill’, and I wanted to slap her upside the head and be like, Girl, get it together! But she’s assertive and tough and sometimes she gets to win those verbal battles that the hero so often comes out on top of in Presents land. She’s the kind of heroine that gets shit done that needs to be done—she knows who she is, knows what she wants, and will make tough choices if she has to. The dark moment she goes through towards the end of the book makes total narrative sense: so much sense that I really felt like the ending was too sudden.

She leaves Andreas and he comes to find her. He confesses his love, and she’s all, Oh, OK, I love you too, and that’s the end. I feel like there needed to be more of a complex negotiation here. Also—completely off topic—she’s hiding out in Scotland, and Andreas is able to find her because when she talked to her twin sister on the phone, said twin sister heard bagpipes in the distance. AHAHAHAHAHAHAHAHAHA.

Overall, I quite liked this book. It has solid lashings of the crazysauce that make Harlequin Presents what they are, but some of the scenes between Andreas and Sienna feel really genuine and emotional. I particularly enjoyed the getting-to-know-you kiss they share about three quarters of the way through the book. Gorgeous. Although Milburne has a penchant for over-italicising things (seriously, the more you use italics, the less impact they have), she also has a really lovely turn of phrase. She has some great similes—when Sienna sees Andreas at the beginning of the book, ‘her heart was flapping like a frantic fish suddenly flung out of its fishtank’. Don’t you know just how that feels? Similarly, when Andreas hears that he and Sienna are going to have to get married, the feeling is described as, ‘It was like being shoved backwards like a toppling bookcase.’ My favourite line, though, is a description that Sienna gives of Andreas: ‘He hadn’t been born with just a silver spoon in his mouth, but an entire dinner service.’ Perf.

If you’re a regular Harlequin Presents reader—ie you can suspend disbelief for some of their madder plots and heroes behaving like douchecanoes won’t make you throw the book across the room—I think you’ll really enjoy this one. Andreas is a fairly standard hero, but Sienna is a pretty refreshing heroine. It’s got a great balance of genuine emotion and genuine wackadoo.