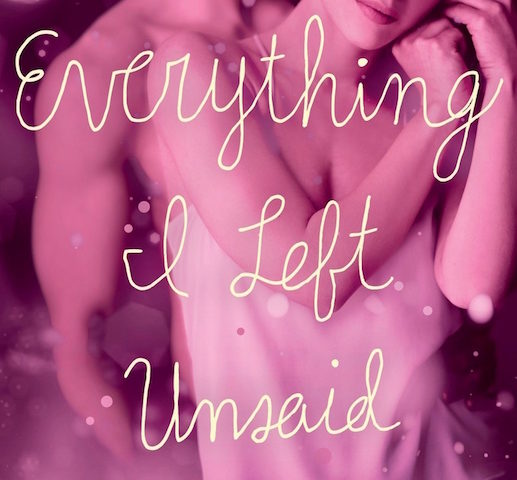 Review of: Everything I Left Unsaid

Have you ever had a book you absolutely adored betray you on the final page? Serial books are the absolute bane of my existence at the best of times — when each book has a self-contained ending — but when I’m blindsided by a cliffhanger, they are the absolutely fucking worst.

This is something I was reminded of last month. The culprit was M. O’Keefe’s [ T | F | I | W ]  Everything I Left Unsaid, but strangely, as angry as I was over the abrupt ending, I still want to recommend it people.

Having run away from her abusive husband, Annie McKay moves into a tiny trailer park in the boonies of North Carolina, looking to start a brand new life. So when she discovers a ringing mobile phone stuffed between the couch cushions in her new home, she answers it. On the other end of the line is a man with a super hot voice, who asks her to spy on her elderly neighbour for reasons unknown.

The dude with the hot voice is Dylan Daniels. (I know. I definitely chose to forget that was his full name until just now when I had to write it.) Dylan lives a somewhat isolated existence as a filthy rich mountain hermit. Yes, that is the technical term. And he finds Annie (who for reasons of safety and general intelligence tells him her name is Layla) completely fascinating. Yet, when Annie refuses to spy for Dylan and asks him never to call again, he actually listens.

I honestly can’t tell you how happy it made me that Dylan, as the hero, respected the boundaries of the heroine. Especially because of how incredibly vulnerable Annie is at the start.

Which brings me to the second thing I loved about Everything I Left Unsaid. O’Keefe takes her time with Annie’s healing process. One of Annie’s first flirtations with regaining her autonomy isn’t to go charging into phone sex with Dylan. It’s actually to buy a copy of Fifty Shades of Grey [ Review ] at a library book sale. Having spent years being told what is and is not appropriate reading material, she makes the decision to buy a dirty book. And she genuinely enjoys it. It’s that enjoyment that leads her to taking another step forward in autonomy and reclaiming her independence by calling and flirting with Dylan. And THAT’S when phone sexing comes in.

Seriously. There is A LOT of very hot, incredibly well-written phone sex in this book. Annie and Dylan remain apart for a vast majority of the novel, instead only ever speaking on the phone. And because of this layer of anonymity (and that she continues to use a pseudonym), Annie feels free to enjoy a little sexual exploration.

Not with him — this stranger on the phone.

This is why I called, because I don’t know how to find these things on my own.

“Are you telling me I shouldn’t?”

“No, but you said you scared yourself last time we talked.”

The trailer was small and dark, and it was as if there were only the two of us in the wide world.

“I did,” I murmured, feeling almost powerless. But in a good way. Like I was giving up the power instead of having it taken from me. The act of willing surrender made all the difference.

“Then talking to me is brave.”

Look, I know I’ve alluded to it already, but I want to be clear that this is dark romance. It’s not the absolute darkest, but it’s sure as fuck not light. Think Joanna Wylde or Jackie Ashenden. Except I think the hero is nicer than theirs normally are? But the point is that there are strong themes of domestic violence, both in relation to Annie and one of her neighbours in the trailer park.

And actually, the fact that all this is set in a trailer park is alternately so annoying and yet so amazing. When you think about trailer parks, ‘romantic setting’ probably isn’t the first phrase that springs to mind. But for Annie, it’s a place of safety. I honestly wish I had the time to fully research and write an essay on the trailer park setting alone. I’d really love to unpack the tropes and subversions O’Keefe played into … except Kat recently made fun of the verbosity of my reviews so maybe that’ll be a future blog post? But I digress. What was interesting was how fleshed out life in the trailer park was.

[Kat’s note: Yes to essays about the subversiveness of trailer park romances, please!]

It would have been easy for O’Keefe to surround Annie with ‘poor people’ caricatures in the trailer park. But instead, the secondary characters are complex and interesting. They could easily (and in fact in some cases do) carry their own books within the series. I adored Joan, the snarky and abrasive stripper who lives next door to Annie. When Annie tells Joan she thought about stripping to earn some fast money, Joan’s response is that she’d need a boob job first. In short, she’s not interested in dispensing life advice to anyone. She’s fucking glorious.

I think the very fact that this is definitely a series that follows different couples is why I was blindsided by the cliffhanger ending. It’s also why it’s so strange that Annie and Dylan’s story is written in two parts. On one hand, I’m incredibly, intensely glad O’Keefe wrote it as two full-length novels. But on the other hand … I wish she hadn’t?

O’Keefe took a huge risk in keeping her hero and heroine apart for so much of the novel, but it was one that I completely respected. The level of intimacy (of the emotional and the sexual kind) Dylan and Annie reach during their phone calls made it easy for me to accept they were headed for an HEA. And honestly I’d have been interested to see O’Keefe back herself more decisively. Which isn’t to say that I didn’t read and enjoy the hell outta the follow up, The Truth About Him [ BT | Amz | iT ]. It’s just that without that final complication coming in right at the end of the first novel there was definitely scope for a satisfying, emotionally just ending.

I guess what I’m trying to say is fuck cliffhanger endings. But also, if you love your romance novels dark and a little dirty, M. O’Keefe has you covered.

Content advisory: It fucking ends on a fucking cliffhanger. Also, there are strong themes of domestic violence.

You can find an extract of the book here. Published by Bantam.