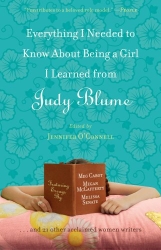 Are You There God? It’s Me … Wandergurl

Growing up in the 80s and 90s, Judy Blume was a staple read for me. I had all her books (except, strangely, the Fudge series) and would read them over and over again. Just As Long As We’re Together was a particular favourite of mine, and it was next to my bed so that if I had a nightmare I could turn the light on and read it to feel better and get back to bed. While some of the books were a little bit dated even then (for example, sanitary pads no longer had belts…) the essential themes and relationships in the book endured. There were still bullies, fights with your best friend, growing up facing issues around race, body image, boys, parents, school work … these were the things that Judy Blume knew so well.

I grew up in a tiny country in Southeast Asia with a population the size of Australia. Back then we didn’t get a lot of young adult books or children’s books, and Judy Blume was one of the few authors the bookstores stocked completely (along with Sweet Valley High, Christopher Pike and R. L. Stine … now you know what I read as a child!). I’d like to think that even if I didn’t have exactly the same problems that Blume’s characters did—I never had to move to Florida to avoid snow, for instance—the things we went through were similar. Sally J. Freedman and I would imagine ourselves doing bigger and brighter things. I felt the pressure to do well at school like Blume’s characters did, and I knew what it was like to not exactly be bullied but sort of be on the sides, like in Blubber. (Although I was never quite as excited to get my period as Margaret was!)

Everything I Needed to Know About Being a Girl I Learned from Judy Blume, edited by Jennifer O’Connell, is a fitting tribute to Judy Blume. With essays by so many authors that cover practically every Blume novel, it brought me back to my childhood, curled up in bed with Oreos and milk, rereading my Judy Blumes. (My dog-eared copies are still at home!) Most authors talk about how she helped them understand the things that they went through in their lives—how Blume’s stories helped them realise that things would be okay—because it turned out okay for the characters in her novels. Somehow you knew that if Judy Blume said it was going to be okay, then it would be.

I would highly recommend this for anyone who grew up reading Judy Blume, whether or not she touched your life as much as  those of the authors of the essays. It brings back the memories—the nice fuzzy feelings of nostalgia—of childhood, whichever decade that was, reading your Judy Blumes. If you’ve never read Judy Blume, however, I’d start with one of the classics—Are You There God? It’s Me, Margaret, Then Again, Maybe I Won’t (a banned book!), Deenie—the most discussed books among all the essays, I think—or Just As Long As We’re Together. I think I might head out to the library and grab one, just for memories’ sake :)

Title: Everything I Needed to Know About Being a Girl I Learned from Judy Blume (excerpt)
Edited by: Jennifer O’Connell
ISBN: 9781439102657
Release date: June 2009
Publisher: Pocket (Simon & Schuster)