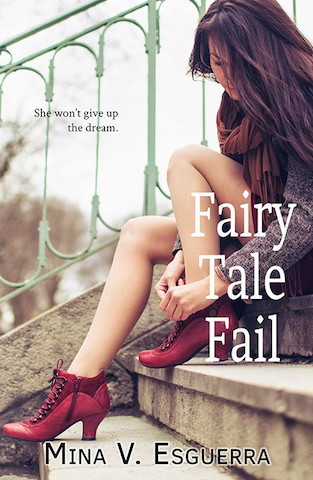 My first foray into Filipino chicklit explores breakups, floods, and what happens when your fairy tale life doesn't turn out as you expect. A great introduction to a new-to-me author. My first foray into Filipino chicklit explores breakups, floods, and what happens when your fairy tale life doesn’t turn out as you expect. A great introduction to a new-to-me author.

If you follow me on Twitter, you’ll know that I started this year off with a huge Wattpad obsession. But now I have a dilemma: how do I talk about the stories I read on that platform? For the most part, what’s available is unedited — even when the story is eventually published in print, the version that remains on Wattpad tends to be the first draft rather than the polished version.

So I thought I’d start with an easy one. Fairy Tale Fail by Mina V. Esguerra won the 2012 Filipino Readers’ Choice Award for chicklit, and the final version of the story is available on Wattpad. Filipino chicklit is a different beast to the chicklit that I’m used to reading. For one, it’s much less comedic and more romancey, although the focus remains on the central female protagonist rather than on the romance itself. There are also cultural differences in the themes, the language, and the steam factor, but for the most part I think that will either be super obvious or surprisingly transparent, and I think it’s probably better to leave that to each reader to discover for themselves. It could be charming or it could be annoying — YMMV.

When Ellie Manuel’s boyfriend Don dumps her — in her favourite church, no less — for not being ambitious enough, she can’t let go of the hope that they might one day get back together. After all, good guys don’t break up with their girlfriends for no good reason, and now that she has a promotion and getting accolades at work, maybe he’ll reconsider his decision. But more than a year after the breakup, Ellie is making new friends, including the office heartthrob Lucas, aka the Rock Star. Finally, Don seems to want Ellie back — and Ellie has to decide who exactly is the true love in her personal fairy tale.

I may have decided to stay away from Don but I didn’t change my mind about him. I knew I wanted a good guy, I knew I wanted him, and… our breakup? First test. Ignoring me after I told him I still loved him? Second test. I was probably going to be tested three times, or as many times as necessary, but if I loved him as I said I did, I wasn’t going to waver. He would come around, eventually.

The romance in Fairy Tale Fale is a slow burn, and readers looking for steam should know that there’s no sex on the page at all, although there’s implied sex before marriage. I’m assuming this is still a big thing for younger Filipino readers, though I could be wrong. (I haven’t lived there for almost 30 years.) Ellie’s internal monologue slows down the pace too much for my liking at times, but for a relatively short novel (Wattpad shows 16 chapters) Esguerra crafts a surprisingly well-rounded story with a believable character arc for Ellie. Despite the ‘Rock Star’ nickname, Lucas is a low-maintenance, beta-type hero, and the romance progresses via the friends to lovers trope rather than bad-boy meets good-girl.

Ellie’s pursuit of happiness with Don is drawn out a little longer than I would have liked, given that Don behaves like a dick for most of the book. At the same time, I think the book assumes that the reader understands the cultural pressures underlying a Filipino heroine’s desire to hang on to her first love. Esguerra captures the difficulty of breaking up with someone who moves in the same social circles, and that part felt more devastating to me than the actual breakup.

I’m a huge fan of forced proximity to move a romance forward, and Esguerra does it in a uniquely local way. If you’ve never lived through a tropical storm, it’s pretty much as described in the story. People get stranded in the highway due to flooding, people beg friends nearby if they can sleep over, and stepping into an uncovered manhole can actually kill you.

I used to like playing in flooded streets until it occurred to me what was on a regular Makati street when it was dry. Cigarette butts. Dog poo. And all sorts of other crap that shouldn’t be on the ground. Didn’t matter how it looked or where it was — one piece of crap was all it took for flood water to freak me out.

“Fuck fuck fuck,” I said, when my foot went down an unseen pothole again.

Lucas held out a hand so he could help me jump over another puddle. “Nice,” he said sarcastically. “I can see why good guys are attracted to you.”

“Shut up,” I retorted. “I don’t like walking in a pool of dog poop. And rat pee.

“But see, you just agreed to go somewhere with a shower. It all works out.”

As a story of self-discovery, Fairy Tale Fail doesn’t try to do anything complicated. But within the social context of its heroine, I think it does some fairly remarkable things. Esguerra doesn’t try to dismantle Ellie’s social constraints — she gently pushes and prods until it becomes obvious that the fairy tale is an illusion. I don’t know if this will be apparent to non-Filipino readers, but as I have the luxury of reading Fairy Tale Fail within that framework (or a close approximation, give or take 30 years), I think Esguerra does an excellent job of justifying Ellie’s final choice between Don and Lucas.

Content advisory: This book will have you pining for your office crush.