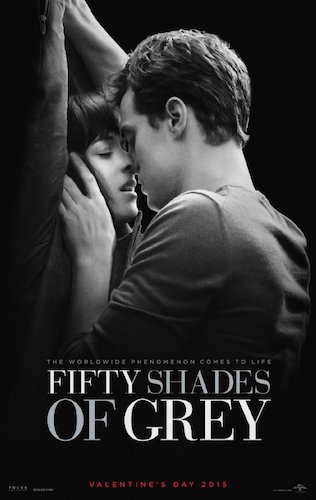 Better than the book, not as hardcore as you probably expect, and people determined to dislike it will still dislike it. The film never forgets its most important audience — the fans of the book.

Jodi and Kat were on 2SER’s Double X program talking about Fifty Shades of Grey and female sexuality with Rudi and Jess. You can listen to the podcast here.

I went to see Fifty Shades of Grey with absolutely no expectations. I say that in all sincerity, as someone who has only managed fifty pages of the first book (I’m still not calling it a DNF because I hold out hope that one day I’ll get back to it) but was open to the possibility that the film, unencumbered by E L James’s prose, can offer a more compelling way of telling the same story.

Only a few minutes into the film and it’s clear that this is a different beast to the book. Unlike the book, which revolves around the fantasy that is Christian Grey, Dakota Johnson’s Anastasia Steele is the heart of the film. Her Ana is gauche but charming, and Johnson infuses the dialogue — which is frankly laughable in the book — with humour and a kind of cheekiness that serves as a wink to fans while acknowledging how ridiculous some of it might be. Even the lip-biting isn’t too grating, although it does get a bit tiresome after a while, and I suspect was only kept in so that Christian can say some of the more popular lines from the book.

In constrast, Jamie Dornan’s Christian Grey is flat, insincere and lacks the complexity needed to make the romance work. His Christian just doesn’t come together — not his awkward way of speaking, or the fact that the camera just could not seem to find a good angle for his face (because, yes, the shirtless scenes were just fine), and not the perplexed look that seemed to vex his character for the entire film.

Plot-wise, there isn’t much to tell. This is a romance, with faux-BDSM as a foil to keep Ana and Christian apart. That’s it, and that’s exactly what I love about the film. There is nothing pretentious about what it tries to be, and it expects the audience to understand this. For this reason, I suspect the film will be difficult to appreciate if you don’t understand the appeal of the alpha hero pursuing the ingenue. Screenplay writer Kelly Marcel pares back James’s original text to present a more subtle story, but it also relies on the audience to fill in the blanks. Some of the problematic elements — such as Christian suddenly appearing in Ana’s apartment after she appears to brush him off — are less troubling when viewed from the lens of a romance reader (or audience). Surprisingly, I was more than happy to fill in the blanks with the assumption that this is indeed a romantic film, whereas in the book, which is entirely in Ana’s perspective, Ana’s internal monologue is such that I wondered what he saw in her. The film’s Ana is a much more sympathetic character, and this was both unexpected and satisfying.

Director Sam Taylor-Johnson does an amazing job of translating some fairly tedious prose to screen, teasing out some lovely nuances and lingering on interesting themes in a way that James wasn’t able to do, possibly because she wrote the story as a serial. Fifty Shades of Grey is a romance — the lowest common denominator in fiction, if some are to be believed — but by god, it’s a beautifully made film. Again, I love this. Aesthetically, Fifty Shades of Grey is gorgeous, dominated (ha!) by sultry blues that set up an obvious contrast to the Red Room of Pain, in which Christian keeps his BDSM toys. Everything and everyone is stunning on screen, and this artifice is a constant reminder that the story is merely fantasy.

I don’t usually notice the soundtrack, but it was definitely a feature of the film. The musical score is also fabulous, with the possible exception of the elevator music playing throughout Ana’s interview of Christian — that was a little distracting. Beyoncé’s Crazy In Love is perfectly timed with the first crack of the riding crop.

The story does suffer from the some of the same issues as the book. Ana is a twenty-something woman whose tastes and habits are a little…nanna, though Dakota Johnson almost manages to convince me that her character is merely quirky rather than anachronistic. Christian comes across as borderline — or if I’m being honest, over the line — stalkerish, and Dornan just tries too hard and looks uncomfortable all the time. There is no subtext to his high-handedness, and it falls to Johnson’s Ana to push back and display Ana’s independence and agency against Christian — which she does in subtle, wonderful ways. I mourned the missed opportunities to give Christian a personality, a sense of humour, and an intensity that would convince me he was someone that Ana would fall in love with. What Gabriel Macht’s Harvey Specter or Ian Somerhalder’s Damon Salvatore could have done with this character!

The film keeps some of the book’s cheesiest lines, and again, Ana pulls them off but Christian does not. His ‘Laters, baby’ is so excruciatingly awkward that I have no doubt Dornan himself was embarrassed to be saying it. My favourite quote, ‘Necrophilia is not my thing’ is a nudge to viewers aware of the book’s origins as Twilight fan fiction. There are similar homages to the book throughout, though some will no doubt roll their eyes at the lip-biting and the pencil nibbling and at lines like, ‘I don’t make love; I fuck. Hard.’ A man in the theatre kept clearing his throat whenever Christian would say such doozies, and I wanted to smack him for it. Cheesy they might be, but the film does not forget its most important audience — the fans of the book.

That said, the camera is at times a little too conscious of its audience when lingering on Christian, making Dornan’s scenes look unnatural and stilted (or it could just be Dornan; the jury is still out). The moment when Ana sees him standing in front of a helicopter was, I admit, heart-stoppingly thrilling, and there’s a very Disney-like theme to their over-the-top first date, culminating in a visit to the Red Room of Pain, which Christian obliquely calls his playroom, and about which Ana asks, ‘What? Like your X-box?’ before being allowed inside.

The first sex scene — in which Christian is so overcome by Ana’s magical virginal hooha that he forgoes all thought of bondage and has sweet, romantic sex with her on his bed — is everything that is sex in romance. Later, Ana wakes up, wraps herself in a blanket and walks towards Christian at the piano, and I thought we would get a piano scene to rival Pretty Woman, but he picks her up and takes her back to bed.

When Ana and Christian begin negotiating the contract for their dom/sub relationship, it gets a little strange. I felt that some of the items in the contract would be difficult to Ana to understand, much less consent to. And then there was the spanking, which should have been cut out altogether because it was so cringe-worthy I was literally screwing up my face while watching it. I’m not sure anyone could have made that scene sexy, and it was the only time I felt the male gaze in the camera. Finally, Ana playfully brushes Christian off via instant message, and he shows up at inside her apartment unannounced.

This is the point where a lot of people would yell, Stalker!, and urge Ana to leave right now. I’m not one of those people, and it’s all due to Johnson’s portrayal. Her reaction to Christian, and her insistence that she will take as much time as she needs to think about her decision, allows me to assume that she has given Christian implicit permission. (I just assumed she gave him a key to her apartment — after all, she happily allowed him to enter her magical virginal hooha.) There were two instances where I felt that Christian was much too domineering: when he sells her car, and when he follows her when she visits her mother (played by Jennifer Ehle, who many might recognise as Elizabeth Bennet in the BBC adaptation of Pride and Prejudice). Again, it fell to Dornan to put some context around Christian’s actions, and he couldn’t pull off a sympathetic hero with control issues.

Despite the assumption that Fifty Shades of Grey is primarily a skin flick for women, most of the nudity involves Johnson. I love that when Christian slowly takes off her trousers, we see hair on her legs, and she has pubic hair, albeit ever so tidy. Her skin is smooth but not airbrushed, and when the sex gets vigorous, it at least seems as though the characters are getting hot and sweaty. There are some sly peeks at Dornan’s more intimate bits (bum shots are always a nice back-up), and I read somewhere that there is penis tip involved [Edited to add: Apparently, it’s the TOP of his penis — the bit you see when he unzips his jeans (NSFW). Thanks to Kaetrin for the link!], but I can’t recall seeing it — I could have been writing my review notes at the time, which is a testament of how seriously I’m taking this, people!

Somewhat disappointingly, the sex scenes are fairly vanilla with a touch of light bondage. (For the curious, check out the list of sex scenes excluded from the film.) Christian’s playroom lacks anything really scary — even the handcuffs look padded. The scenes linger more on the setting up the scene — Christian tying knots, or attaching restraints. And while I can see how they could be triggering, the sex scenes did not come across as abusive — Ana’s consent and agency were very obvious for me. The film is at pains to show her challenging Christian’s behaviour, both in and out of the bedroom.

From there, the film races to the end beautifully. The final scene is tight and tense, a beautiful juxtaposition against Ana’s first meeting with Christian. The ending would have been perfect if Ana had used her safe word outside the Red Room, but sadly, this ending was apparently nixed by EL James. It didn’t really matter in the end. I can’t wait to see what happens next.

Fifty Shades of Grey is better than the book, and if you’re mildly curious about the story, it’s worth a trip to the cinema. The camera work is gorgeous, the direction is tight, and Jamie Dornan’s wooden performance is more than offset by Dakota Johnson’s surprisingly nuanced treatment of a protagonist that, in the original text, is fairly one-dimensional. The sex scenes are nowhere as hardcore as people would have you believe. And while those determined to dislike it will still dislike it, the film never forgets its most important audience — the fans of the book.

Who might enjoy it: Fans, curious bystanders, and possibly the partners they drag along

Who might not enjoy it: People who don’t understand that it’s a film for fans of the book