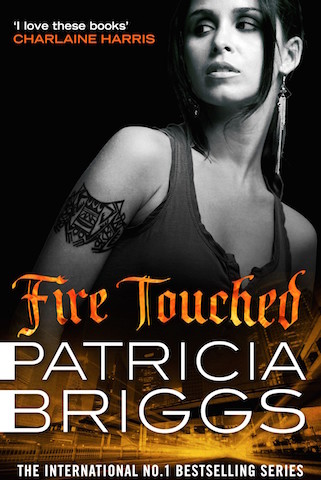 Fire Touched hearkens back to earlier books in the series. The cast might be a little crowded, but Mercy always holds her own. Fire Touched hearkens back to earlier books in the series. The cast might be a little crowded, but Mercy always holds her own.

An advance reading copy of this book was generously provided by Berkley via Netgalley.

Disclosure: Kat hosts the Heart to Heart podcast for Destiny Romance. Destiny and Berkley are both imprints of Penguin Random House.

Urban fantasy has always been very hit or miss for me. It relies heavily on the female protagonist’s voice, and when it’s an open-ended series with strong romantic elements I tend to struggle past the first three books. The Mercy Thompson series by Patricia Briggs is the only one that has stuck with me.

Fire Touched is book 9 of the series, and I think it’s safe to say that most of its readers will already be heavily invested in the series. I wouldn’t recommend it as a place to start if you’re new to Briggs’s work, but it’s not a dealbreaker as long as you’re not fussed about references to previous plot points and can gloss over implied relationships between characters. If you’re the kind of reader who likes to absorb the worldbuilding in urban fantasy, you’ll need to start with the first book, Moon Called, and also follow the related series, Alpha and Omega.

When the local police request the Columbia Basin pack’s help in dealing with a troll (on a bridge, naturally!) an unusual boy called Aiden comes to the werewolves’ aid. In return, he asks for protection against the fae. Aiden is a human boy who was trapped in a magic-touched world, and when he escaped, the fae tortured him in an attempt to understand his power. Mercy offers protection on behalf of the pack, which has the unfortunate consequence of pitting the werewolves against the Grey Lords.

For existing fans of the series, Fire Touched hearkens back to the cadence of earlier books. There was a point in this series where the dynamics between werewolves, vampires, fae and human became so convoluted that the worldbuilding started to become murky in my head. In this book, there are fewer antagonists, and the politics are mostly focused on finding a way to co-exist with the fae. Mercy is most definitely the star.

A lot of old friends make an appearance, too, though vampires largely take a backseat. If you keep a cheat sheet to put names to characters, you’ll probably need it — that or reread the earlier books first. (Which, let’s face it, wouldn’t be the worst way to spend a reading week.)

But I don’t read this series for the worldbuilding, entertaining and well-developed though it may be. I read it for its protagonist’s voice, and I’m continually amazed that Briggs can keep Mercy’s story consistent without sounding like a rehash of previous books. Marriage is usually the death knell for couples in a romantic series — that, or their HEA is put in jeopardy to raise the stakes — but Briggs doesn’t take the easy way out. Mercy and Adam’s relationship, though stable now, reflects the insecurities and fears that any marriage goes through, and these are woven into the larger story that Briggs is telling.

There was a lot of romantic angst in the previous book, Night Broken, and I believe there was a lot of anger at what readers felt was Adam’s unwillingness to stick up for Mercy against his ex-wife. If you’re one of those readers, be assured that Adam more than makes up for it in Fire Touched. Briggs has been very consistent about what Mercy will allow Adam to do on her behalf, but it all comes to a head very early in the story. To any series fan who still resents Adam: I promise you’ll love him again!

Aside from the reliance on backstory to explain the plot, the other big weakness in the story is the deus ex walking stick — though I will say that Briggs finds a very neat way to neutralise this by the end of the book. More broadly, Mercy finds help very conveniently from various sources, which can be a little frustrating. Again, though, Briggs provides a good defence for these within the context of the story — aid from friends is a consequence of all the work Mercy did in the earlier books and which many other characters at the time considered to be foolish risks and decisions.

Some interesting characters are developed in Fire Touched. Aiden, of course, but also Joel, the tibicena, and most surprisingly, Jesse. There’s no shortage of humorous scenes and one-liners, as well as some very sweet and sexy moments between Adam and Mercy. Only Patricia Briggs would think of pitting Mercy against an acquaintance who is into multi-level marketing, and then ending the scene with a sexy private joke between Mercy and Adam. I ship this couple so damn hard, and Patricia Briggs is one of the very few authors I trust not to throw their HEA back in my face. I can’t wait for book 10!

You can find an extract of the book here. The Australian edition of Fire Touched is published by Hachette.