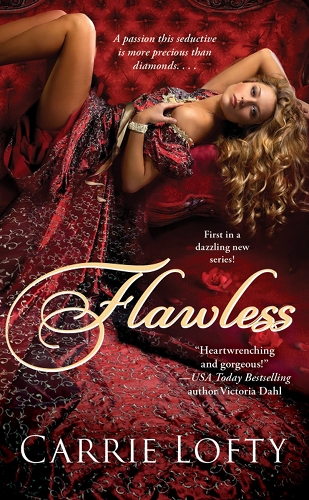 A second chance romance filled with adventure and set in a South African diamond mine. Not your conventional romance.

Lady Vivienne Bancroft’s father, Sir William Christie, died and left each of his four children an inheritence. For them to claim it, each one has to take a part of his business and make it successful. Vivienne ends up with a diamond mine in South Africa that she has to make profitable in a year.

Miles Durham, Viscount Bancroft, and his wife have been estranged for a few years. He wants to get her back and somehow prove himself to her by taking part in making the venture profitable.

I love adventure romances in your not so average settings! It’s not often that you get a romance in colonial South Africa—in a diamond mine, no less—and for that alone I bought this book. (Okay, Rendezvous also recommended it in their newsletter.) It didn’t disappoint.

Vivienne is quiet and strong, and she has been on her own for quite some time. All she wants to do is get back to her life, her lovely New York brownstone, but somehow she’s ended up in Africa with her ex.

Miles is really a rogue—the kind who gambles and who squandered her dowry and had nothing come of him. So it’s no surprise that she dumped him because she realised he was a lying, cheating cad. South Africa is his redemption in more ways than one. He’s actually a competent, capable bloke (I guess he’d be a bloke if he didn’t have a title) and I like how Carrie Lofty is able to show Miles developing self-awareness and actual balls, not just the ones attached to his nether regions.

Vivienne and Miles become more aware of what they’re capable of. In South Africa they’re not just society people—they actually have the capacity to make a difference, and not just profit wise. To me, this arc is what anchors the book.

Their story and growth as a couple is intertwined with their growing diamond mine and the fledgling industry. The story sounds well researched and the bits of history and facts are quite interesting. I also liked the way Lofty uses the secondary characters to show the life and times of the Victorian era—they provided insight into history, how people treated others, and why they did so. The adventure of the setting matched the adventure of Miles and Vivienne getting to know each other again and discovering that each person is more than what they seemed, and in Vivienne’s case, that Miles might be worth that second chance.

If you like adventure romances with just the right amount of character and insight, this one is for you.

Who might not enjoy it: Readers looking for a conventional romance