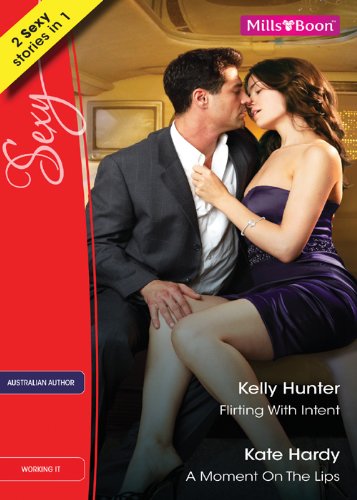 Review of: Flirting With Intent

Starts off beautifully, but sizzling chemistry can't save a couple that feels like they won't last six months, let alone a lifetime.

Starts off beautifully, but sizzling chemistry can’t save a couple that feels like they won’t last six months, let alone a lifetime.

It’s no secret that, despite discovering her work only last year, Kelly Hunter is one of my favourite category romance authors. Flirting With Intent doesn’t disappoint in the writing department—it includes some beautiful, subtle scenes—but there’s just something lacking between the couple in this book.

It’s not chemistry, because from the moment Ruby Maguire and Damon West meet, the pages fairly sizzle. They embark on a high intensity, high risk affair after their attempts to flirt without intent dissolve in a blaze of kisses and hot limo sex—mostly off-page, but that doesn’t diminish Hunter’s ability to convey the passion between them.

Ruby’s father disappeared after being implicated in financial fraud, and she’s in a kind of limbo. She has a cushy job, courtesy of a Damon’s father, but it’s only a temporary gig while she recovers her equilibrium.

Damon is a computer hacker and his entire professional life is secret and possibly dodgy, depending on your ethical boundaries. He can’t offer the one thing Ruby demands even from a fling—honesty.

Up until Hunter fleshes out the internal conflicts for these characters, she had me entranced. Ruby and Damon are quick, funny and their dialogue is filled with innuendo and layers of meaning. I love that.

But the plot makes for unbelievable characters, irritating twists and, most disappointingly, a weak ending. There’s no way I can believe that a lawyer can be with an unethical hacker without it eventually destroying her career and, more likely, them ending up in gaol.

Hunter doesn’t fully explain the nature of Damon’s work, so I’m left with the impression that although he’s working for the good guys—whoever they might be—his work is shady enough that his safety is always an issue. The actual hacking methods that Damon uses are also suspect. (Some people get irritated by badly characterised sheikhs or military operatives; hackers are my pet peeve.)

Not to mention that fact that he has to involve Ruby in the shady business because she accidentally finds out what he does for a living. That’s…really not heroic, and for me it’s more problematic than the thing he later does and to which Ruby takes exception.

As for Ruby, she’s just too perfect, really. I love her character, but Damon didn’t deserve her. I felt that in their relationship, she would have to make most of the compromises.

One last thing: the story is set in Hong Kong and Sydney. Never mind that the protagonists are both Westerners—I love that Hunter explores these cities in her stories and gives them a bit of their own character.

The story starts off beautifully, but sizzling chemistry can’t save a couple that feels like they won’t last six months, let alone a lifetime.