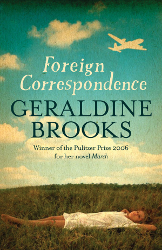 A lovely if at times a bit sad armchair read if you’re looking for a bit of recent history and adventure.

In line with Travel Tuesday (#traveltuesday) on Twitter, I’ll be reviewing a travel book once a month, since I read so many and love them so much. Fortunately, Australians love to travel, so there’s no shortage of books to choose from for Aussie Author Month.

Geraldine Brooks grew up in a sleepy neighbourhood in Sydney without a car, without ever making an international phone call or getting on a plane. To explore the world from her house she made pen pals and wrote to people from New Jersey, France, Israel and even not so far away in the Eastern Suburbs. Later in life, she decided to meet them all.

This story isn’t just about Brooks—who later became a foreign war correspondent—meeting her pen pals and finding out what became of them, but it is also a capsule of history of what Sydney was like in the 60s and 70s when she was growing up. Having only moved to this country recently it was nice to see what it was like back in the day, when the first wave of non-blonde, blue-eyed people came. Brooks talks about her family and neighbours with fondness and her interactions with her pen pals showed how the typical Australian viewed the outside world and how they viewed Australia.

Her relationships with her pen pals are quite poignant, especially with Joanie, her New Jersey pen pal, who suffered from anorexia. (Brooks maintains a friendship with her family to this day.) Her adventures reconnecting with her pen pals are also interesting, given the paranoia in this day and age, and I was actually surprised to find everyone welcoming and not suspicious of this random woman searching them out!

I thought this book was lovely, even if at times a bit sad, and would recommend this for an armchair read for someone looking for a little bit of recent history and adventure, not just from out in the wide world but also from their own backyards.

P.S. Dear Amazon.com, I can’t believe you called Concord the suburb provincial. Was it ever really provincial even in the 60s?

Geraldine Brooks will be doing an Australian book tour in June for her upcoming book, Caleb’s Crossing. For more details, check the author’s website.