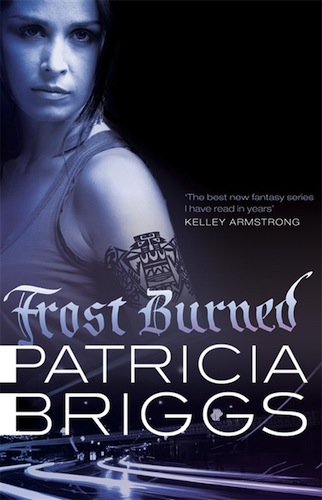 (Mercy Thompson, Book 7) Mercy Thompson fans who have been eagerly anticipating this book will love the complicated twists of the plot, and romance readers will absolutely adore Adam. Mercy Thompson fans who have been eagerly anticipating this book will love the complicated twists of the plot, and romance readers will absolutely adore Adam.

I may have mentioned (a few hundred times) that Patricia Briggs is one of my most recent author finds. Yes, I’m late to the Mercy Thompson party, but believe me, I’ve made up for lost time! At book seven—not counting the Alpha and Omega spin-off books—this series is just as exciting and perhaps even more romantic as when it all began.

The story starts off deceptively gently, with Mercy having some bonding time with her new stepdaughter, Jesse. When they’re involved in a car accident, Mercy is puzzled and then increasingly alarmed when she can’t get in touch with Adam or anyone else in the pack.

It turns out that Adam and most of the pack have been ambushed. Ben, who managed to escape, tells Mercy what happened, and Mercy has no choice but to tap every resource and contact she can draw on for help. This includes using Marsilia’s shiny new Mercedes AMG to transport a bleeding werewolf—and that’s just for starters.

Readers who love Mercy’s narrative voice won’t be disappointed with Frost Burned. The first part of the story is dominated by Mercy trying to work out what’s going on around her and making the best of a bad situation. Her choices between bad and worse provide fodder for snark as well as tension.

It was a delight to see some of my favourites secondary characters playing significant roles in the plot. Asil, a prominent character from the Alpha and Omega books, makes an appearance, and Briggs resists the impulse to bombard us with backstory or extraneous detail. I’m quietly hopeful that he’ll eventually get a happy ever after.

It’s difficult to reveal more of the plot without spoilers. Suffice it to say that the ending of Fair Game (Alpha and Omega, Book 3) is the catalyst for the events in Frost Burned, although Briggs doesn’t reveal exactly how until much later in the book. The plot also builds upon Mercy’s Walker magic, which was the big focus of the previous Mercy Thompson book, River Marked. At the hands of a less skilled writer, this story would have fallen apart. The pace is frenetic, the plot convoluted and the stakes ever escalating. Briggs manages to keep it all together—just. Readers who dislike convenient revelations of new magical abilities or the use of weapons so powerful as to be practically invincible might take issue with some aspects of the story, but I was so caught up in the moment while reading the book that any weakness in the plot was quickly forgotten.

It’s also almost impossible to guess the villain of this story. On one hand, this makes for a refreshing change as so few authors do suspense plots well; on the other hand, the red herring can become tiresome. By the end, there’s also a sense that the villains weren’t wasn’tquite as powerful as I was hoping they’d be, although other plot twists made up for it and kept me at the edge of my seat.

Readers who feel invested in the romance between Mercy and Adam won’t be disappointed. Their mating bond is explored in this book, and although there’s a little bit of Oh, that’s convenient!, the way their bond manifests itself fits perfectly within the story plot. We also spend a brief amount of time in Adam’s point of view. The transition was so seamless that I didn’t notice the switch until Briggs went back to Mercy’s first person narration.

These books are by no means explicit—in fact, Briggs tends to close the bedroom door—but Briggs has a wonderful ability to write Adam and Mercy’s scenes with such intensity and emotion that it feels, to me, unbelievably romantic even when they’re apart. What each of them does for the other, and the absolute respect with which they treat the other’s right to make their own decisions embodies what I love in romance fiction.

That said, I have some growing niggles with the series. I’m still dissatisfied with Samuel’s story arc, and I hope Briggs will address this in a future book. I’ve also become a little impatient with Stefan and Marsilia’s story arcs, and I suspect that the vampire conflicts will have to come to some sort of climax in the next book. And finally, I feel that the human players are seriously underpowered and that their motivations aren’t drawn out as well as they have been for the vampires, werewolves and fae.

In any case, this particular story ends beautifully (which, I should point out, is not a guarantee that everyone survives). There’s a subplot that runs through to the end which brought tears to my eyes—Briggs ends it on such a gentle yet devastating note.

Mercy Thompson fans who have been eagerly anticipating this book will love the complicated twists of the plot. Those looking for a dramatic development after Fair Game might be disappointed, but it seems clear that Briggs is leading up to something big—just not in this particular book. Romance readers will absolutely adore Adam in this book, and anyone keeping track of my vomit list will be gratified to know that there’s a scene in which Mercy upchucks a gutful of silver. What a fantastic read.

Who might enjoy it: Mercy Thompson fans who are all about the hero

Who might not enjoy it: Readers who haven’t caught up to the series yet—it would be very difficult to read this as a standalone

An advance reading copy of this book was generously provided by Hachette Australia. I was lucky enough to be able to feature Patricia Briggs in this month’s Romance Buzz—click on the link to read her answers to Booktopia’s Nine Naughty Questions! Note that the newsletter shows the US hardback edition of the book, but if you’re an Australian reader, it’s much cheaper to buy the local paperback edition here.