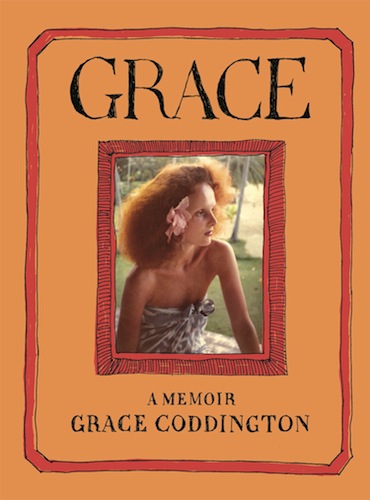 You don’t have to be a fashionista to appreciate this book. Grace Coddington is a woman who loves life and what’s she’s made of it, and that comes through very clearly on the pages.

I first started reading Vogue when I was a bright-eyed, bushy-tailed ten-year-old in love with River Phoenix. (I have now dated myself.) My mother worked for a marketing distributor, and aside from being sent to Paris for work on occasion, she had to read Vogue, Elle and other fashion magazines on a regular basis to keep up with the trends and check out the ads. Naturally, I read them too, and while I am the most tomboy-dressing person I know and will spend my days in thongs (flip flops) if I can, I have a slight fashionista side, more related to knowing about stuff than actually wearing anything. I know my designers, the classics, and have a list of handbags I will someday own before I die, but I am not concerned enough to give up wearing my flip-flops everyday. (Kat can also tell you that my penchant for celebrity gossip possibly will indirectly contribute to my random fashion know-how.)

Grace Coddington first became (in)famous outside the fashion world in the movie The September Issue, a documentary on Vogue and its editor, Anna Wintour. Wintour, (in)famously known for the movie the The Devil Wears Prada, was portrayed as Coddington’s adversary throughout much of the movie. As the creative director of Vogue, Coddington is responsible for the fashion shoots and styling for many of the pages in the magazine. In the movie, she and Wintour butt heads as to what should go in to ‘The September Issue’, Vogue’s biggest and most important issue every year. In real life, they are dear friends, but in the movie, it really looked like they would kill each other. At least part of the reason this memoir came to be may be because of her popularity after The September Issue.

Coddington has been in the fashion industry for 50 years. Her memoir is full of insights into the industry, and into relationships and life as a whole. The book comes to life with her words, imagination, and the charming little drawings that she has made herself, peppered throughout the book.

She begins her story with growing up in Wales, and how she first broke into the modelling industry in the late 50s to early 60s. Some parts of her life reminded me of a Mills and Boon novel, as it’s filled with charming anecdotes like this one, on the first guy she really dated, who took her on a holiday:

When we arrived, he cooked a beautiful candlelit dinner for two, after which I was shown up to what I thought was the guest bedroom. I undressed, put on my nightie, pulled down the top sheet, and there, neatly laid out on the pillow like one of those little chocolate mints you find in boutique hotels nowadays, was a condom. ‘What is this?’ I wondered. I really hadn’t a clue. Moments later, to my surprise, I was joined by [him] carrying a steaming cup of cocoa and looking adorable in his stripy cotton pyjamas. But his air was not that of someone about to read me a bedtime story…

Coddington starts working in British Vogue in the late sixties, and after a short stint with Calvin Klein, she joins American Vogue, about the time when Anna Wintour started as editor in the 80s. She talks about the era of the supermodels, their first shoots in Russia and China, shooting in exotic locations, lugging around your own stuff, and working with famous designers, make-up artists and hairstylists. Along the way, she gets married twice, has a series of adorable cats, and has more than a few love affairs before settling down with her partner of 30 years, the hairstylist Didier Malige, and their two cats, Bart and Pumpkin.

The book provides insight into the fashion industry, and while it is littered with famous names, it’s more than just a gossipy chat-fest. Coddington’s authentic and thoughtful voice guides the reader through the world of fashion beyond the pages of a glossy magazine. Her colourful and very interesting life also reflects the history of the era she’s recounting, providing a bright picture of what life was like and what people cared about. I loved hearing about the past, and how everyone dressed up and who was who, and who made an impact, how they evolved and what mattered the most.

People often think the fashion industry is frivolous, run by a bunch of crazy women and not worth much. In truth, it’s a billion-dollar industry that sets trends, creates jobs and, well, makes people happy. (Does this not sound like the romance industry to you? Granted, there is an added bonus of materialism in the fashion industry, but I digress. If an interest in fashion is good enough for the Black Dagger Brotherhood, then hell, it’s good enough for me.)

You don’t have to be a fashionista to appreciate this book. Yes, there’s a lot of discussion on Vogue, designers, models, and the occasional celebrity. (Did you know Anna Wintour had a crush on Roger Federer? This explains why he went to a lot of fashion shows with her!) There’s also a thoughtful, well-written story on a very interesting life that I’m certain most of us would appreciate. Grace Coddington loves life and what she’s made of it, and that comes through very clearly on the pages.

Who might not enjoy it: People who think fashion is frivolous