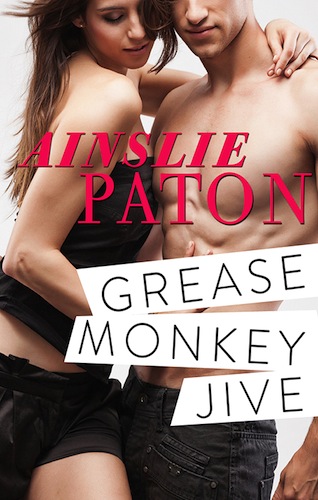 I can't say enough good things about this book. I hope it gets a print run one day so I can mark my favourite parts with sticky flags and display it on my bookcase with pride. Ainslie Paton is now definitely on my auto-buy list. Most of the books I read nowadays are romance, so it’s not often that I find a one that makes me feel like I’m reading something new in the genre. Until a book like Grease Monkey Jive reminds me that, yes, this genre is more than capable of surprising me in all the right ways.

Grease Monkey Jive opens with ballroom dancing instructor and performer Alex Gibson having a bit of a moment with dance partner Dan Maddox, and as I read the first chapter, I settled down for a lovely, comfortable read. Little did I know.

It turns out that this is only a teaser, and the story flashes back to introduce the characters and the plot. We see Dan and his mates—Mitch, Fluke and Ant—going through a typical Friday night, drinking at a club and picking up chicks. Dan is the babe magnet who leaves with the most beautiful woman but is hard-pressed to remember her name the morning after. It’s an aimless existence, and he begins to question if there’s more to life than picking up random girls, surfing with his best mates and working at McMurty’s garage—particularly when he finds himself in strife after making out with Fluke’s younger sister.

Meanwhile, Alex decides to enter the Australasian Dance Theatre Championship, despite feeling resistance from her mother and her boyfriend, in part because she loves to dance but also because she could really do with the prize money. Due to what she perceives to be her mother’s issues relating to having been a single mum, Alex feels pressure to put away her dancing shoes to pursue a career in business and settle down with her stable and financially secure boyfriend.

It takes a while for Alex and Dan’s stories to converge and come back to where it began in the book, but it’s a fabulous journey—more so Dan’s than Alex’s, to be honest. Although the supporting characters around Alex sometimes surprised me, Alex herself rarely did; her issues are familiar in the world of romance. In contrast, Australian author Ainslie Paton displays an affinity for Dan’s voice and Dan’s world that had me completely wrapped up in his story.

To cut a long story short—and it is a long story—a bet between mates sees Dan and two of his friends signing up for beginner dance classes at Alex’s studio. A short time later, Alex’s dance partner and best friend Scott injures himself in the middle of the competition. A loophole in the rules means they can field an alternate partner until the final round. Faced with a lack of other options, Alex’s coach convinces Dan to help them out. Alex and Dan feel a connection with each other, but they both have reasons for not wanting to act on it—Alex is in a relationship, and Dan wants to break the cycle of casual encounters that has become a habit for him.

This book isn’t for readers who have rigid views on how romance novels should be written. If you have hang-ups about point of view, structure, timelines and all the other elements that make romance novels comfortable, you’ll need to let go of them before starting this book. Paton keeps enough romance conventions to make the story familiar—the unbelievable physical chemistry between Alex and Dan, the plot manipulation—but she never lets you get too comfortable. Few of the characters in the story are easily pigeonholed.

Dan is rough and gritty and mostly unapologetic about it—he drinks, he sleeps around, he’s in for a bit of a biffo, he does drugs—as are his circle of friends. He’s basically a modern-day rake, but unlike most romances where the heroine is the catalyst for the reforming the hero, for the most part Dan manages this process on his own. Alex is instrumental in the process, as are his mates and even his odious father, but Dan’s journey to self-awareness is largely internal and at times solitary. Alex’s character arc complements Dan’s, but it’s nowhere near as intense or as compelling.

What Puberty Blues did to make surfers vastly unappealing, Grease Monkey Jive has managed to undo for me. It’s not that Paton sugarcoats Dan and his mates, but that she balances out their strengths and weaknesses. It’s not difficult to see why they’ve stuck with each other for so long—nor to understand where the tensions in their relationships lie. I particularly love the way they rile each other up in typical Aussie male fashion. For example, after seeing Dan perform a routine during practice, this is their feedback:

…Dan joined the boys and Trevor on the bench seat. He said, ‘Well?’

‘Less stupid than when you started,’ said Mitch.

And in a later scene:

They’d reached the same conclusion. Dan had done it with Alex. They just didn’t agree on what he’d done.

‘I’m not so sure. I think she might be the “friend”,’ Mitch made finger quotation marks in the air.

Fluke made a single finger gesture.

I’ll be the first to admit that I have a soft spot for dickhead boys who turn out all right (see here and here), so I’m kind of the perfect reader for this story. I was particularly touched by the way they stick by Dan at his lowest point, and everything about it—from the way they confront him about his drug use to the way they organise to have someone on suicide watch without being in his face about it—rings true to me and had me reaching for the tissues.

I think Paton’s narrative style is unique in the genre—I haven’t read a romance book like this before. It’s a double-edged sword. The slow build up will frustrate readers expecting a romance novel as you’d typically find in the genre. But the story as a whole moves rather beautifully, and in particular the way Dan’s story unfolds. At first, I thought it should’ve started later—after Dan has decided to change his footloose ways—but the story would have lost some of its depth and uniqueness if it had been written that way.

The sex scenes in this book aren’t graphic. If not for the situations in which the characters find themselves, these scenes are almost old-fashioned in their ability to avoid sex words. But they’re freaking hot. Who knew back alley sex could be so sexy and sordid and angsty and lovely all at the same time! Paton has a flair for writing these scenes with a certain lyricism that made me ache.

‘Why are you asking me all this?’

He didn’t move, but his hand was hot on her thigh, his fingers splayed, tentacles of heat tenderising her whole body. ‘I want to understand what you want in life.’

She didn’t know how he could be so still and so frustrating. When she said, ‘Why?’, she wanted an answer to both questions.

Now he moved. One hand up and over hip, a hot trail that made her writhe, the other tearing the sheet away. He levered himself over her, knees either side of hers, hands either side of her shoulders. ‘Because you’re in my life and what’s important to you should matter to me.’

Alex said, ‘Oh.’ Her heart was hammering hard in her chest. She was awed by the simplicity of what he’d said and how it made her feel—vital. Loved. She stroked his chest. ‘What do you dream about?

‘Staying lucky, big waves, fast cars, faster women.’ He lowered himself so they were nose to nose. ‘You.’

Lest you think I’m being effusive, I had some minor issues with this book. In a few places, the pacing gets a little too slow and there are a few instances where I felt the writing became overly sentimental. There are also a number of proofreading errors in the text—all the Escape launch books have them, but Grease Monkey Jive is a long book, so the errors add up. Then again, I was so engrossed in the story that they didn’t bother me too much.

Paton sometimes head hops between Dan and his mates. They all have distinct personalities and philosophies, so it’s not difficult to keep up, but the transitions aren’t always smooth.

A more significant issue is that I couldn’t always manage the suspension of belief required to accept that Dan was able to scrape through competition dancing without any previous experience, even with his natural ability. The man is the backbone of the dance—it’s difficult for an inexperienced and untrained dancer to pull off a decent routine, let alone enough to survive championship heats. There’s a scene where Dan changes their routine on the fly, and I know it’s meant to be oh, so romantic, but I have a hard time imagining impromptu moves working during competition—Paton takes quite a bit of artistic licence, though I concede that it makes for a turbulent and sexy scene.

And finally, I would be remiss not to mention a flashback involving a cat dying in a gruesome, though not particularly graphic way. I know this can be a dealbreaker for some readers. And as that scene also involves a character reacting to this event by throwing up, this book is officially a vomit book. :-)

I can’t say enough good things about this book. I hope it gets a print run one day so I can mark my favourite parts with sticky flags and display the book in my bookcase with pride. Ainslie Paton is now definitely on my auto-buy list.

Who might enjoy it: Readers who love a flawed hero

Who might not enjoy it: Readers who expect Aussie romance heroes to be Hugh Jackman clones