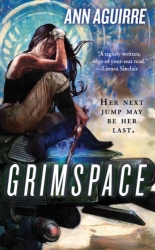 I’m late for my re-read challenge review, but I’m blaming Ann Aguirre. I’ve re-read Grimspace at least three times before, and each time, I’m compelled to read every word to savour the story of Jax and March.

Sirantha Jax is the sole survivor of a terrible spaceship crash that killed not only a prominent dignitary but also Jax’s lover. Jax isn’t sure what happened, and she’s starting to believe that maybe it was her fault. In any case, it looks like she’s going to be the scapegoat. So when a stranger offers to spring her out of the pyschiatric facility she’s being kept in, Jax has nothing to lose.

But to get out, the rescue ship needs a navigator and Jax is the only one on board. Jax’s genetic makeup allows her to navigate through grimspace, a kind of dimension that allows people to bend space so they can travel great distances. Jax has the ability to sense the beacons in grimspace—landmarks or doorways that mark where in grimspace you are. But to do that, Jax has to be plugged into the ship with the pilot. It’s an intimate relationship, one that allows jumper and pilot to be in each other’s minds … and it’s too soon for Jax. Because the lover she lost had been her pilot, and jumping with someone else feels like a betrayal.

What’s more, the ship’s pilot turns out to be March, the stranger who got her out of the Pysch facility. He’s not easy to read and he challenges Jax at every turn. But even though Jax almost hates him for their forced intimacy, she’s also drawn to him—his strength, his unexpected gentleness, his secrets, and the unexpected vulnerability that she glimpses when they’re jacked in and travelling through grimspace.

March and his crew want to start a colony of jumpers and break the Corp’s monopoly on space travel. Jumpers have the J-gene, which allows them to navigate grimspace, but which make them vulnerable to burning out and dying early. The plan is to genetically engineer a new species with the human J-gene compensated for by alien DNA that can withstand grimspace for much longer periods.

But nothing goes according to plan. Jax is a prized commodity—not only because she’s a jumper but because she’s now a fugitive with a bounty on her head. And with every jump, she feels closer and closer to her limit, that day when her mind will wander too far into grimspace and never come back.

Science fiction or romance? (And comparisons with Firefly)

Grimspace is written in first person, from Jax’s point of view. It’s an unusal choice for a romance, and to be honest, I don’t even think this book is marketed as romance. At my local bookstore, it’s shelved with the general sf/f section, not the paranormal romance wall. But don’t let this put you off. The romance is gradual, it’s probably slower than you’d expect in a typical romance, but it’s there and it’s just lovely. The fact that we can only see the story through Jax’s eyes isn’t a hindrance because she has such a strong narrative voice.

The world that Aguirre builds reminds me a lot of Joss Whedon’s Firefly. The crew is a mishmash of personalities that Aguirre puts to good use. Each crew member has a background and a character that remain distinct and consistent throughout the story. Some of the alien species also remind me of Firefly/Serenity, although I’m sure I’ve read somewhere that Aguirre hadn’t even seen the show/movie when she wrote the book. I suppose the commonalities are probably shared by a lot of sf/f stories, but Firefly stood out the most for me, probably because of Dina, the female mechanic (and Kaylee from Firefly), and the way some of the predatory alien species are described.

But perhaps the greatest similarity is that Grimspace has some vivid, well-rendered, sexualy active female characters. They’re tough but not invincible, and I think Aguirre portrays them honestly. Even Jax, who was considered a celebrity before the crash, admits that she’s not the brightest star in the Galaxy, and that’s just fine with her. She’s more beauty than brawn or brains, but she’s foremost a survivor, and as the story progresses, we see her making choices that aren’t always the most noble but that are consistent with her instinct for survival. Aguirre pits this fundamental need with Jax’s feelings for March, and the results are not always pretty but they do hike up the emotional tension. Jax’s decisions aren’t always easy to forgive, but she’s her own worst critic, so it’s also not difficult to understand where she’s coming from.

I love this pair. I’ve read some reviews that consider the romance between Jax and March to be one of the weaker parts of the novel, but I completely disagree.

If you’re looking for a logical romance, you won’t find it between these two. What I love most about their relationship is that it starts off rather … pheromonally. You know that feeling when you’re drawn to someone for no real reason? When you find someone and you’re not even sure you like them and yet you feel like there’s something that connects you? Well, Jax and March are like that.

The great thing is that Jax doesn’t just change completely and start chasing after March. She fights the connection, at first chalking it up to the intimacy of being navigator and pilot.

And that, you see, is why so many pilots and jumpers wind up sleeping together. It’s too much on the senses—that mutual stimulation needs an outlet, and there comes a point when nobody else will do. You want to share your body the way you’ve shared your mind, so many times, and the sex is better, stronger, and more intense…

Anything else is just too vanilla.

Like he knows what I’m thinking, March flicks me a scathing look…

And even when she accepts that she’s genuinely attracted to March, she doesn’t read too much into it—in fact, she considers sleeping with someone else. This could’ve come across sounding sleazy, but Aguirre leads up to the moment and because we’re so close to Jax’s point of view, her decision makes sense.

“Are you nuts, Jax? Don’t mess with someone like Hon.”

Ha, I certainly never imagined he’d care about my virtue. I wave a hand dismissively. “Don’t worry, I’m not stringing him along. It won’t be a hardship to keep him warm while we’re here.”

He just gapes at me, like it’s impossible for him to imagine someone sleeping with me. I know I don’t look as good as I did before the crash, but I’m a rocket in bed. Maybe Hon knows that, so he’s not put off by the scars.

“About what?” I asked, incredulous.

“Sleeping with Hon.” His tone suggests I’d be whoring myself out.

“Why?” I start ticking off reasons to do so on my fingers. “He’s gorgeous, he smells good, it’s been a long time since I had sex, and he might kill us if we piss him off.” Yeah, the last reason does sound like pandering, but still, if I want to, and it keeps Hon happy, what’s the big deal? “Give me one good reason why I shouldn’t.”

March is harder to understand because we never get into his head, although Aguirre adds a little twist to get around this problem. She doesn’t abuse it, though, so March is still a more distant hero than I think many romance readers would be used to. I don’t think it’s a big problem—I love me a good inscrutable hero! (And frankly, I’ve read a heap of romances where the hero thinks like a woman, so it’s a nice change not to have to worry about that.) There are times when I think he’s a little too chatty, but these are few and far between.

There are very few things I can complain about. The ending is probably the biggest nitpick. It seems a little rushed and everything is somehow tied up nicely. It left me wondering if the book was originally written as a series, then contracted as a single title (and then later into a series again). I think if Aguirre had woven in the subplot around Jax’s crash a bit more smoothly into the story this wouldn’t have been such a problem. Also, I think a few more glimpses of March’s potential to lose control and resort to violence would’ve helped.

On a technical note, for the most part I love Aguirre’s economy of words. It forces her to be very precise about what Jax is saying and to come up with some creative and beautiful metaphors. But at times I felt the loss of prepositions. (And note, this is something I’ve noticed more in other novels, not just this one.) For example, “I can’t argue that” is different from “I can’t argue with that”. In fact, the statements are opposites. So when the “with” is taken away, even though I know what the author means, it’s not what’s actually written. The other nitpick I have is that certain words are used that I feel either don’t convey enough meaning or don’t sound natural enough, I suppose. Again, this is something I’ve noticed in other novels, and it’s certainly less noticable with Grimspace. But it does bother me.

This series is an auto-buy for me. I love Jax’s voice and I love March. The world building isn’t shabby, and the external plots, while not always surprising are well paced and backed by solid writing. Grimspace is a keeper for me, as I suspect the rest of the books in the series will be. Click here for an excerpt.

The next book in the series, Wanderlust, is out now, and Doubleblind is due for release in September. In the meantime, Ann Aguirre is writing an urban fantasy series. The first book, Blue Diablo, will be out next week. Check back here on Monday for my review.