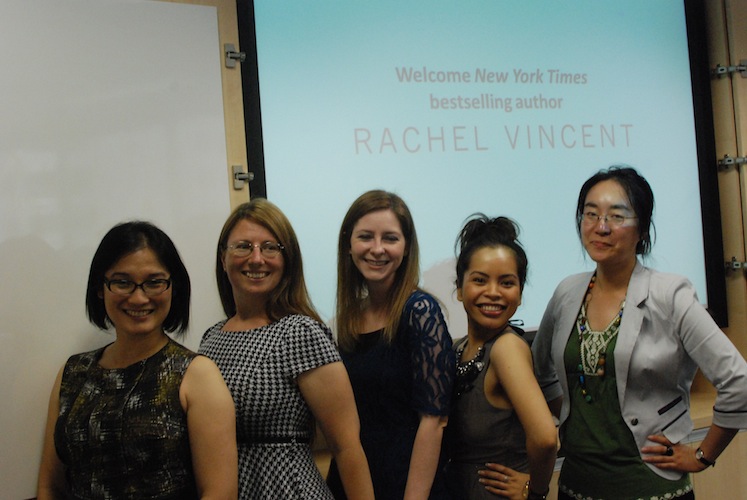 Yesterday, Book Thingo bloggers were fortunate enough to be invited to Harlequin’s first blogger summit. Decadence, Envyious, Jen and I (we missed you, Wandergurl!) attended the event, which was held at Harlequin HQ at Chatswood. It was a surprisingly intimate event, with opportunities to meet the team at Harlequin, as well as guest author Rachel Vincent, who stopped by Sydney on her way to Brisbane for the Australian Romance Readers Conference (ARRC).

I haven’t heard of any other publishers who have done anything similar to the Harlequin Summit, so it was quite interesting to be part of this event. I was also surprised at the large turnout, with a number of people—Envyious and Jen included—traveling interstate for the occasion.

I made some notes, but most of the presentations centred around Harlequin’s pipeline and teasers about the books, so I’m just going to list those, and you can check out the blurbs for yourselves. Afterwards, Rachel Vincent gave a talk (highlights below) and then was generous enough to sign our books.

Harlequin Australia launched a community page, which brings together tidbits from their Twitter stream, Goodreads reviews of their books, videos from their YouTube channel, photos from Instagram, book extracts, and memes and games related to books. Every month they’ll feature a book blog, and I’m chuffed to say that Book Thingo is the featured blog for this month. :-)

Saving Grace by Fiona McCallum (April) — In 2012, MacCallum was Harlequin Australia’s best selling author, and her book, Wattle Creek, was included in the Get Reading! guide
The Returned by Jason Mott (September) — A high concept novel piloted for TV by Plan B, Bratt Pitt’s production company; the book trailer for this one was really good
Outback Dreams by Rachael Johns (October) — You can read my review of Johns’s first novel here (which is blurbed on the cover of her second novel :D)

Harlequin Australia will also be releasing books under the Spice line. I love the tagline: ’50 shades hotter than grey’. Titles for this line include:

Deeper by Megan Hart — I believe titles from Hart’s backlist will get a local print release (the covers are black with a picture of a flower)
The Mistress by Tiffany Reisz (August) — I haven’t read this series (Envyious is our Reisz reviewer—her review of the first book is here), but every time it comes up in conversation everyone tells me to read it

A slide of titles from Escape was shown, but there were too many books for me to type. You can check out their current releases here.

A Wicked Kiss by Michelle Rowen (March)
The Goddess Inheritance by Aimee Carter (March)
With All My Soul by Rachel Vincent (April) — Final book of the Soul Screamers series
The Eternity Cure by Julie Kagawa (May)
Dare You To by Katie McGarry (June) — Beth and Ryan’s story
Ink by Amanda Sun (July) — Story set in Japan by a debut paranormal author
Confessions of an Almost-Girlfriend by Louise Rozett (July)
Banished by Nicola Marsh (August) — Some of you may be familiar with Marsh, as she also write adult romance fiction
Enmity by Evelyn Andrews (September) — Dystopian story by a 20-year old Australian author

Rachel Vincent spoke at length about her books, and it was very interesting to listen to how she writes books, because I found her very different to many other genre authors I’ve heard. To me, her approach to writing is a much more traditional? classical? literary?—I’m not sure how to describe it—approach, with an emphasis on her development as a writer rather than a pre-occupation with the worlds she creates. I mean, she still came across as an author who is deeply attached to her characters, but not obsessed with them. (This, I think is the reason she is able to end her series. More authors should take this approach!)

Speaking of series endings, With All My Soul is the final book in Vincent’s Soul Screamers series (which I love). Each of the books maps to one of the deadly sins. She said she can’t promise a happy ever after for this one, but she promised ‘a happy every after for everyone who survives.’ I mean, how mean is that??? Luckily, there was an advance reading copy of the book in our swag bag, and before you ask—yes, I’ve killed a fairy!

Vincent said she can’t reveal her new projects just yet, but that she’s writing a new book in an adult genre she’s done before, as well as a new book in a new-to-her genre.

Oath Bound, the last of the Unbound trilogy, comes out later this year. Of the series, Vincent said, ‘You could not pay me to write another one of those.’ She said it was the most stylistically challenging series for her because it’s not in her comfort zone—third person, changing points of view—and the rules of the world leave little room for her to negotiate the characters through. Probably for these same reasons, Vincent said she feels that Shadow Bound is one of the best books she’s done.

Of the Shifters series, Vincent admitted, ‘I totally play Sims with their characters.’ She seemed very reluctant to revisit the world, although she said if she ever did do a kind of epilogue it would probably feature Jace.

Vincent finds young adult stories easier to write. There was some discussion around the explicitness of YA novels (or lack thereof). Vincent talked about finding explicit fanfic for some of her characters, which was a little disturbing as she had deliberately closed the doors on those scenes. She also discovered that some of the readers and writers of fanfic were teenagers. Her view was that if anyone is closing doors and censoring teen/young adult books, it’s the adults and not the kids, because the kids know what authors are not saying.

Other tidbits and impressions

We learned some additional anecdotes about Rachel Vincent, but I won’t mention them here because I suspect Decadence might want to incorporate some of them into the panel she’s moderating at ARRC. After the official presentation, everyone mingled, put faces to blog names and Twitter handles, and chatted with the Harlequin team. It was very informal, very happy and really quite exciting, I think, for the bloggers. We’re such a small community in Australia that it’s always a buzz—and somewhat of a surprise—to meet other bloggers.

My impression is that Harlequin is super busy ramping up local releases, particularly big-name authors or big-buzz titles from overseas. I suspect this is to encourage readers to buy the local editions rather than heading off to overseas bookshops. If they can keep prices close to the international counterparts, I think this will be good for readers. According to Harlequin, in Australia they publish over 100 titles per month, not including their ebook titles. Is this a huge number? It seems huge to me!

From the very informal poll I took of the people I met at the Summit, romance bloggers are still very much in the minority. I suspect most bloggers, like Nikk from Realm of the Sapphired Dragon, specialised in teen/young adult fiction, although there were also more generalist bloggers in attendance, including Bree from 1 girl…2 many books, Shelleyrae from Book’d Out, and Steph from Read in a Single Sitting.

Our thanks to Harlequin Australia for being such gracious hosts. I believe there might be a video of the entire thing, although I’m not sure what will be made available to the public. I was told that Rachel Vincent will also be recording an interview, so you might see her on Harlequin TV soon.