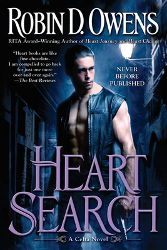 A good addition to the series for Celta fans who are curious to see how characters have evolved and want to catch up on previous characters’ lives.

I first read Robin D. Owens’ HeartMate earlier in the year. Within the next month I managed to collect every single book in the Celta series by visiting random bookshops in the Philippines and through some creative used book buying via @GirrlitsBooks. Needless to say, I love everything about this series—even the apostrophes.

Laev T’Hawthorn was stupid a few books ago and, as a twenty-year old, married the wrong girl, thinking she was his HeartMate. She fucked him over, to put it in simple terms, and later died when a devastating illness swept the land. Laev, now head of his family after the death of his grandfather, has since discovered that she stole family heirlooms and sold them. He is determined to get them back, and in doing so right some of the wrongs he felt he has brought upon his family by choosing the wrong woman.

Camilla Darjeeling runs a tea house (in case you couldn’t get this from her name) and is a very independent woman who has worked very hard to get herself a better station in life. She also knows Laev is her HeartMate. (She can’t tell him—this is a law of the land, just so you know that she’s not just being unnecessarily stubborn.) She’s being bothered by her unscrupulous father and uncle, who keep stealing everything she owns and physically abusing her despite her best attempts to avoid them.

Camilla refuses to acknowledge Laev is her HeartMate, and he refuses to try and find her because of his past experiences and regret. Eventually, their sexy-time dreams catch up with them and they finally hook up in real life, but neither them wants to go further than that.

Laev and Camilla’s relationship came across at times like a friends-with-benefits tale that evolved and and turned out well. Their hesitation to move towards romance, despite the fact that it was inevitable, was realistic and well-portrayed. People do have regrets, and this does stop them from moving forward or trying to love again, because they’ve been burned before. Camilla’s lack of trust for men, brought about by abuse from the men in her family, was also realistic. If you take away all the juju and magic porting and mind-talking cute animals, they really could just be two people having issues with commitment.

You can’t read this book without reading the rest of the series. The Celta series has a very finely ingrained mythology, which you won’t entirely understand if you start with Heart Search, which is set ten years into the future from the last book and focuses on a younger generation. You don’t have to read all the preceding books, and you don’t even have to read them in order—I didn’t—but you need another book to start with before you get to Heart Search. It’s so far along in the series that it’s best to read one or two of the previous books in the series (any of them, really) beforehand.

A good addition to the series for Celta fans who are curious to see how characters have evolved and want to catch up on previous characters’ lives.