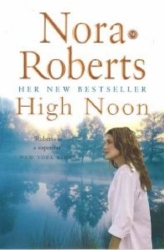 It’s clear why Nora Roberts is beloved by so many romance readers. Her voice is gentle but not wussy, and her characters are interesting but real. While I have some stylistic issues with this novel, they weren’t enough to distract me from a well-crafted storyline and believable, lovable characters.

I bought this book on the strength of Rosie’s post here. What struck me most about the story is that even though the characters’ circumstances are sometimes unusual—Phoebe’s mother has agoraphobia, Duncan won a bazillion dollars in a lottery—they still felt very real to me. Roberts does an excellent job of keeping the characters consistent, and I never felt that any one of them, including the secondary characters, acted out of character throughout the novel. The suspense plot isn’t shoddy, either, although it sags a little in the middle. Roberts gives enough information for me to understand what’s happening and to create the right atmosphere. It *felt* right, which is all that matters to me since I know nothing about law enforcement.

I do have an issue with some of Roberts’s POV choice because not all of the transitions in the narrative are smooth. Readers who hate head hopping will probably find this a problem.

Nevertheless, the romance is charming, with enough humour to keep it from being sappy but not too much that it becomes absurd. It helps that I loved Duncan, the hero, particularly the way he courts Phoebe’s entire family and the way he supports Phoebe without being overbearing. Boring as it may sound, I find that stuff so very sexy!

High Noon is a lovely, comfortable read, and it’s a book I can easily recommend to family and friends. As a reader, I find Roberts’s voice engaging and, more importantly, trustworthy. Which may be an odd thing to say about an author’s voice, but it means I can read the story without fear that either the characters or the plot will run amok just as I’ve invested my time and emotions into the story. Read an excerpt here (PDF).