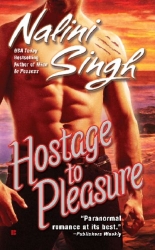 Once I get past, say, the third book in a series, I tend to approach subsequent books with trepidation. Because there’s always the fear that maybe this will be the beginning of the end, the one that signals that the series is about to jump the shark. Thankfully, Hostage to Pleasure, the fifth book in Nalini Singh’s Psy/Changeling series, doesn’t disappoint.

Ashaya and Dorian: then and now

Ashaya Aleine is a genetic scientist coerced by the Psy Council to lead a top-secret project to create an implant that will turn the Psy population into a hive mind. Her story started in the previous book, Mine to Possess, although you don’t need to have known any of her backstory to start this book. Dorian Christensen is a sniper from the DarkRiver changeling pack, who, unlike the other changelings in his pack, can’t shift–he’s a leopard, but for some reason he can’t turn into his animal form. His sister was murdered by a serial killer whose psychosis was kept secret by the Psy Council.

But Dorian’s pack owes Ashaya a favour, which has him rescuing Ashaya’s son, Keenan, who, for all intents and purposes, has been held hostage by the Council to force Ashaya to continue her research. When Ashaya makes a well-planned but risky-as-hell escape from her lab, she, too, ends up under Dorian’s protection. And although he can’t even be rational about the Psy most of the time–because of what happened to his sister–he feels a connection to Ashaya, and that bother him a lot. In more ways than one. Especially since Ashaya seems determined to cling to Silence, which played a large part in what happened to his sister. She also refuses to be reunited with her son, which is incomprehensible to changelings, who value their young above all else. Meanwhile, Ashaya is scrambling to figure out a way to stay alive and out of the Council’s radar, embarking on some risky strategies to try and stay one step ahead of the Council’s assassins.

What makes Hostage to Pleasure different to the previous novels

The romance pairing between Psy (heroine) and changeling (hero) isn’t new, but Singh creates a dynamic very different to that in Slave to Sensation and Visions of Heat. For one, Ashaya isn’t bound by Silence. Instead, she uses Silence in a different way, and in that sense she needs the protection of Silence. But it’s not the same way that Judd (featured in Caressed by Ice) needs it, either. Ashaya’s Silence protects her from being exposed as flawed to the PsyNet–in effect, it allows her to hide the fact that the Silence Protocol never actually worked for her. It also protects her from … other potentially harmful stuff that, paradoxically, is that same thing that she’s fighting to stay connected to. It’s hard to talk about this without giving anything away, although the basic conflict becomes obvious early in the story.

The timing of this book is brilliant because just as I was beginning to feel complacent that I had a good grasp of the Psy/Changeling world, Singh blows my preconceived notions and assumptions away. I love the new shades of grey introduced in this book. I love that Dorian is forced to rethink his absolute hatred of Silence without diminishing the anger that he feels over his sister’s brutal death. I love that Ashaya’s internal conflicts are all basically motivated by love, including the kind of love that becomes destructive.

The evolution of Silence and the network of minds

Hostage to Pleasure develops the ideas introduced at the end of Visions of Heat. Singh explores the duality of the network of minds, and gives us a glimpse of how it can work to contain violence. I thought Judd’s book had given as much insight as we needed to understand Silence, but Singh evolves the idea further, showing different aspects of Silence, new consequences, demonstrating how Psy can function in the PsyNet even though they haven’t taken to Silence or have broken past it. Singh explores these complexities through Ashaya’s familial relationships, which echo Pack bonds in changeling society. This sets up her emotional conflicts with Dorian, whose own issues are largely based around his feelings of guilt that he was unable to save his sister.

We also see the challenges faced by a latent changeling–that is, one who can’t shift to animal form. Singh gives a sense of what Dorian’s leopard is thinking and feeling, even though it all happens internally, and we start to understand what an effort it is for him to contain his animal instincts when there’s no external outlet for the animal to expend its energy. I never felt that Dorian was anything but a fully fledged changeling, and yet I also felt his underlying frustration of not being able to shift and the fear that his animal instinct might one day fully take over even his human side.

I have to say, though, that this aspect of the book was a bit iffy for me. There are times in the book when Dorian’s anger is translated as sexual aggression, and I found those scenes uncomfortable. Singh writes Ashaya fighting back, but I didn’t feel as though she had enough power to really mount much of a fight–that in most of these scenes Dorian humours her, rather than backing off out of respect for her ability to challenge him or his assumptions. (There’s one notable exception, however, when Ashaya tells Dorian exactly why they’re in an untenable situation–what it will do to him to confront his adversary the way he expects it to play out. I found that scene very powerful.)

This is my second favourite book in the series so far. I felt like I understood the main characters and what motivates them, and that Singh strikes a comfortable balance between the romance and the series plot. It’s going to be interesting how Singh manages the secondary characters from this point on, since the plot has widened considerably and the political setting for the series has become complicated. The last couple of chapters were a little too pat for me, but I kind of expected them and they did make me feel very happy. :-)