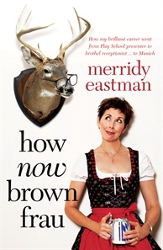 If you like funny, heartfelt memoirs, this one is for you. Meredith Eastman seems to have lived out her dream—successful career, great guy and a lovely family—and it’s always lovely to see that come true for someone.

At 41, Merridy Eastman had accepted that she would be single (and happy) for the rest of her life. Then she meets a lovely German while visiting Europe. A year later—also preggers—she moves to Bavaria to be with him and start a new life together. This is the story of her adventure.

I have to admit this book caught my eye based on the title alone. In real life I say ‘How now brown cow?’ to people instead of ‘What’s up?’ sometimes, a legacy of my school days when they had Hershey’s Brown Cow commercials. I read the back blurb and the first chapter and, always a sucker for funny travel memoirs, I got it.

Eastman, a former Play School presenter, writes a comedic, sometimes bittersweet tale of what it’s like to uproot yourself to a new country, learn a new language and fall in love with the country and its people, even if you can’t understand what they’re saying.

Her fiancé’s family speaks limited English, and she is especially touched by her mother-in-law’s efforts to speak to her with the help of her little dictionary. At first, she is intimidated by how everyone is always dressed well—I think Germans don’t wear pants as tights, ever—and I cheered along with her hilarious efforts to learn German with her multinational classmates.

Along the way we meet her sometimes eccentric, close-knit family, who all live a bazillion miles away in London and Hobart. This is especially bittersweet for Eastman who can see the closeness between her husband’s family and wishes she were closer to her ageing parents so she can help care for them the way her husband cares for his.

I learnt more about Bavaria, which while being part of Germany is a whole different kettle of fish altogether. Aside from Oktoberfest, lederhosen (which everyone is proud to wear when the occasion demands it) and Bayern Munich (Germany’s best football team, I promise) it has a rich history of castles, eccentrics and, of course, the war.

Germans are taught about the second world war and all that has happened and essentially taught not to be nationalistic. No one speaks of it, and even if they’re proud to be German, it’s not a demonstrative pride, the way you would be if let’s say you were American or Aussie. I learnt this from a German acquaintance, who also said having the World Cup in Germany helped them overcome that, so to speak. It was the first time everyone would proudly display their flags and they were overwhelmed with as sense of pride with their country. Eastman experiences this and shows us how far she’s come in her five years in Germany, and how proud she is of being German, at least when it comes to soccer. :)

This book made me really want to go to Bavaria. I’ve always wanted to go see castles, and possibly see a Bayern Munich game, but the rich descriptions of history and the surrounding areas have motivated me even more.

If you like funny, heartfelt memoirs, this one is for you. I cheered with Eastman through every adventure. She seems to have lived out her dream—successful career, great guy and a lovely family—and it’s always lovely to see that come true for someone.

Who might enjoy it: Romantics and German soccer fans

Who might not enjoy it: People who wear pants as tights

You can listen to an interview of the author on ABC Radio here.

Wandergurl reviews a travel book once a month as part of Travel Tuesday (#traveltuesday).