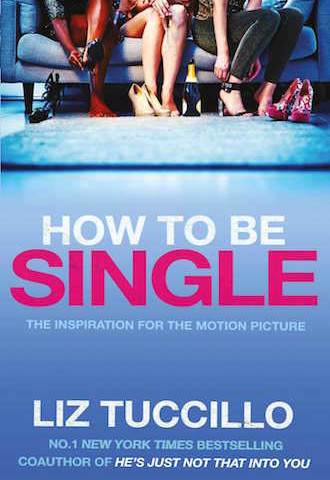 Review of: How To Be Single As a committed single girl I was pretty interested to read Liz Tuccillo’s How To Be Single and see what little gems of advice she had to help me up my game, so imagine my disappointment when it turns out Tuccillo has left her self-help column style behind and turned her hand to chick lit.

Rather than a set of clear and patronising rules that only thinly disguise the fact my ultimate life goal should actually be ending my single status, I got a novel that was overpopulated with caricatures rather than characters. But I persevered for a whole five chapters before I eventually had to give up.

I really hate to DNF books, but I’m not even sorry about it this time.

How To Be Single follows Julie, an anthropology graduate who finds herself working for a publishing company as the PR girl for some truly bizarre self-help books. She’s disillusioned with her job but not sure what else to do. And then her former work friend Georgia is dumped by her husband, and begs Julie to take her out and show her the ropes of the New York single scene.

After a disastrous night out, including being judged by some random French women in the ER, Julie starts to wonder if maybe other cultures have something to teach American (white, affluent, university educated, New York) women how to be single. So off she trudges to her boss to pitch the single girls’ self-help book. And of course her boss gives her the go-ahead, and sends her off into the Big Wide World.

To give How To Be Single some credit, the fact that Julie and her friends are 35+ years old is pretty rare in my experience. But that’s the only credit I’m giving it. Because it also covers some pretty dodgy ground regarding mental health, cultural appropriation, and racial stereotypes.

For example, Julie’s friend Ruby definitely has some kind of mental illness. Whether it’s bipolar, depression, or something else I wasn’t able to recognise, but the explanation we’re given is that she just doesn’t cope with being dumped. And ok, some people don’t. But this is a woman who completely falls apart, and spends weeks at a time unable to get out of bed following the disappointment of a failed relationship. That’s quite disturbing. Especially when it’s presented as some kind of quirky, funny character trait.

The tipping point for me, though, was when one of Julie’s other friends Serena (who I’m convinced is the same Serena from Gossip Girl), decides to become a Yogi, giving away all her worldly possessions, shaving her head, and committing to a lifetime of meditation. When her new friends, acquired through Julie, come to the ceremony we get the following observations:

As they followed the smattering of people walking down a grassy hill on a little stone path, they saw that they were clearly overdressed. The other guests were wearing flowing shirts and skirts, the men had various displays of facial hair and the women were mostly sporting unshaved legs. There were a few Indian men in orange robes and sandals…

An elderly Indian man in orange robes who seemed to be the head swarmi started reading from a book in Sanskrit. There were two other male swarmis flanking him, an older Italian-looking swarmi and a really hot fortysomething swarmi. Next to him was an extrememly overweight female swarmi. They stood silently as the head Indian swarmi kept reading.

I persevered for a little longer, with some skim reading but then I hit the Australian leg of Julie’s journey and came across this:

Some people can suffer through it; some people can overcome it and move on. Georgia was felled by it. Like an aborigine with a bottle of Wild Turkey, Georgia spiraled out of control.

Let’s put aside the fact the outdated and offensive term ‘aborigine’ was used in place of Aboriginal person, because okay, maybe that’s a little too nuanced to expect from How To Be Single at this point. But really? I’m expected to be okay with the fact that Aboriginal people and alcoholism are SO synonymous that it serves as a simile here? No. So now that it was clear it wasn’t going to get any better I had to stop. I just don’t have time to waste on something that at best is using surface level representations of non-white races and cultures, and at worst is outright perpetuating racism.

Considering the sheer triteness of the book, it’s not at all surprising the film ditches Julie and her faux-anthropological study in favour of her semi-interesting friend Alice (Dakota Johnson). It’s also not surprising that she’s aged-down significantly because Hollywood doesn’t believe in women over the age of 30 who aren’t Meryl Streep. Or witches.

I mean, don’t get me wrong, Alice’s (possibly movie-created) sister Meg (Leslie Mann) is over 30, but I’m not entirely convinced she wasn’t supposed to be a witch?

But yes, the film deviates drastically from the novel to the point of being unrecognisable. When we meet book-Alice she’s a former paralegal, current Full Time Single Girl. After realising that meeting The One is actually incredibly time consuming, she decides to quit her job and spend all her time going on dates, going to singles events, going to literally every party she’s invited to. It’s pretty extreme.

Meanwhile, film-Alice is just about to start her dream job as a paralegal and decides to leave her longterm boyfriend in order to experience single life, and Eat, Pray, Love her way into some form of self-discovery, I guess? But like, New York stylz? Which probably is the same as the regular kind but louder, and with bagels.*

* I have never been to New York or read Eat, Pray, Love so this is pure conjecture.

When she arrives at her new job, Alice meets Robin (Rebel Wilson), a party girl receptionist with an amazing wardrobe and abrasive personality. Johnson and WIlson are wonderful foils to each other, and their chemistry often saves How To Be Single from crossing into saccharine sweetness. And if the rest of the film had been about their developing friendship as they cruised the New York singles scene together I wouldn’t have been mad. But Wilson never seems to land roles that require her to do anything beyond physical comedy and be loudly crass. So in the interest of plot or something, we’re also introduced to an ensemble cast of Other Single People who have various levels of skill at Single-ing.

There’s Lucy (Alison Brie), the ‘neurotic girl’ who’s created some kind of dating app algorithm (because of course she has), and is apparently incapable of seeing when a guy is feeding her a line.

Tom (Anders Holm), the owner of Tom’s Bar (inspired, right?), who is so determinedly commitment-phobic that he’s turned off the water in his apartment to ensure the women he brings home won’t stay any longer than it takes for them to have sex.

And of course Meg, Alice’s older sister/an incredibly successful Ob-Gyn who definitely doesn’t want to have a baby at all, until she holds one and the baby’s magic reacts to her witch magic and makes her want to have a baby. Even if she has to do it on her own.

It’s clear to see that How To Be Single is trying to subvert the romcom genre, and push into some new territory. The problem is that the attempts to critique just make other gaffes even more obvious. Like the fact that Lucy doesn’t appear to have a job or friends. At all. I mean, maybe she sold her dating app algorithm to Apple and is living off the profits now, but otherwise … ? And maybe Alice has literally no friends beyond her sister before she meets Robin because she lost custody of all the rest in the breakup? And maybe Tom isn’t a total fuckboi and I should actually feel invested in his journey? That last one is a pretty big maybe, though.

The other problem is the territory they lead you into is hardly new. It’s also not conclusions you couldn’t have reached about 12 minutes into the film. Also, for a film that basically encourages casual sex, it seriously lacks actual heat. I’m pretty sure the MA 15+ rating is entirely due to the sweary-ness of Rebel Wilson.

I’m going to have to say it’s a yay for the film and nay for the book. Dakota Johnson is developing a pattern of giving charming performances in movie adaptations of terrible books. And while this isn’t the greatest romcom type movie out there, it’s still got a few laughs in it.

As for the book, just don’t even bother. You’ve got better, more enjoyable things to do with your time than to read How To Be Single.

Content advisory: The book will infuriate you or bore you to death. The film will give you wardrobe envy.

You can find an extract of the book here. Published by Simon & Schuster Australia.