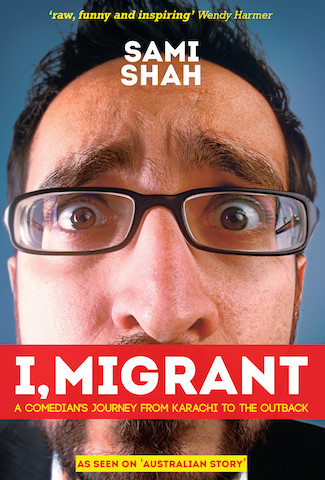 While it has its poignant moments, I, Migrant will leave you in good humour and a better understanding of why people leave their homes in search of a better life.

In the prologue of this charming, very relatable, hilarious autobiography, author Sami Shah is driving home from a gig in Perth and accidentally hits a kangaroo (this is not a spoiler). He then starts worrying about having his visa cancelled because he hit one of the animals on the Australian national emblem. While that sounds really funny now, I can remember thinking exactly this way when I first came to Australia, ten years ago: I must never do anything illegal or they will cancel my visa! No drugs, no illegal raves, no getting on a train without a ticket…except I still jaywalked. (I wonder if any other migrants share this experience of slightly paranoid musings.)

Sami Shah was a TV producer-presenter and ad exec in Pakistan. He moved to regional Australia on a regional skilled sponsored visa with his wife and daughter, after deciding they needed a safer place to live. He has become known in Australia for his sarcastic, acerbic stand-up comedy, and also for his appearance on Australian Story where he talks his experiences as an immigrant.

Shah’s story begins in Karachi, where he grew up. He talks about his childhood, getting into the comedy circuit, his work for Dawn TV, and through him we see how Karachi evolved from being just like any other capital city to one that people around the world associate with bombings and fear. Shah lived through many difficult and scary experiences, some which literally hit close to home. In an interview on his website, he says that everyone, at least by association, knows someone that’s been affected by what goes on in his homeland, and he talks about why he decided to leave.

Shah arrives in Australia, only to discover he lives 1.5 hours away from anything. (Welcome to… Well, actually Woop Woop is further out!) His new town ironically includes a detention centre for refugees. This becomes an interesting part of his skits, after he discovers the closest comedy club and goes in for an open mic night.

Shah’s journey is familiar to me as a migrant. Especially given the current situation with refugees, I felt that Shah provides good insight into the immigrant experience, providing some good background on what’s happening in that part of the world that makes people want to leave and find a better life. (Yes, he’s not directly from countries where people get on boats to leave, but if it’s difficult enough where he is, what more in neighbouring countries where there’s actual war? But let me get off my soapbox now.) I like that his story is presented with humour and sensitivity. He’s honest and very relatable, whether you’re a recent migrant or descended from one, just like everyone else in this country. After all, what person can’t relate to trying to find a better place so that your children can grow up safe and with better opportunities?

I would highly recommend this book, whether as a starting point to understanding immigration better, or just to laugh out loud about how shit happens and how you deal with it.

This book is published by Allen and Unwin.