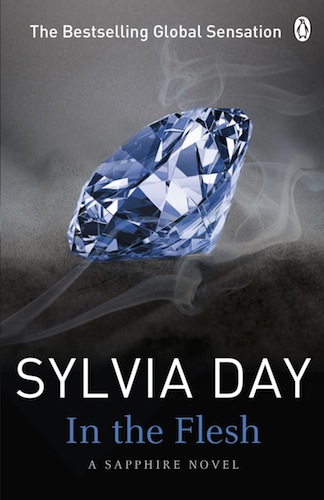 Review of: In The Flesh

A hero that will piss you the eff off and a heroine that we had such high hopes for... It’s a strange thing when you know that an author hasn’t been drawing you as she used to but something keeps you going back. It can’t be a healthy relationship.

In The Flesh is a Sapphire novel—which could make you think it’s a series but in actuality, Sapphire is just the name of the heroine. I originally assumed it was set in a Game of Thrones-style world but it’s more Star Trek in the desert. Actually, make that Star Wars on Tatooine.

Sapphire is the most prized concubine of the King of Sari (the kingdom, not the traditional Indian garment), and at the end of five years, he releases her from her contract. She’s super happy because though she loves the sex, she’s ready to be her own lady. Which is something that makes Sapphire cool. But because of the insane jealousy of the Queen, Sapphire finds herself in possession of a prisoner. And he’s not your regular prisoner, but this dude is her SWORN MORTAL ENEMY—Crown Prince Wulfric from the rival kingdom, D’Ashier. These two kingdoms have been at war before and it’s not just Wulf who has a personal connection to the fighting. Sapphire’s father is the General of Sari’s army. So we’re presented with the classic Oh No My Dad Hates You We Can Never Be Together But I Want You So Bad situation. Throw in a couple of kidnapping situations, abundant sex, and a world where concubines are traded and sold like cattle, and you have In The Flesh.

Though Sylvia Day hasn’t impressed me as of late (mainly because I keep getting ARCs for old titles with revamped covers and that annoys me) but I tried damn hard to keep an open mind for this one. The world-building was interesting with the new technology and language. And I thought Sapphire had quite a few positive attributes. But something kept bugging me throughout the entire book.

I’d recently read Smart Bitch Sarah’s review of Dance With Me so I think I was keeping that in mind while reading this book. I questioned myself to see if I made excuses for the books I read if shitty things happen that are problematic and confronting. Am I aware that it’s problematic? Or do I ignore it because it’s romance and a genre that I love so deeply? I hope that if I had read this book before reading Sarah’s review that I would have questioned the same things. But who knows.

Anyway, in this world, we have a market of concubines. Women go to a sensual arts school and it’s a respected profession. Earning a good contract with a wealthy/respected man is considered admirable. I think there are male concubines as well but it’s way less focused on. Day’s word for royal concubines—mätress—is a weird one. It looks and sounds like mattress—an inanimate object you lie on to sleep. I don’t think it’s a sexy or beautiful word. In fact, I think it’s a disservice to the women she’s painstakingly portraying as consenting sex workers.

Sapphire is the King’s key concubine—the most prized and the most loved. She’s released from her contract mere days before she meets our hero. The attraction she feels for the hero is immediate and visceral. The connection between Wulf and Sapphire is really intense, a hallmark of a Sylvia Day novel. But this time, it left me feeling strange. They were so into each other physically that the emotional was left by the wayside. Day stressed that sex was a way for them to become closer—not just physically but emotionally. It felt false. They couldn’t be in each other’s presence for more than five minutes without having sex. I appreciate that this is erotica and sex is required regularly. But even in the refractory period, they could have spoken about themselves more. Only the characters knew when they were making love compared to just having sex. To the reader, it looks the same.

What I found really problematic was Wulf’s behaviour. When Sapphire said no to sex, he decided to seduce her into changing her mind—and that’s how he gets her to reveal her past experience of sexual assault. Like, for fuck’s sake, dude. Have some respect for the words that she’s actually saying.  He says, ‘Nothing would stand in his way. Not even her.’ This isn’t in relation to some far off goal he’s trying to reach—it’s about seducing her and keeping her with him. He’s already violated her consent by kidnapping her. When the hero prioritises his wants and needs over the heroine’s I lose all respect for him.

At one stage, Wulf’s dickwad brother assaults Sapphire. He ‘viciously backhands’ her. Wulf then storms up and starts punching him (deservedly) but then he ruins it all by opening his damn mouth.

“You have no right to touch what’s mine!…No one is to discipline this woman but me.”

Are you kidding me? Any chance of him looking heroic was destroyed by using that disgusting D word. His possessiveness isn’t attractive, it’s not sexy. It’s overbearing and unwanted. (My notes literally say: WHAT THE FUCK YOU ARE GROSS.)

This is only the first instance of Duncan The Dickwad’s foul actions. A few chapters later, he tries to rape Sapphire.

A tackle from behind knocked the wind out of her. The heavy weight of a masculine body slammed her into the hard floor. Stunned, she struggled for air. As her assailant rolled her over, she was unable to breath.

She was trained by her father, so she’s able to defend herself and her reaction is pretty fucking cool. She draws blood, kicks him in the balls and is all lady-awesome. Wulf’s response is to beat the ever-loving shit out of the brother—I was totally cheering. But again, all he’s worried about is the fact that someone has touched something that is his.

One other section had me raging. Father and son are having a conversation about wayward brother’s repulsive rape attempt:

“Not for lack of trying. Had Katie [Sapphire] been a lesser woman, the outcome would’ve been different.”

On some level, I know what he’s trying to say. I know that he’s not trying to be a dick. BUT A LESSER WOMAN?! A lesser woman would have allowed herself to be raped? I can’t even comprehend how this went through several rounds of editing.

Sadly, Wulf doesn’t redeem himself. Later, when she’s hurting emotionally, he tries to make her feel better. With his penis. But when a lady is upset, she’s probably not going to be in the mood for sex so shoving your cock in her when she’s not ready is probably not the best thing you could have done. In fact, when she tells you you’re hurting her, you should be backing off. Not going on about how much you want her.

Consent isn’t a big thing for him though. Sapphire finds herself abducted by some sleazy concubine traders when she tries to escape Wulf and they drug her with a potent aphrodisiac. She’s crazy out of it and doesn’t recognise Wulf when he finds her. She’s mumbling about loving Wulf and asking this strange dude not to touch her. What does fuckface Wulf do? ‘Just pretend I’m Wulf. Pretend I’m the man you love.’ DUDE, YOU ARE THE MAN SHE LOVES. You don’t need to trick her to bone her! She’d rather bone you than some weird guy who’s trying to dupe her.

The book was full of this stuff and it was really uncomfortable to read. Sapphire was cool sometimes. I loved her open sexuality and kick-ass attitude. But she was also inconsistently drawn. Later on in the book, she states, ‘I would stay with you until you tired of me.’ It was just completely antithetical to her independent woman thing. The whole book hinged on this idea that women were consenting agents of their own sexuality—but the constant threats to Sapphire was undermining this, as well as the fact that this novel was dominated by men. There were probably a total of three female characters who had lines. But men were making the decisions and they drove the plot forward.

This book was too comfortable making a victim out of its heroine and privileging the hero’s wants and needs. Though the world-building and writing were quite good, it was a struggle to finish and I’ll be reconsidering picking up another repackaged Sylvia Day.

Who might enjoy it: Erotica readers who want teh sex

Who might not enjoy it: Those uncomfortable with problematic representations of consent and power plays

An advance reading copy of this book was generously provided by Penguin Australia.