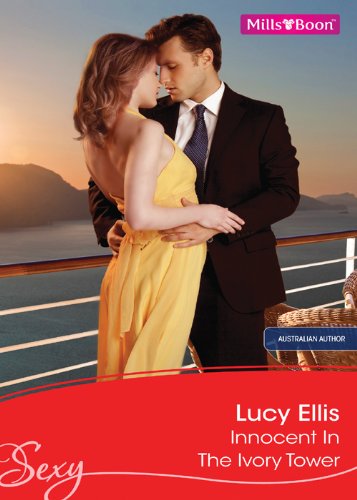 Review of: Innocent In The Ivory Tower

Skim through the beginning, because when this book gets good, it's, oh, so very good. Alexei and Maisy may reflect the traditional alpha male and ingénue pairing in category romance, but they don't always behave as expected. And that's a good thing.

When this book gets good, it’s, oh, so very good. Alexei and Maisy may reflect the traditional alpha male and ingénue pairing in category romance, but they don’t always behave as expected. And that’s a good thing.

This book is the reason I try to read past a bad beginning to get to the meat of a story. Maisy Edmonds has been left caring for her best friend’s baby, Kostya, when she and her husband die in an accident. When the house suddenly explodes with strange men, it’s all she can do to convince Alexei Ranaevsky that Kostya needs her.

Alexei is Kostya’s godfather and he takes his role seriously. So much so that without any warning whatsoever, he storms the house where the baby is living, agrees to bring Maisy with him to provide some constancy in the baby’s life…and proceeds to pash her when he accidentally but conveniently walks in while she’s clad in nothing but a towel.

First of all…WTF? Second, when a man barges into your house looking like he’s about to take the baby in your care, then forces you to be ready to join them, who the hell takes the time to have a shower? No, you find a phone and call the goddamn police.

If you can slog through that ridiculously over-the-top premise, you won’t be sorry, because the story is actually quite lovely, and Alexei generally comes across as someone who understands Maisy and wants the best for her.

Yes, there are times when Alexei verges into uber-alpha male domain, but author Lucy Ellis (who used to write as Lucy Snowe) pulls him back before he goes too far. There are some gorgeous moments in this book, and the book had me hooked after a scene in which Maisy throws Alexei’s accusations that she’s dressing up for the local men back in his face, and instead of acting like a petulant brat as I was expecting, he walks away. He sees through her bravado: ‘She was taunting him because he’d offended her. She didn’t mean to push his buttons. But she had.’

I’ll be honest. There are some odd notes in the dialogue, the plot and the characters, but none big enough to dampen my enjoyment of the story or my fondness for this couple. I think what I disliked most was a kind of underlying stereotype about how men and women behave—‘”If you leave it to the men they’ll never be ready,’ said [Alexei’s housekeeper]. ‘They always need a little nudge.”‘—but I’ll be the first to admit that this is poor criticism given that the book is published under Mills & Boon’s Sexy imprint.

And Maisy isn’t always your typical naive heroine. She shows flashes of naughtiness and humour that are just delightful. When Alexei invites her to fix herself up, Maisy wonders if, with enough force, the soap dish would crack his skull. When she has an orgasm after some vigorous but non-penetrative activity, she’s mortified that she’s used Alex as a sex toy.

But my favourite scene is an intimate one, and it’s writing like this that lures me back to category romance, time and time again:

Maisy hung on to him, but she had gone very still and quiet inside. Her instincts were telling her something and she didn’t want to hear it right now. Easier just to take him at his word. But those words settled like stones in her belly.

This was her power over him. This was what she used for leverage. She had just manipulated a situation her way with sex. Those games he had tried to play with her early on and quickly given up she had now instigated as her own, however unconsciously [sic].

But something about this relationship—probably to do with how it started, the imbalances between them and Alexei’s history—was changing her. Changing them.

Skim through the beginning, because when this book gets good, it’s, oh, so very good. Alexei and Maisy may reflect the traditional alpha male and ingénue pairing in category romance, but they don’t always behave as expected. And that’s a good thing.

Who might not enjoy it: Readers who expect a realistic plot

This book is part of a connected series featuring Alexei’s friends—all Russian heroes who grew up together in an orphanage. Unfortunately, I can’t find a complete list of titles and order of release. I think Innocent In The Ivory Tower is the third book, because it features two other couples who, I’m assuming, got their story in previous books. But I could be wrong!