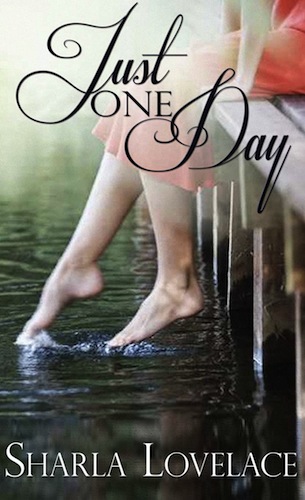 Review of: Just One Day

A sweet novella about second chances and following your heart, which goes to show that older heroines can be just as sexy, vulnerable and conflicted as any virgin mistress. A sweet novella about second chances and following your heart, which goes to show that older heroines can be just as sexy, vulnerable and conflicted as any virgin mistress.

Sharla Lovelace’s self-published novella features 44-year old Andie, who has just celebrated her two-year dating anniversary by throwing up spectacularly after a very public marriage proposal. Brad, her would-be fiancé, tells her to spend the day clearing her head before they make plans. He’s the kind of guy who has long-term plans for everything and is very good at making them happen. Having been married before, Andie senses she’s not ready to commit to Brad, but can’t quite pinpoint why her head and her heart are at war.

Andie finds herself driving towards the lake where, just after graduation, she had had a one-night stand, fallen in love and found her heart a little broken when her dream guy just left the next day. Stopping by a diner for a huge breakfast—Brad was a ‘two cups of black coffee and a protein shake’ kind of guy and waffles and bacon were going to be her rebellion, dammit—she’s charmed by an elderly couple only to discover that the diner is owned by none other than Jesse, ‘Mr. Hot Sex on the Beach’.

Trapped by an electrical storm, Andie and Jesse tentatively catch up on each other’s lives. Lovelace doesn’t shortchange these characters—they’ve lived full lives apart from each other. They acknowledge that their one night together had meant something, but the end of it didn’t paralyse either of them—they’ve both been married and had children. They’re also not coy, understanding that there’s still something between them. But Andie’s time runs out, and as her actions over the last 24 hours catch up with her,  she has to make a choice  between the two men in her life.

I requested this title from NetGalley on a whim, and was pleasantly surprised. Aside from a few typos and quite a lot of comma splices—most of which I was happy to consider as part of the narrative style rather than offences to Strunk and White—the writing is very polished, and the story is well structured and tightly edited.

Romance novellas are hit and miss for me, often because authors try to do too much with too few pages. Lovelace avoids this problem by limiting the timeline to just over a day, and by using the first person point of view. The demonisation of the health-conscious, career-driven boyfriend niggled a little, but Lovelace imbues Brad with enough charm to make him a little less one-dimensional than he might otherwise have been.

There’s a very small paranormal element to this story—seeing dead people seems to be a preoccupation with Lovelace, if I’ve read the blurbs of her two full-length novels correctly. This might bother skeptics, but I liked how it rounded out the story. I’m not convinced it was necessary, but it adds a sweet touch. On the other hand, there are three instances where the hero or heroine drops the F-bomb in the story, and they did not go unappreciated.

Also, I really want some waffles and bacon now.

Just One Day is a sweet novella about second chances and following your heart. There’s enough complexity in the heroine to enjoy the first person narrative, and it just goes to show that older heroines can be just as sexy, vulnerable and conflicted as any virgin mistress. (‘I’m too old for this shit,’ she tells Jesse.) As a bonus, the excerpt (see link below) is a vomit scene. And it comes straight after a marriage proposal. Awesome.

Who might enjoy it: Romance readers looking for older heroines

Who might not enjoy it: Readers attached to the third person POV

A reading copy of this book was generously provided via NetGalley.