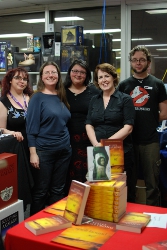 Last month, Galaxy played host to Kelley Armstrong and Maria V. Snyder, who were both in a talkative mood…

I got three books signed for myself: Bitten, Elena’s first book; Dime Store Magic, the first Paige; and my new copy of Waking the Witch, first in Savannah’s trilogy. Armstrong is another lefty.

I’d heard that the Otherworld series is winding down and there will only be one more book. ‘Yes, the next book is the last one and that will be Savannah’s. I just felt that since she grew up in the series she should have the last trilogy. Book 13 is called 13, but the number 13, not the word “thirteen”. I’ve been calling it book 13 for two years and the publisher asked for a real title and my agent suggested 13 and the publisher said yes.’

And you were just at the RWA conference? ‘RWA flew me out to do a few workshops. It was great to be around all those writers.’

Have you had time to do much fun stuff while you’re here? ‘Not really, there just hasn’t been time.’

I handed her a friend’s book and explained that she was interstate and couldn’t be here. I read part of the note she sent with her book where she described Bitten as the first book she read that made her fall completely in love with this genre. Armstrong was flattered, smiled and said, ‘That’s great,’ and made sure to personally include a bookmark with the book.

The person behind me hadn’t read any of her books yet, so she was happy with a signature and date. Armstrong confirmed that today was the 16th and I reminded her that it was the 15th in the US and Canada. Kelley found the time zones strange, because it took her three days to get to Australia, but she’d return home two hours before she left.

The next day Galaxy hosted Maria V. Snyder during lunch.

Someone asked her where she got the ideas for her books. She answered that when she came up with Poison Study, she had been advised not to write about the king or queen or prince or princess, or anyone at the seat of power, but instead to write about someone who was close to the power but didn’t actually wield it. She thought about a food taster because they would have to follow the royalty to all the meetings and generally go wherever they go. Her husband is (I think) a chocolate taster and, to research her protagonist, she pumped him for details of tasting techniques.

Snyder fills out a form describing her characters’ appearance for the art department, but there’s only so much detail you can give and they have to find models, so sometimes the art doesn’t always match. For Inside Out, they used a blue-eyed model, even though Snyder specified that the character had brown eyes. They didn’t want to change the artwork because the blue eyes popped with the title in a similar shade, so Snyder went back to her story and created a reason for the blue eyes.

She’s given a character an earring because the publisher decided the model looked ‘too boyish’ even though she was wearing makeup.

She goes through baby books looking for names with nice meanings she can use for her characters.

Snyder got to do some fun stuff while she was in Australia, like seeing a lighthouse in Byron Bay, and she did all her souvenir shopping in Melbourne’s Queen Victoria Market.

She was headed to New Zealand next and was horrified to hear about the unusually cold weather they’re going through at the moment. Her publicist prepared her well for the weather here and she hasn’t felt the cold.

Snyder signed a poster for the store and drew a picture of a goblet with a butterfly (but no dust, for those of you who have read her books) perched on the side where a lemon wedge would be.

I asked if her hands ever fell off after a signing and she said that she’s used to it now, but an important factor is the pen. You need one that just flows so you can write lightly. The wrong pen cramps up her hand (she’s right-handed).

She left soon after to get ready for her talk at Ultimo Library.