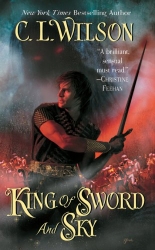 I love this series. I’ve always loved high fantasy, but I’ve often longed for more (and happier) romance in them. When I found C. L. Wilson’s Tairen Soul series, I was hooked.

King of Sword and Sky picks up the story where Lady of Light and Shadows ended. Ellie Baristani, truemate of the King of the Fey, travels to the Fading Lands where she hopes to find a way to save the tairen—fierce magical creatures—from extinction. But far from being welcomed by the Fey, Ellie is treated with increasing suspicion and hostility, and Rain finds himself constantly negotiating small but significant political battles, indicating that the Fey haven’t forgotten the years Rain spent on the brink of madness.

Meanwhile, the evil High Mage Vadim Maur dispatches minions to find weaknesses in the Fey’s human alliances and magical defences while he continues his breeding experiments to produce powerful creatures of magic whose souls are bound only to him.

When Ellie finally discovers what she must do to save the tairen, she knows that the solution will not only cast further suspicion on her and undermine Rain’s political standing, but it will likely lead her right into the High Mage’s clutches.

King of Sword and Sky reveals the social and political structures of the Fey and the tairen pride, and it’s nothing like I expected. I guess I was imagining the kind of harmonious elvish community in Tolkien’s Lord of the Rings or even in Feist’s Riftwar saga. Wilson introduces us to characters with different motivations and flaws that lead to personal conflicts. In Lord of the Fading Lands, we learned that Rain spent centuries on the brink of madness because of what he’d done to avenge the death of his mate, and it’s clear that not all Fey leaders are convinced he’s an able ruler. His and Ellie’s welcome is complicated by the presence of Gaelen, formerly dahl’reisen—and no longer welcome to his Fey kin—whose soul was restored by Ellie. Meanwhile, Ellie’s unconventional ideas and magical abilities cause tension among the Fey, who can be surprisingly insular. Ellie’s magic develops, although knowing that she has a problem believing in herself and in controlling how much of herself she puts into her magic, some of the big revelations in the story don’t have quite as much impact.

The tairen are much wilder than I’d imagined, and their fierce defence of their own and indifference to any plight that doesn’t affect the tairen pride create tension with the Fey. What Ellie must do to save the tairen from extinction was predictable since the first book; nevertheless, Wilson manages to build up to a reasonable climax. To be honest, the scenes with the kitling eggs were probably my least favourite. Enough of the lullabye singing and back into the action, I say. I’m also still not clear on how the soul magic works exactly, but maybe that’s because I’m not suppposed to until the final book. (Or I wasn’t paying attention, which is just as likely.)

The High Mage in Eld continues to use his Fey prisoners in terrifying and horrific ways. The torture scenes are very brief, but they’re more graphic that in the previous books. Almost every scene with a mage is harrowing and reflects the escalating battle between good and evil.

I must mention the scenes with Elfeya and Shan, which sent shivers down my spine. Their despair and pain and strength come through very strongly in Wilson’s writing. They’re my favourite couple in the entire series, and I wouldn’t be surprised if we get a prequel with their story. I love the way Wilson connects them to Ellie, and especially how Shan’s messages are (mis)interpreted by those around Ellie.

In Lady of Light and Shadows, Wilson showed that the truemate bond can compel people to act in ways that incur great personal cost or, in fact, prolong their suffering simply because they can’t bear to let the other die. In King of Sword and Sky, Wilson explores the ways in which a decision made by one person affects the truemate partnership, and this seems to be the underlying issue between Ellie and Rain throughout the book. Ellie makes decisions that she tries to shield Rain from, only to realise that her actions have a profound effect on Rain—that even something that seems harmless and good can in fact cause Rain to suffer.

Because Rain understands the concept of truemating much better than Ellie, he comes across as a lot more mature in this book. Ellie can seem impetuous or selfish, but because her motives are usually made with the best of intentions, it’s easy to see why she doesn’t always listen to Rain.

Elfeya and Shan provide a more extreme example, and again, I think their relationship overshadows Ellie and Rain’s. Take, for example, this scene in which they discuss the possibility of killing the High Mage:

“…there’s no way you could kill him without being slain yourself.”

She felt his soul sigh. Then he said, in a voice so soft and wary it made her throat close up, “After all these centuries of torment, can death truly be so terrible a fate, kem’san?”

The tears she kept telling herself she would not shed pooled in her eyes and spilled over. “Nei, teska, do not think that way. So long as we live, there is hope. A thousand years we have suffered. A thousand more would I bear, just for what few bells he grants us together. Do you love me any less?”

“Then promise me you will not do this.”

For a long moment he did not answer, and then finally, in a defeated whisper, “What choices we make, we make for us both. If you do not wish it, it will not be done.”

Wilson writes their scenes so beautifully that my heart breaks for the characters every time.

As far as the central romance goes, I felt that it was a little disjointed from the external plots. Rain whisks Ellie off a few times and while these scenes can be tender or passionate, I would’ve liked the physical aspects of their romance to be a little less secluded. Wilson does try and show their emotional connection developing as they struggle against the Fey and against the High Mage, but these scenes are usually filled with so much tension, the romance can get a bit lost in the action. (Or I’m a bad reader and I skim, which I admit happened a few times even while I was rereading.)

So many different threads are continued or introduced in this book that it’s impossible to cover them all. Suffice it to say, Wilson has set up a great battle for the final book. Some connections are made, characters are introduced, and there are some surprising revelations, but those threads are left open, and it’ll be interesting to see how Wilson ties them all up.

Oh, yay, for sure. I’m not sure this review reflects how much I enjoyed King of Sword and Sky. I love the way Wilson introduces similar issues between different characters and shows how each different motive or circumstance or reaction leads to different consequences. The fact that I find myself rereading the most heartbreaking scenes proves Wilson’s ability to move me. The external plot is well paced, and even if it’s predictable, I was so immersed in the moment of the story that I never really gave myself a chance to think ahead. Click here for an excerpt (PDF).

This review is my February entry for the Re-read Challenge. Click here for details. Queen of Song and Souls, the final book in the Tairen Soul series, is out on June 2.