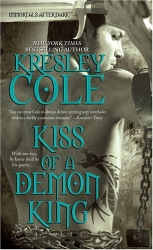 Rydstrom is the deposed King of Rothkalina, kingdom of the rage demons, who lost his kingdom centuries ago to Omort, the evil baddie who can’t die. Rydstrom has been trying to recover his kingdom ever since, with the help of his brother Cadeon, who is supposedly responsible for his loss of said kingdom.

Sabine, Queen of Illusions, is Omort the evil baddie’s half-sister. Thanks to a special hold he has over her and her sister Lanthe, she is stuck living with him,  to all appearances supporting his evil desires while at the same time plotting a better future for her and her sister.

Omort has been told via prophecy that Sabine is the destined mate of the King of the Demons and their son will be destined to unlock the secrets of the Well of Souls, a font of power within the castle that the Demons were created to protect before Omort usurped them all.  Rydstrom, as per the last book in the series, had just become aware that someone has supposedly created a weapon that could finally kill Omort.  On his way to get it, he is trapped by Sabine who is determined to seduce him and bear his child so that the prophecy can come to pass NOW.

Kresley Cole, as always, does a wonderful job of world building, down to the descriptions, the characters, and the different creatures of the lore that populate her world. Having read the previous novels, I didn’t find it hard to follow what was going on here. I will have to be biased in saying Rydstrom is my favorite hero so far, and I was waiting for this book for ages—ever since he first appeared as the brooding older demon brother in the previous novels.

In as much as you can make a demon and an evil sorceress realistic,  Cole manages to do so by bringing forth their emotions and desires. Rydstrom comes across as someone who has always done his duty, has never lightened up, doing what was expected even when it comes to finding a mate. When faced with the prospect that his mate is not just a non-demon but also an evil, not entirely virtuous sorceress, he also confronts other facets to himself that he either previously suppressed or didn’t know about—like his need for a stronger, more assertive woman vs. the submissive beauty. Oh, and a sudden liking for bondage.
I also loved Sabine, Queen of Illusions. She’s assertive and manipulative, she puts her needs before anyone else’s, and she always has a back up plan. These are all traits that I channel or have channeled on occasion.  So yes, of course, I liked her! :-D

I found the way they fell in love gradual enough, and it was, of course, made more plausible by the prophecy that stated they were MFEO (Made For Each Other in Sleepless in Seattle speak). I like how they complement each other, and how while they do develop changes to their personalities towards the end, they are not so drastic as to have you go, Whut? They are minor changes, allowing both of them to keep their intrinsic natures, with a little bit of compromise to go into the relationship as is meant to be. (Did I mention that the sex scenes were steamy and hot and wheeeew, I need to fan myself here?)

On the negative side, I felt the ending was a bit rushed. Yes, the focus was on their relationship and Rydstrom being chained to a wall, but the final confrontation with the action felt a bit like it was squeezed into the last two or three chapters. Also, this is not a standalone book. You can’t read this first. You have to read the other books in order, or at the very least, the book just before this one—the one with his brother Cadeon—to get a bit more explanation into the background of the story. Otherwise, you’ll know less than the characters do, which is not always a good thing.

Overall, I loved this book. I have been waiting for it for so long, I am extremely glad it didn’t disappoint. I loved both Rydstrom and Sabine, and I can’t wait for the next book. Who is next?!?