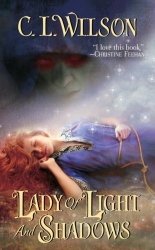 After reading Lord of the Fading Lands, all shame flew out the window and I e-mailed the publisher to see if they’d be willing to part with an ARC of the sequel. If at all possible, these two books should be read back to back because while Lord of the Fading Lands focuses on Rain’s courtship of Ellie, Lady of Light and Shadows develops the external plot further and adds much more complexity to the story.

Ellie Baristani has been claimed as the truemate of the Lord of the Fey, but as far as Ellie’s concerned, she’s a woodcarver’s daughter pretending to be a queen. Her first official engagement as queen ended in complete disaster when she accidentally wielded magic–of the lusty kind–right in the middle of dinner! Hers is an unpredictable skill that seems to get her into trouble time and again. Now, amidst the suspicion of her own family and friends, Ellie struggles to accept and control the magic she has always feared.

Rain Tairen Soul, King of the Fey, is convinced that his most bitter enemies, the Mages of Eld, are preparing for an attack. But despite his relentless campaigning, his allies are unable or unwilling to see the danger that is imminent. Meanwhile, he must continue to court Ellie so that she might fully accept their mating bond–for she is now his greatest vulnerability.

Never before has a Tairen Soul been truemated, but in acknowledging the mating bond, Rain has given his enemies a tempting target: Ellie. For Rain is sworn to protect her life, and her capture would give his enemies certain victory. Yet the High Mage of Eld wants Ellie for reasons beyond her connection to Rain, and he’ll stop at nothing to finally have her. As Ellie reveals more of her hidden power, it becomes clear that she’s no mere mortal. But will her true nature reveal the saviour that Rain has been promised or the deepest betrayal that will tear their bond apart?

Pretty much the entire book. Lady of Light and Shadows is a far stronger book than Lord of the Fading Lands. The writing is tight, the plotting is interesting and not always predictable*, the pace keeps me turning the page, and the worldbuilding is thorough but subtle. I love the parallels and contrasts that Wilson draws in the characters and situations, and every scene in this book just seems to fit. As I read it a second time, I pick up new details and nuances, and I’m left wondering if even the most minor characters will somehow be significant later in the series.

* I say “not always” because in fantasy, as in any genre including romance, there are certain things you can almost predict if you’ve read enough books in the genre. It’s not necessarily a bad thing, and if you’re not familiar with the genre then you’ll have more surprises to look forward to! :-)

This book explores the concept of truemates. Because Ellie doesn’t know much about the consequences of the mating bond, Wilson gets away with a little exposition through dialogue–but she doesn’t abuse it. It’s hard for me to explain this without giving away major spoilers, but I love the way Wilson shows the complexities of truemating in such vivid ways. There’s a particular scene–you’ll know it when you get to it–that captures the beauty and anguish of the bond. The way it’s written is just exquisite.

The warriors, they tremble.

Rain is an alpha hero, but there are always reasons behind his aggression. With Ellie, he’s tender and gentle and protective whenever she’s in danger. But I never feel as though he crosses the line from alpha to asshole, nor does he turn into a sap when he’s with her. I really, really, really appreciate that.

I usually include a very short excerpt from the book, but my favourite parts would all be considered spoilers.

I would have preferred to have stronger motivations for Queen Annoura. I’d prefer to have had a bit of insight into her doubts as they developed, rather than just getting her POV in certain scenes. I don’t find her an unsympathetic character, so I wish I could understand her better.

The big conflict between Rain and Ellie feels a bit weak. To be honest, I skimmed through it, and only during my second go did I read it properly. I think this could have been handled more deftly, and I wanted to feel more during this part of the book … but I didn’t.

I find the opening of the book rather weak. But this is really just a personal preference because I’m not a big fan of opening with a dream sequence. I don’t know. I didn’t find it all that interesting, but it’s only a few pages long, so whatever.

I’m also not a fan of the denoument. Again, this is a personal preference, but I don’t like ending on a big love scene. Actually, for me the love scene seems out of place (although I know it has to be where it is because Rain made a promise to Ellie’s father in the first book). I would have preferred it before the big reveal that causes a conflict in their relationship–the stakes would have been higher then–or maybe moved to the next book. For me, it just wasn’t the right place to end the book, but maybe that’s because I have my fantasy reader hat on rather than my romance hat.

Lady of Light and Shadows strikes the perfect balance between fantasy and romance. Some of the story elements remind me a little of Eddings, Le Guin, Feist and J. V. Jones, most of whom have written classics in the fantasy genre. Most of my criticisms of this book are really just nitpicks because Wilson weaves an exciting tale with some very strong writing. This series is now an auto-buy for me, and Lady of Light and Shadows is on my keeper shelf.

This book is second in a continuing series. For context, you should first read Lord of the Fading Lands. Click here for excerpts and here to buy this book. You know you want to.