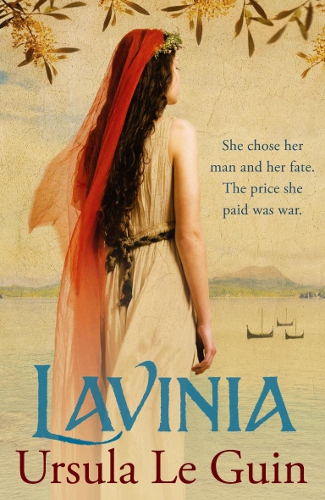 When I realised I couldn’t, in good faith, review this book—the reasons for which are outlined below—I asked my friend Gutsy if she’d be interested in reading it. Gutsy and I share a love of beautifully written fantasy novels. She’s the only person to whom I’ve ever lent my Patricia A. McKillip hardbacks. Gutsy is currently doing her PhD in Children’s Literature.

Anyone who’s read The Aeneid would have learned that Vergil had considered it an unfinished work. Ursula K. Le Guin spun that concept into her version of the events that led to the founding of Rome and moved beyond Vergil’s ending, beginning from an ending she herself imagined of what had become of the heroes of The Aeneid after the war had been won.

Lavinia, princess of Latium, tells us the story of how she came to be promised to a foreign hero causing a war to be fought in her name. We walk with her through the forests of an Italy far removed from even the ancient Rome we are familiar with, from the innocence of her girlhood to the burdens and joys of an awakened womanhood and to her days as the mother of Rome.

So, does it have a happy ending?

And so I begin my review with this: Lavinia does not have a happy ending, but neither does it end sadly. Le Guin does not change the ending but moves beyond the myth of ‘happily ever after’. Yes, that sounds suspiciously like real life.

I do not consider this a spoiler, because Lavinia herself begins her tale at the end with a reflection of her own mortality—and what’s more, of her own fictionality as a character in an ancient tale—in the light of being left behind by the ones she loves most.

Le Guin took the few lines Vergil wrote on the princess of Latium and breathed life into her, giving the name Lavinia flesh, a heartbeat and a down-to-earth voice filled with compassion, intelligence, piety and honour:

Like Spartan Helen, I caused a war. She caused hers by letting men who wanted her to take her. I caused mine because I wouldn’t be given, wouldn’t be taken, but chose my man and my fate. The man was famous, the fate obscure; not a bad balance.

Lavinia is aware of the inescapability of her destiny and shows us the wisdom in choosing the paths the gods lay at our feet and the freedom that comes with doing so.

I think of her as a woman’s heroine. She is silent yet not voiceless. She watches and sees the truth, and draws courage from doing what she knows is right even as she is caught between her love for her benevolent father, her fear of her mad mother, her anxiety over the attentions of her many suitors, the visions she has of a great poet from the future whose words create her life, her attraction to the mysterious hero Aenaeas, and the knowledge that the future of her country lies in her hands.

With Lavinia as the heroine, Le Guin brings to light the domestic side of Vergil’s epic. History buffs may enjoy the careful detail Le Guin takes in describing the management of a Latium household and kingdom. She deftly weaves the mythical and the mundane so that we, like Lavinia, carefully tread the thin line between fact and fiction.

I thought I would get annoyed at Lavinia because she seemed so ordinary for a princess. I realized after a couple of pages that her ordinariness was her strength. She was a princess of a land that may or may not have existed and, although the context is fantastically removed from our own twenty-first century concerns her emotional turmoil, her reflective character, and her womanly tasks as daughter and wife, although set in a different time and place, are so relatable. There were moments in the book where I felt bogged down by the details of running the household or preparing the sacrifices or the ups and downs of marriage, yet overall I enjoyed walking Lavinia’s path with her. Lavinia completes The Aeneid by giving the epic a woman’s voice and reminding us that all stories have more than one side to them.

A tribute to Vergil

Lavinia is Le Guin’s loving tribute to Vergil. She writes the poet into her own work, blurring the line between myth and history, story and fact. Lavinia’s conversations with Vergil are some of the best scenes in the book, standing as they do in a space that exists between fiction and reality. Lavinia herself questions her existence, wondering if she is only the product of a poet’s imagination and knowing that in the end it didn’t matter. What was important was the quality of life she led and who she allowed herself to be in the space that lay between her destiny and herself. In making us aware of the relationship between an author and the characters she created, Le Guin makes our minds turn to our own relationships with the powers that be, the universe and everything.

Le Guin’s prose is written so beautifully. I felt like I had walked into a tapestry, each word a thread skillfully woven into the next. I was totally immersed in the lovely and terrible world she created that I knew was imaginary but also loosely based on the actual past of Italy. I found the narrative to be as carefully crafted yet less dense than that of her Earthsea Quartet.

If you like Le Guin, Lavinia is a must-read. If you enjoy reading retellings of myths, fairy tales and folk tales, Lavinia is masterfully written and adds new dimensions to the epic tale. If your definition of a happy ending is a wedding, then put the book down and move on. But if a happy ending for you is one where the heroine grows into a woman who knows her mind and knows herself no matter the conditions of her fate, then you will not regret getting to know Lavinia.