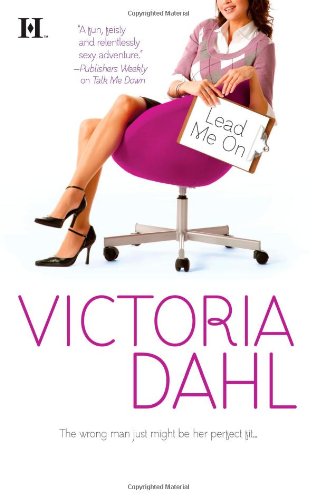 Review of: Lead Me On

The heroine's struggle for self-acceptance may get a little dull, but a sexy hero, some hilarious dialogue and the snappy writing make this book a delight to read.

Lead Me On is the third book in a connected series set in Tumble Creek, Colorado, although the plot and characters stand alone and there’s absolutely no reason you couldn’t read them out of order.

Jane Morgan has changed her name and appearance to shed any trace of her troubled childhood, and the last thing she wants is a man like Chase—not only does he blow things up for a living, he’s inked and clearly so far away from the conservative, suited up man she’s looking for that she really should never have called him while tipsy.

Chase agrees to be Jane’s birthday present to herself—despite the prim demeanour, she’s completely uninhibited in the bedroom—he’s outraged when she sneaks off while he’s in the shower.

I love the way Victoria Dahl sets up these two characters. Jane, with her insecurities and snobbiness, could have been irritating if not for the humour and passion that Dahl provides. Chase is a hero to swoon over. He looks like a bad boy and used to be somewhat of a bad boy, but by the time the story starts, he’s in the right place in his life to be the dependable and patient guy that Jane needs.

It turns out that Jane’s mum used to chase after men in prison for life, and Jane refuses to be like her mum. She was also pretty wild as a teenager, and after an incident that changed her, Jane is determined never to be that girl again.

Of course, Chase is the perfect guy for her. He’s just bad enough to push her buttons, but mature enough not to be a destructive force in her life. I love that he calls her out on ‘being fucking rude’ and treating him ‘like a worthless piece of garbage’ after their first encounter. I love that he gets angry with her, but doesn’t issue ultimatums and believes in Jane enough to give her space to work it out in her head and in her heart.

Dahl reverses some typical romance roles in this book. Jane is the one who insists on a casual relationship, and she’s the one who initiates the booty calls. Chase is first to recognise and admit his deepening feelings for Jane, and he’s the one who attempts to seduce her into capitulating—by withholding sex and then shaving his head so his tattoos stand out.

Jane snatched up the phone and flipped it open. She’d promised herself she wouldn’t call him, but here was a way around that.

Pulling up his number, she typed out a text message.

Want to come over?

She counted to ten. Then counted again. Then she set her phone down and walked away from it to make it beep. It worked. Jane raced back and picked it up.

She scowled at the screen.

This time she didn’t put it down—she only glared and waited, tapping her foot. Finally her answer arrived.

Thank you, but no. Have a good nite.

‘Oh, you bastard,’ she huffed, tossing the phone onto the couch. ‘What kind of man refuses sex?’

Jane’s journey to self-acceptance is a little heavy-handed at times, but Chase provides a good foil for these moments. Still, I would have preferred her to develop more gradual sense of awareness rather than an epiphany that felt contrived and banal.

The secondary characters in the story don’t get much character development, so they tend to seem like cardboard cutouts, particularly Jane’s ex-boyfriend. To Dahl’s credit, though, the external plot doesn’t detract from the romance.

One last thing: I love a hero who never forgets to use a condom. There’s a fantastic scene in this book where Chase is tempted to go without, and Jane pretty much gives him permission, but he controls himself enough to get the thing done. With much swearing involved. I also love a hero who knows when it’s appropriate to say adult words.