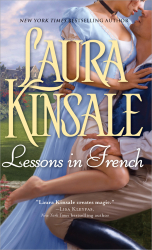 Laura Kinsale’s long-awaited new release is a bit of a romp and a laugh—the Kinsale book for readers who don’t like Kinsale.

Laura Kinsale is my favourite romance author bar none, so when I found out that Sourcebooks was releasing her Regency romance this year, and then AnimeJune offered to lend me her ARC for review, I lost my mind just a tad.

That said, Lessons in French isn’t my favourite Kinsale.

Callie Taillefaire is a thrice-jilted spinster who suddenly finds herself reunited with her childhood friend and almost-lover, Trevelyn. Callie’s father once caught them in a compromising situation and Trevelyn disappeared soon after. She later learned that he had gone to France to reclaim his family estate.

When Trev returns to take care of his dying mother, Callie becomes embroiled in a madcap scheme involving a not-technically-stolen bull, a suitor who seems intent on unjilting her, and conflicted feelings about Trev. For Callie, the outrageous scheme brings to mind their childhood games, instigated by Trev, which I imagined to be a gentler, more innocent version of Jeux d’enfants—although maybe it’s because Trev is French and so is Guillaume Canet and I’ll take any excuse to post his picture (below right), because, hello, have you seen him? But I digress.

As it turns out, Trev is keeping some rather significant secrets about his life away from home. He doesn’t feel he’s worthy of Callie, and in fact has some serious reasons why he can’t stay, much as he’d like to. But Callie knows nothing of this, so her self-esteem takes a bit of a dive, and she contemplates marriage with the persistent suitor, Major Sturgeon.

I don’t necessarily have a problem with the lighter tone of this novel. I think Kinsale’s craft comes through very clearly and even when the plot is at its most absurd Kinsale has a way of making the words on the page mean something. This is what I love most about her writing. It’s not lost in Lessons in French, and there’s even a glimpse of her more dramatic style, which helps give the story a lot more depth than a plot revolving around a missing bull might imply. But this is a double-edged sword because I found it much more difficult to downplay the issues I had with this book in the same way I would with a different author.

There was something slightly disturbing about the dynamic between Trev, the risk-taker, and Callie, who relies on him to ensure she gets out of their scrapes without harm: ‘In truth, Trev might be a practiced villain, but she feared that he had not required much practice to lead her astray.’ She later reprimands him for a scheme gone very wrong, but I felt Trev was a little too reckless and careless of Callie’s reputation, especially as he wouldn’t have been able to protect her with his reputation if something went wrong.

Also, Trev is a virgin. Yes, a virgin hero! But given his past and what he endured—which I won’t spoil here but I’ll be happy to discuss via the comments below—this just didn’t feel plausible to me. Your mileage may vary.

But most of all, Trev felt a bit emotionally unstable throughout the book. On the upside, I like that Kinsale doesn’t make him out to be a superhero; on the other hand, I question whether he has the emotional maturity to sustain his relationship with Callie. I mean, it’s a romance so I was absolutely willing to believe it based on whatever reasons Kinsale could put before me, but I won’t lie—it niggled.

As for Callie, I liked her at the beginning of the book—she’s practical and quirky and it’s clear there’s little she wouldn’t do for the people she cares about. But when she accepts Major Sturgeon’s marriage proposal I was just aghast. It seemed like a completely insane thing to do, given that he propositions another woman while he’s courting her and insults her behind her back. I didn’t feel that the decision reflected the way her character was developed in the earlier part of the book.

Fortunately, Callie redeems herself by doing some clever scheming of her own, thereby enabling her own happy ending. I also loved the way she stands up to Trev when he goes too far with a prank.

Getting back to the writing…

Despite these flaws, when it’s a Kinsale romance, it all comes back to writing for me. I can forgive almost any character inconsistencies for gems like this: ‘She fell asleep contemplating these joyful plans, her pillow soaked in tears.’

Kinsale hasn’t lost her touch for delicious angst and longing—‘He resisted the urge to pull her up to him and kiss her into acquiescence, holding her cheeks between his hands and breathing his recklessness into her’—but it’s tempered with some seriously entertaining word play:

“My God.” He pushed away from the bedpost. “Friends! And do you fall into bed with any man who’s ‘dear’ to you? How am I to take that?”

“Of course I don’t.” She stood up, letting the knotted scarf slip away. “I can’t seem to help myself. With you. About that. It’s extremely vexing.”

“You’re quite right on that count,” he said sullenly. “I’m damned vexed. I’d like to vex you right here on the floor, in fact. And the idea of Sturgeon vexing you is enough to dispose me to murder.”

This is the Kinsale book for readers who don’t like Kinsale. The lighter tone, quirky plot and unusual heroine may be more accessible for readers who can’t understand why people like me hyperventilate at the thought of a new release from my most auto-buy of auto-buy authors. To say that Lessons in French isn’t my favourite Kinsale is like saying gelato isn’t my favourite dessert—it’s not chocolate cake, but it sure as hell still tastes good.

An uncorrected advance copy of this book was generously lent to me by AnimeJune from Gossamer Obsessions. What a legend.