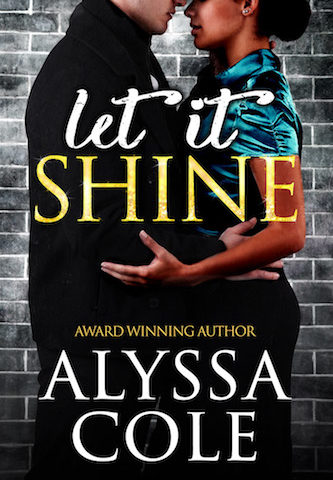 Review of: Let It Shine

The beauty of a historical romance set in living memory is that all you have to do is think about the people in your own life to realise that it can have a permanently HEA ending. The beauty of a historical romance set in living memory is that all you have to do is think about the people in your own life to realise that it can have a permanently HEA ending.

This review is based on a free copy of the book give out at the 2016 RT Convention.

If you’ve heard the RT wrap-up episode of the Book Thingo Podcast you may be aware of my love for Alyssa Cole, and the fact that when I wasn’t subtly stalking my other romance-author-crush Alisha Rai, I could be found at Cole’s panels. So it’s no surprise that when Cole and Rai tweeted they were giving away free copies of their books at the RT Club, I was definitely there in time to win some. Including Cole’s latest novella, Let It Shine.

Let It Shine is a novella-length historical romance set in 1960s Virginia where the US Civil Rights Movement is in full swing, and Sofronia (Sofie) Wallis, a young Black woman, has begun to question her place in her home, her community, and the Civil Rights Movement. When Sofie decides to attend a meeting about the non-violent protests happening across the South, she begins to find her inner agitator. And she meets Ivan Friedman, a young Jewish man who has dedicated his life to boxing.

There are so many compelling aspects to Let It Shine. But the thing that spoke to me the deepest was Sofie’s awakening as an activist and as a young woman recognising the injustices that surround her. Her anger, which often simmers just below the surface, is palpable and oh-so-relatable because it clashes so deeply with respectability politics. Sofie balances the idea of being a Nice, Respectable Woman with her genuinely deserved rage, because she knows how easily Angry Black People (particularly women) are discounted. In fact, it was truly refreshing to see a romance novel — at its heart (pun intended) about privileging emotions — which recognises the way ‘negative’ emotions can be used to dismiss someone.

For all that I connected with Let It Shine on a sociopolitical level, the romance between Sofie and Ivan is truly gorgeous, too. Sofie and Ivan were childhood friends, while Sofie’s mother was employed by Ivan’s parents as a servant until her untimely death. And when they meet again as adults, at a Student Nonviolent Coordinating Committee meeting, the sparks fly.

Considering how much is stacked against them as an interracial couple during a time when their marriage would have been illegal, the romance that develops between Sofie and Ivan is incredibly sweet. The power balance between them (societally speaking) is incredibly uneven, and could easily have slipped into exploitation. But as much as Sofie is able to hold her own against Ivan, it’s equally important that he never consciously puts her in the position of having to.

“Sofie.” He wasn’t one for emotional displays, but it seemed that every minute that went by without him revealing how he felt was a moment lost. “I know you have lots more important stuff to worry about, but I’d like to take you out. I understand if you say no, but I can’t stop thinking about you. I never have, if I’m being perfectly honest.”

I know that some people avoid diverse historical romance novels because there’s a high potential for unromantic aspects of real life to intrude on the HEA after the pages stop turning. Like slavery, or disease, or the government policies like Australia’s assimilation and protection policies that led to the Stolen Generation.

But the beauty of a historical romance set in living memory is that all you have to do is think about the people in your own life to realise that it can have a permanently HEA ending. In fact, when I sat down to write this review, I realised my actual parents slip into this story quite comfortably. I come from a mixed-race family, with a Black (Aboriginal) mother and a white father, who met because they were both involved in Australia’s Civil Rights and Land Rights Movements. And while I might not understand why my mum chooses to spend her days with an old grouch like my dad, after 35-ish years of marriage, I think it’s safe to say they’re living their version of an HEA.

I’ve been reading romance novels across a huge spectrum of subgenres, and this is the first time I’ve ever read anything that comes close to representing one of the most important real-world relationships in my life. Which is why we need diversity in romance, I guess.

Racism and violence are huge themes here. There are some scenes that can be distressing. Cole doesn’t shy away from the brutality that was inflicted on Civil Rights Protestors (or, really, just anyone who wasn’t a white Christian). Some of the terms, and the way they’re hurled at Sofie, Ivan and their friends, gave me that internal flinch. That said, Cole handles these scenes with great care and skill.

Let It Shine isn’t just a must-read, it’s a keeper. I could go through all the reasons why (other than the ones I’ve already mentioned) but really I’d just be taking up valuable time you could be spending buying and reading this beautiful, special, delicious book.

Content advisory:  In the wise words of Alisha Rai: This book will break your heart. But it’ll put it back together stronger and better.

You can find an extract of the book here. Published by Seditious Sisters.