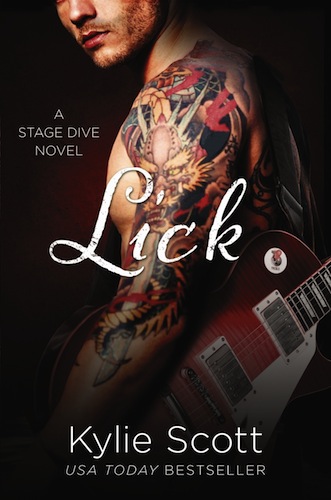 All the feels of an intense romance without sacrificing the heroine's personality. All the feels of an intense romance without sacrificing the heroine’s personality.

An advance reading copy of this book was generously provided by Momentum Books via NetGalley. This book has been re-released with a new cover by Macmillan Australia.

Ev wakes up after a big night in Vegas with a sexy blond stranger, a tattoo on her bum,  a five-carat diamond ring on the wrong finger, and zero recall of what happened. So she does what any twenty-one-year old with a tequila hangover does—she pukes and then she contemplates divorce while brushing her teeth. It turns out that Ev’s new husband, David, is the lead guitar for the hugely successful band Stage Dive. Unlike Ev, David remembers their wedding clearly, and is obviously hurt and pissed off that she was a lot more inebriated than he had thought.

Kylie Scott turns what could have been a daggy, over-the-top premise into a whirlwind start to a romance that is at turns sweet, erotic and fun. Ev’s first-person voice is strong, contemporary and on the odd occasion that she breaks the fourth wall, I suspect most readers won’t even notice, such is the flow of the narrative. This text conversation between Ev and her best friend Lauren, who is a massive Stage Dive fan, is a great example of the book’s sense of humour—funny without being sentimental, with a sense of self-assurance that people in their twenties are so good at pulling off:

Lauren: Whatever happens, do not break up the band!!!

Lauren: But break his heart. He wrote San Pedro after what’s-her-face cheated on him. That album was BRILLIANT!

Me: Promise to leave him a broken quivering mess.

When the paparazzi learns of Ev and David’s Elvis wedding, Ev takes up the offer to lie low for a while and hang out with the band while divorce papers are prepared. Memory lapse aside, divorce can’t come soon enough after Ev walks into a house party to find new husband entertaining the attentions of a groupie, and later, witnesses David’s violent reaction when vocalist Jimmy propositions her in a corner.

When Ev is confronted by David’s aggressive manager and lawyers, it’s the final straw, and she storms out in anger at the implication that she was after David’s money. Drummer Mal offers her sanctuary at his beach house to give her time to think, away from the press and the lawyers. For a very brief time I thought maybe Mal would turn out to be the hero, such was his charm. He’s the comic relief in the story and is clearly destined to be the favourite among readers of this series.

David follows Ev and with some reluctance takes her back to his house so they can work out what to do next. Ev realises that she really did hurt David and wants to make up for her lost night by making new memories with him. As they spend more time together, Ev and David realise that the connection between them is still there and worth exploring. David also starts writing songs again, and when this happens, Ev gets to see how the band works and comes together, slowly coming to realise what being a real wife to David would entail.

The sexual chemistry between Ev and David is deliciously written. There’s no nana sex between these two, and Scott writes everything from using condoms, to oral sex, to copping a feel at inappropriate times in a way that feels sexy, honest and ever so slightly on the edge. I’m almost tempted to categorise this book as erotic romance, except that the explicit scenes don’t really feel like they’re an exploration of sexuality—more that, well, this is what young people do. They explore, and they have fun, and they learn what rocks their socks off: ‘His cock twitched and I jerked back, startled. David burst out laughing, loud and long. Bastard.’

Ev is a welcome change from the usual new adult romance heroine who often seems to be a virgin in spirit if not in body. Though she had a fairly traumatic deflowering experience prior to David, Ev doesn’t dwell on it too much, and she isn’t shy about claiming her pleasure. Readers weary of euphemisms and glamourised sex should find Scott’s writing a welcome relief.

But despite Ev and David’s sexual chemistry and their acknowledgement that they seem to be heading towards something pretty special, it’s clear that they haven’t been completely open with each other. David, in particular, refuses to talk about the ex-girlfriend who cheated on him. When Ev finally learns the sordid details, it’s much more shocking and heartbreaking than she had expected—she walks out on David and he issues her an ultimatum that Ev refuses to take.

David’s big secret provides the dark moment for the story, but there’s something missing in his and Ev’s emotional arcs. I often felt that darkness is alluded to but never builds up enough momentum to make me anxious about the happy ending. The story is missing the moments between the emotional complications and their resolution. Ev’s decision to make the marriage work, for example, doesn’t seem grounded in anything more than how much she’s drawn to David’s manly ways of being jealous of seeing her with his friends, and his propensity to walking around half-naked. David’s dark moment is so terrible, yet his decision to come back to Ev feels one-dimensional, despite his grand gesture.

Ev’s personal arc also disappointed me. Essentially, she gives up a promising career in architecture when she realises it’s her father’s dream and not hers, and decides to stick to being a barista. I might have understood the decision better if Ev had some other ambition or if she wanted to be the world’s best barista, but it felt like she basically gave up and now that she doesn’t have to worry about money, she’s happy not to have ambitions of her own. Ev’s character didn’t end up at a place where I felt I could imagine how the rest of her life would turn out. I also felt that her father was unfairly demonised, and I think this aspect of the story could have been much more subtle and complex than it was.

Author Kylie Scott was voted Australia’s favourite author partly based on this book (Scott was also nominated for Skin, a romance set in the zombie apocalypse), and it’s not difficult to see why. David embodies everything readers love about alpha heroes—he’s an amalgamation of the possessive vampire, the glamourous billionaire, and the emotionally unavailable teen crush waiting for the woman worthy of his trust.

‘Do you actually state what a pain in the ass I am in these songs?’

‘Not those words exactly. No.’ He chuckled, his good humor returned. ‘You don’t want me to lie and say everything’s fucking unicorns and rainbows, do you?’

‘Maybe. Yes. People are going to know these are about me. I have a reputation as a constant delight to protect.’

But for me, it’s Ev who makes this book awesome. She’s not a heroine who is easily pigeonholed. One aspect of her personality does not define the whole of her character, and I was continually surprised by her. David is such a romantic archetype that a lesser heroine would have languished in his shadow, but Ev is just as memorable and as charming as her hero.

Readers who love heartthrob heroes but feel let down by wallflower heroines should find Lick refreshing. It has all the feels of an intense romance without sacrificing the heroine’s personality. The characters get sweaty and smelly, they’re messy drunks and ugly criers. They’re surrounded by great friends. Kylie Scott is one of Australia’s rising stars in romance fiction, and her flair for witty dialogue, complex but charming characters, and dirty, messy, fun sex is a delight to read. This series is definitely an autobuy.

Content advisory: Penises! Vaginas! Cunts and cocks! And nary a clenched womb or a weeping core to be found.