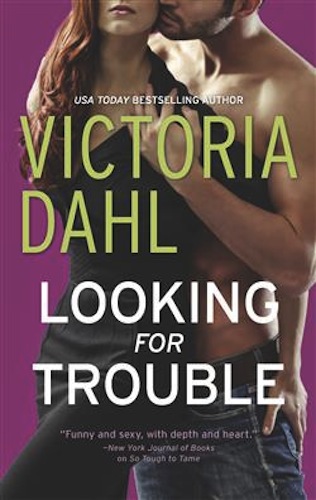 If he had a beard, the hero would be the actual perfect man.

Kat’s note: When Rudi of the Famous Romance Shoes mentioned she was looking forward to Victoria Dahl’s latest book, I couldn’t pass up the opportunity to invite her over for a guest review. An advance reading copy of this book was generously provided by Harlequin Australia.

Rudi Bremer is a romance genre nerd, emerging radio broadcaster, and the owner of some pretty amazing shoes. After reading countless articles suggesting all romance readers must want a man exactly like the heroes they read about, she began her search for a Scottish werewolf with a dukedom. She is still searching, but remains hopeful.

‘Yes.’ He barely heard her this time. The delicate, innocent pink of the panties was getting darker under his touch as her wetness soaked through the fabric. That was getting to be one of his favorite sights.

By all appearances Sophie Heyer is a sweet, unassuming librarian, but as you know, you can never judge a book by its cover. Lucky for Sophie, Alex Bishop sees through her facade almost as soon as he rides into town, tempting him to find out what’s hidden underneath her prim demeanour.

Sophie and Alex actually have kind of a tangled family history. Her mother and his father had an affair before disappearing, creating one of the biggest scandals sleepy little Jackson Hole has ever seen. In fact, Sophie still feels the repercussions of it decades later. And here’s where I started to develop issues with the book.

First, Sophie, who is the first to realise their connection, decides not to say anything to Alex. She acknowledges there’s a strong possibility he wouldn’t want to be involved with her if he found out, and considers walking away herself, but basically she’s too intrigued by Alex and decides to keep this key (possibly dealbreaking) information to herself.

My second issue is that despite this being the first in the Girls’ Night Out series, regular Dahl readers will realise it’s kind of more like the fourth addition to the Jackson Hole series. Alex is the younger brother of Shane Harcourt, the hero from Too Hot to Handle, and key elements of Alex’s backstory are drawn directly from this. It threw me a little at first, and to be honest I feel like anyone who does try and read this in isolation would struggle to understand the dynamics between Alex and his family.

But look, there are so many other fantastic elements to this book that you can overlook what are ultimately minor concerns. If there’s anything Dahl does better than sexual chemistry it’s female friendships. The series is called Girls’ Night Out, and Sophie, along with her best friends Lauren and Isabelle are absolutely women I would want to go out for dinner and drinks with. They’re clearly ideas women.

Isabelle stuck out her foot to show off cute black wedge boots. ‘Ugh. Yes. I’m considering getting laid sometime this decade. My neighbor talked me into ordering these online.’

Lauren rolled her eyes. ‘You wouldn’t have any trouble getting laid if you left the house more often than once a month.’

‘I don’t want to leave the house. I don’t know why a man can’t be delivered along with my art supplies.’

Sophie spends a lot of time worrying what other people think of her, and cops some pretty awful treatment at the hands of one particular character, so it was really lovely to see her let go a little around these women.

Oh, and did I mention how hot it is? Or that Alex has tattoos? And he rides a motorbike? Which he takes Sophie on? And that Dahl manages to make a potentially dangerous mid-ride grope seem like an amazing idea?

Alex slowed around another curve, then, as he straightened the bike out again, he slipped his hand a centimeter higher on her thigh. Then another.

His fingertips tingled from the intensity, the anticipation. And finally, he felt it. The smooth seam at the top of the stocking. The slightest rise of the edge. Then…bare skin. Bare hot skin.

She was wearing stockings. And a garter belt.

Holy shit. Something feral inside him roused itself.

Also, Alex rescues a kitten. For reals. If he had a beard he’d be the actual perfect man.

I absolutely loved Looking For Trouble and would recommend it to everyone. Victoria Dahl is the queen of creating sexual chemistry that, scene by scene, will strip away the layers of her characters and leave you more than a little breathless. But read Too Hot to Handle first, or you may feel a little lost.