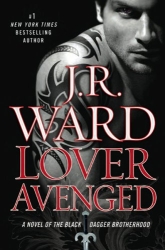 I’m not making any bones about it—this is the fangirl review. I am a frequent visitor to the message board, and the first thing I do is check J. R. Ward’s profile to see if she’s posted anything new about the series. (Did you know that Ehlena was the nurse who brought Butch a cup of coffee when he visited the clinic in Lover Awakened and that it was her first day on the job? Or that she was the nurse who knew how to shoot in Lover Enshrined?) I’ve even taken time off work to attend chats with the Brothers.

I bought Lover Avenged for around the same price that Kat did, but since I bought it from Ward’s virtual signing (you order the book from her nominated store and tell them how you want it personalised, then she signs it in the comfort of her home and posts it out), that includes shipping from the US. Unfortunately, the damn publisher’s embargo meant that no books were allowed to be posted until the release date, so I received my copy after Part 9 of the cheat sheet was posted.

I’ve commented on a lot of the technique in response to Kat’s review, so I won’t repeat it all here.

I liked how the ambivalence of Rehvenge’s dual nature was handled, and even though my BDB reading experience has taught me how to recognise a misdirect in many cases, Ward still manages to blindside me with something completely out of the blue.

I don’t mind the book’s staple of slang and how nouns are used as verbs because it makes the language more colourful and reminds me I’m reading J. R. Ward, just as a man who “panders to her senses” reminds me I’m reading Stephanie Laurens, or someone with “whips of lightning” in their veins can only be one of Christine Feehan’s Carpathians. Only a few times in the whole series, I’ve been hit by cultural bias and some American expressions just don’t compute with my Australian background.

I can’t really express the ways I was impressed with Rehvenge without revealing some major spoilers, other than that he proves his worth (that’s not too spoilerish, is it? After all, he IS the hero), but there were a couple points I would like to have seen further developed.

Ward has refused to answer questions about the black ink designs on Rehv’s stomach, which led me to the conclusion that they gave away more about his identity and background than she wanted to reveal at the time, but they were only briefly mentioned in his book. I was kinda looking forward to an in-depth description of his ink and how it visually worked with the muscles of his pack. :( Call me superficial, but the description of his body in Lover Revealed helped me to start liking him.

His scenes with Marissa in Lover Revealed were hot, and when he kissed her, he seemed to feel no concern over how much physical pressure he might be exerting. He had felt this concern when hugging Bella in Lover Awakened and it’s understandable given that the dopamine that controls his symphath urges also numbs his body, not to mention the bonding instinct would have made him feel more reverent toward Ehlena. But after having seen him with Marissa, I can’t help but feel something was missing from Rehvenge when he was with Ehlena.

I don’t know why, but I could just take or leave Ehlena. Maybe it was because I wasn’t confident she could handle being part of Rehv’s world and was just lucky that the symphaths weren’t as big a threat as I expected them to be. I didn’t dislike her, but I didn’t think she was wonderful either. She might grow on me during a reread.

I personally believe that including Wrath to the extent he was in this book was justified for several reasons. He is one of the characters that I’ve become invested in over the course of the series and I like the fact that, just because his book is over, he hasn’t faded into obscurity. I like the possibility of my favourites returning in later books. Also, given the massacre in Lover Enshrined, there was no way that the king could not react and I think we needed to see that he wasn’t sitting on his thumbs while he was being plotted against. Not to mention how confusing it would be to have concurrent events spread over more than one book. There was no way his arc could be covered in a Slice of Life, no matter how many or how few of the books’ readers visit Ward’s site.

Plus, I think there was the parallel with Rehvenge with both of them struggling with the concept of doing the best thing for everyone, despite the personal cost.

All of the Brothers returned (however briefly) in this book, but there was less of the camaraderie than in earlier books. This could be to keep the focus on Rehvenge, but also because shit is getting serious now. Up to Lover Revealed, the books ended on an optimistic note, but from Lover Unbound on, there’s been a lot more doom and gloom, and clearly things are going to get worse before they will get better.

Interesting things happen with Blay and Qhuinn after that really hot kiss they shared in Lover Enshrined. Blay has started smoking, which Qhuinn hates, so it’s clearly a demand for Qhuinn’s attention and a “fuck you” for his ongoing rejection, all in one go. If only there was a gay character introduced to the story who Blay could reasonably meet. Oh, hang on… ;)

Blaylock’s pain is palpable, but what makes him and Qhuinn so compelling is the mutual feelings between them not being acted upon. That kiss is in the air between them every time they’re in the same room.

I was very disappointed with the developments between JM and Xhex, probably because I had expectations of her strength reminding him that he is strong. There are other ways of creating hurdles in their relationship (and one crops up by the book’s end), but I have issues with sex as a destructive force. I’m okay with Xhex and Butch having had sex, because he signed up for an exercise in masochism, but JM was healed and then re-broken and it will take a lot for me to accept the one who did that as JM’s HEA. It’s almost a shame that their book is next, but it won’t be released until sometime next year and maybe by then some miracle will have softened me towards her.

I agree that Lash makes a more interesting villain than the other fore-lessers because he understands his target in ways the others never could. And, what’s more, it’s personal on both sides. He’s such a prick that he really is the best thing that could have happened to the Lessening Society, but he’s such a spoiled child sometimes and I think that could one day end up being his downfall.

I’m going to commit a huge blasphemy by saying there are getting to be too many species at play here. The world was initially about vampires, and their characteristics were unique enough that a significant amount of world building was justifiably required.

But now we’ve got the Moors playing a growing role in the series and we still don’t know much about them (the only reference I’ve heard to Moors anywhere outside the series was in Robin Hood: Prince of Thieves where they were a very human enemy), which means more world building is coming and will inevitably result in the initial players taking more of a backseat.

And let’s not forget the angels. Lassiter is just the first of many, with the new series coming out in October. He got his start on Ward’s message boards under some very mysterious circumstances in 2006 (cue Ward’s characteristic lawyerly dodging and weaving questions), but didn’t appear in a book for another 2 years.

Also in 2006, Ward announced that Payne would be the first female Brother, but refused to say much more than that (she definitely never mentioned the relationship to V). She was introduced in Lover Unbound and a footnote in Lover Enshrined and she only briefly touches on the world in Lover Avenged but in such a way that still no one knows who she is. This tortuously slow teasing out of a storyline was one thing when we were getting 2 books a year, but now that we’re down to 1 (and the new series will divide Ward’s attentions from the Brotherhood), all I can say is, “Aaaarrrgh!”

I’ll second Wandergurl’s verdict that you should only read Lover Avenged if you’ve read the others (or my cheat sheet /end shameless pimp) first.

1. The characters and plot will make more sense if you’ve read the background first.

2. Rehvenge has such a dual nature that I wouldn’t recommend him as someone’s first foray into the BDB universe. I think his character benefits from the context created by earlier books. For me, he’s like Mr. Darcy—I didn’t like him to start off with but my opinion of him improved the more I saw of him.