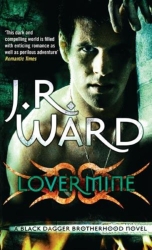 With this latest instalment in the Black Dagger Brotherhood series, J. R. Ward returns to form and delivers a story packed with action and emotion. The crack is back.

This was the make-or-break BDB book for me. After the disappointment—at times downright disaster—of the previous three books, I was prepared to give this series one last chance.

Gone are the random new H-words and awful brand name dropping on every other page. Indeed, there’s nary a ‘messie me’ to be found in Lover Mine.

Yes, the BDB slang still veers towards dagginess, question marks are still missing in action, and Ward makes some utterly ridiculous word choices—in some cases inventing new words that made my eyes twitch—but on the whole the editing is a lot tighter and the prose much improved from even the earliest Black Dagger Brotherhood books.

In Lover Mine, it feels like Ward is stretching her writing a lot more. Structurally, the story is less episodic that the most recent BDB books, despite juggling at least seven plotlines at the same time.

In my review of Lover Avenged I believed that Ward is steering this series towards urban fantasy. I was wrong. The romance is right smack in the centre of Lover Mine.

Characters we know and love

The story opens with an excerpt from Darius’s journal while at war camp in the 1600s. Although this subplot doesn’t converge with the main story until the very end, Ward maintains an emotional intensity in these interludes that made them difficult to gloss over.

In the present time, John Matthew is obsessed with finding Xhex, who disappeared in the previous book and could well be dead. Xhex is actually being held captive by Lash, head of the lessers, trapped by a spell that prevents her from leaving and other people from seeing or hearing her.

Meanwhile, Blay’s desire for his best friend, Qhuinn, is reaching epic proportions and sets up the kind of deliciously angsty scenes I loved about the earlier BDB books. For me, Ward has always been at her best when describing the sexual tension between three people and Qhuinn/Blay/Other Person are some of the most intense she’s written.

In some ways it’s a rehash of Butch and V, and if you’re a Butch/V shipper you might find this a bit of a rip-off. However, Ward’s treatment of Qhuinn and especially Blay are more emotionally honest than anything she’s done since Butch’s book … BUT—and this is a big but—only if you’re prepared to forget all the character building she did for Qhuinn in the previous books.

Look, we all know that consistency has never been one of Ward’s strong points, and although she tries to provide a framework through which Qhuinn’s previous actions—that is, his largely heterosexual sluttiness—can be explained, it doesn’t stand up to any kind of serious scrutiny. So don’t even bother trying—just enjoy what’s in this book because it’s so very good.

For someone who annoyed me no end when he first appeared in the series, John Matthew is not only a worthy hero in this book, but his romance with Xhex is now one of my top three favourites in the BDB.

When JM discovers that Xhex is alive and finds her, it’s the catalyst to breaking down some of the barriers that they had both built against the other. Unlike previous books, this time it’s the heroine who faces a much more confronting emotional journey. There are also some holy crap moments in the story that made me gasp and hold my breath.

For the first time since Lover Revealed, I felt the desire and conflict and angst between the book’s main couple. I skipped all the bonking bits—there’s just a little to much big this, big that, insert this, penetrate that. Still, it’s a lot less complicated than many of the other books—and that’s definitely a positive.

Xhex is by far the strongest heroine we’ve had in the BDB. She’s a warrior in this book, from the first page she appears in, right through to the end. Even though Ward makes the obligatory concessions to the HEA and a certain ideal about love and marriage, I never felt that she lost her grip on Xhex’s character.

JM skates the edge a little, but he never gets as sappy as V or Rehv. THANK YOU, SCRIBE VIRGIN (with two children)!

If you’re interested in JM’s past life, I’m afraid it’s not explained very well—this is one of the more disappointing aspects of the story. The connection between JM and Beth was left unexplored. There’s a chapter in which JM recounts his childhood to Xhex, but, as a reader, knowing that his memories were implanted by the Scribe Virgin made this part of the story feel a little shallow.

I don’t feel I understand what symphaths are any better after this book. The storyline dealing with a mission that Darius and Tohr undertook hundreds of years ago would have been a great way to incorporate this kind of information, but Ward seems so busy following the external plot that she misses the opportunity.

Ward also stretches the happy ending a little too much—I suspect it’s overcompensation for the crappy childhoods that Xhex and JM endured. After all the work Xhex and JM went through to heal and be healed, it didn’t it was feel necessary.

In a lot of the BDB books, the secondary romance is almost as good—if not better—than the first. I think some readers will definitely feel this with Blay’s story.

Blay is suffering from unrequited love. His best friend Qhuinn is such a slut he bonks the tattoo parlour receptionist, as JM is getting a tattoo done, within hearing distance of his friends. He doesn’t even bother keeping it quiet! I mean, how could you not love such a classy guy?

Blay is to die for. I have no idea whether or not Ward gets gay guys and how they act and speak, but Blay could do nothing to upset me in this book. He’s stuck with Qhinn because they’re committed to keeping JM safe, but the stress of seeing the guy he’s in love with screwing everyone but him is turning him into an emotional wreck.

And the thing I love most about Blay? He recognises his destructive path. He makes a real effort to snap himself out of it. I hope self-awareness is catching in the mansion.

Unfortunately, Ward doesn’t manage Qhuinn quite as well. For one thing, you have to throw out pretty much everything you know about Qhuinn from the previous books. Accept it and move on. Enjoy this series moment by moment. It’s the only way to keep your sanity.

You’d be forgiven for thinking, based on the format of previous books, that Blay’s story would be next in the series. I have since discovered (based on rumour—but I trust my sources) that at best we can hope for a novella because the publisher won’t take the risk.

WTF? People overseas are paying $70+ for a virtually signed copy of these books. FFS, take the bloody risk!

On the upside, maybe Blay’s story will take up half or more of Payne’s book. One can only hope.

Bits and pieces to avoid spoilers

For someone whose book is coming next, Payne remains relatively undeveloped and, to me, largely unappealing. She gets a mini-storyline, but it’s all whingeing and moaning that even the occasional arse-kicking can’t make up for. (And anyway, she’s kicking Wrath’s arse, so it’s not like we want her to win too much, especially when Wrath is no longer as irritating as he was in Lover Avenged.) I’m struggling with the idea that she gets a book when Blay doesn’t,

Of all the recurring characters, Layla is the one I have most sympathy for. I wish she’d find some happiness. She’s always being taken advantage of. Plus, she’s trying to give it away and no one wants it! Which is a bit like Marissa, when I think about it.

One of the big issues I had with character behaviour in this book was the excessive drinking to achieve an emotional coma. Ward seems to use it as shorthand for macho behaviour. Not every guy gets on the piss when things don’t go their way, and I was uncomfortable by how casually it was treated.

Oh, and Xhex learns sign language like it’s not another language. One minute she’s learning letters, and a few scenes later she’s translating JM’s gestures. And, I mean, it’s not like he’s teaching her sign language in his bedroom all day, is he?

And the bits I skipped

There’s a storyline about some sleazy tabloid reporter and his bimbo-ish assistant investigating a ghost. I skimmed these parts when it was clear they were going nowhere. It’s the one big misstep in an otherwise highly enjoyable book.

This is J. R. Ward at her best. The angst, the desire, the obstacles—Lover Mine has them all and Ward weaves them together in a most satisfying way. Don’t pay too much attention to inconsistencies or gaps from previous BDB books and you’ll enjoy the book even more. Even though it’ll be a huge challenge to keep me from yawning when Payne’s book comes out, this series is back on my autobuy list.

For a summary of all BDB-related posts on Book Thingo, click here.