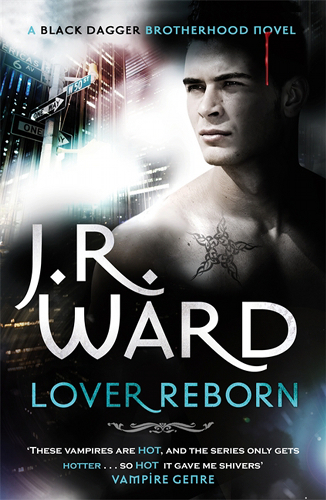 Tohr’s book hearkens back to the earlier books in the BDB series. It’s not without its faults, but in true J. R. Ward fashion, when she pulls out the angst, it’s very, very good.

I thought I had weaned myself off the crack, cold turkey, after I managed to resist the call of Lover Unleashed. But as a former Cellie, I was interested to see how Tohr gets his happy ending. Plus a review copy of Lover Reborn turned up in the mail. How could I resist?

Warning: This will be a long post. I’m using subheadings so you can skip to the bits that matter to you. There are spoilers, although I’ve tried not to give away major plot points.

I wasn’t expecting much from this book, but I was pleasantly surprised. For the most part, J. R. Ward restrains herself from going overly over the top and delivers a story that is more layered and coherent—if not always believable—than the BDB has delivered for some time.

Tohr is still steeped in grief when Lover Reborn begins. Despite the irksome Ward-style writing, the story begins at a cracking pace, with the Brothers chasing stupid lessers—don’t worry, they don’t feature much in this book; more on that soon—and finding themselves face-to-face with the Band of Bastards. I didn’t read the previous book and had no idea who they were, but Ward does a good job of unobtrusively filling in the blanks. Plus I had Decadence’s cheat sheets.

The baddies in this book are a gang of vampires led by Xcor (note: X is the new H), who has his eye on Wrath’s throne and plans to use the glymera to get there. These guys are so much more interesting than lessers—so you can tell they’ll eventually be reformed. Sigh.

Tohr’s romantic arc doesn’t intersect much with the external conflict. Lassiter, it turns out, is on a mission to save Wellsie and Baby Tohr from the In Between—the BDB version of purgatory, which didn’t exist before but does now. Oh, don’t be questioning the world breaking. Therein lies madness.

The book spans over a year of BDB time, which is a pleasant change from previous books. Certainly, Tohr and No’One (aka Joanoni—it’s a Twitter thing) need the time to sort out their issues and the build-up at the start of their relationship is wonderfully angsty, and Ward can write angst like nobody’s business.

But the pacing of the romance isn’t always perfect. When the external plot ramps up, sometimes Tohr’s story gets lost in the action. Lassiter fills us in on what’s been happening, which is convenient but unsatisfying.

Nevertheless, Ward gives Tohr’s healing process a lot of page time. I have issues with how this is handled (see the section on dealing with Wellsie below), but if you buy into Tohr and Joanoni as a couple, then it probably won’t bother you as much. I’m pretty sure many readers will find Tohr’s two-year mourning period insufficient, but I don’t think this is unrealistic. I think people who have been in a happy relationship and lose their partner have a very good template for relationships and are more receptive to new love than we might allow them to be.

The first feeding scene between Tohr and Joanoni—okay, No’one—is done excruciatingly well and brought me to tears. Their conflicts, however, are a mixed bag. Tohr’s declaration that ‘I want to fuck you. That’s why I went back home.’ is just so underwhelming, and on a few occasions he descends to unbelievable levels of arseholic. Their big break up scene could have been more subtle (then again, it’s the BDB), but it’s still a lot more toned down and believable than many of the other books in the series.

For the most part, the relationship between Tohr and No’One is summed up by this quote from her:

I am happy to simply have time with you. That is enough—and more than I could ever have expected out of my fate. These past few months have been a complicated joy that…

Ward being Ward, there’s an extra special twist at the end for No’One that came as a surprise to me. I loved that I didn’t guess it (although perhaps it was just me). That’s how immersed I was with the story—I wasn’t thinking ahead at all. The resolution of the impossible-love-twist may not work for every reader, but at least it makes more sense than Ghost Jane or Monogamous Primale Phury or Scribe Unvirgin or…well, you know where madness lies.

This is also one of the few couples in the series whose happy ending feels secure, at least on an emotional level.

Dealing with the issue of Wellsie

My biggest problem with Tohr’s emotional arc is that Ward uses Wellsie to force Tohr’s romance with No’One. Tohr is essentially forced to get over it by Lassiter in order to save Wellsie and Baby Tohr from being lost between life and death.

It’s as if Ward has to apologise to Wellsie fans for killing her off. What ends up happening is exactly the opposite of what I think Ward intended. To me, this plot does a great disservice to Wellsie—it’s basically her fault that Tohr has to find another love. It also puts a seedy tone around Tohr and No’One’s relationship, especially when they’re finally having sex. It’s like Lassiter is pimping him out so Wellsie and Baby Tohr can get to heaven.

Yes, fine, it’s more complicated than that. It’s Tohr’s inability to let go of Wellsie that keeps her tethered to the living—in the undead vampire sense—world. And, okay, Wellsie’s plight enables Ward to externalise Tohr’s recovery, at least in the beginning—his grief is mirrored by Wellsie’s state and his inability to move on is illustrated clearly to the reader. After that, though, when Wellsie keeps getting worse even with Tohr trying his absolute best to have sex with someone else without feeling guilty—WTF? I hear you scream. Yes, I know.—it just seems cruel.

Because Ward uses Wellsie as an excuse for Tohr having to move on, Tohr’s recovery from grief never really feels natural. Worse, it feels like a betrayal of Wellsie’s character. And I’m not even a Wellsie fan.

If I had to sum up every character’s problem in the BDB series, it would be lack of self-esteem. Go reread your books and tell me you disagree. Everything boils down to characters feeling like they’re not good enough. It’s getting tiring. How long have these vampires been around again?

I was also uncomfortable with the level of contempt that some of the characters directed to anyone other than themselves or their friends. This is particularly noticeable at the beginning of the book. Given Tohr’s disdain for human beings it’s hard to fathom why he bothers fighting lessers. Maybe it’s become a hobby for lack of anything more exciting to do? Vampire ennui saves humankind. Awesome.

Xhex repeatedly goes off on internal rants about the glymera and sexist Brothers and the Kardashians—basically, notions of femininity that don’t fit her:

Anyone tried to turn her into a glymera chickadee? She’d just saw through the gold bars, set a bomb on the base of the stand, and hang the steaming remains from a chandelier in the foyer.

I get what Ward is trying to convey, and perhaps she’s responding to (I think well-deserved) criticism about the portrayal of women in the BDB world. I love that Xhex challenges the Brothers, including JM, about the patronising way they treat her, and she does become more tolerant towards the end of the book. But for the most part, especially when Xhex isn’t even with the Brothers, I think Ward overcompensates—it’s all just too over the top and angry and reinforces the notion that women who have made different choices about their lives can’t peacefully co-exist.

Xcor is one seething mess of self-esteem issues. He’s like V but uglier. Apparently. I don’t know anymore. He’s a great villain, but since he doesn’t seem destined to remain one forever, I’m kind of unimpressed. Nevertheless, the Band of Bastard members are intriguing and these new antagonists bode well for the coming books.

If I had to sum up the theme of Lover Reborn, it would be one of healing.

Ward almost breaks John Matthew’s HEA to provide Tohr’s story with some parallel angst. JM and Xhex discover they just can’t work together, and Xhex leaves the mansion. Again, there’s something forced about their conflict—or at least, the way it’s presented is awkward. A lot of time elapses between scenes and Ward has to fill the reader in with bursts of info dump. There’s some good angst in their story, but JM seems to have a regressed, and their sex scenes are so not sexy. To me they were pointless and porny (not in a good way).

Qhuaylock doesn’t feature much in this book, but Qhuinn does have his own arc. Since the last chapter (excluding the epilogue) ends on Quinn and Blay, it comes as no surprise to me that book 11 of the series will be their book. In the meantime, Lover Reborn is not the book to make Qhaylock fans happy. Me, I’m a Saxton fan, so I’m destined for heartbreak.

Layla’s story arc is the one that caused me the most anger while reading this book. To me, she’s one of the most victimised characters in the series and I desperately wanted her to end up with someone who deserves her. Instead, it looks like Ward will use her to redeem the unredeemable. It sucks like a starving vampire.

There’s also a twist around Layla which I totally saw coming. It might make other readers gnash their teeth, but hey, now it’s your turn. :D

Rhage is totally adorable in this book.

Rhage harrumphed at that. Clearly, even though he was now very happily mated, he felt like the race had one, and only one, sex legend—and it was him.

Look, you can’t escape Ward’s narrative style, and maybe I’m just more sensitive to it now, but the language irks. The brand-dropping seems to have been toned down, but Ward still tries much too hard to be urban and edgy…with unfortunate results. (See the Xhex quote above—I rolled my eyes. Seriously.)

This isn’t helped by godawful editing choices, and at this point, I can’t tell if the blame lies with the editor or with the author. Certainly, I’d hate to have been the proofreader for this book. Tense, punctuation, word choice, lack of nouns—they’ll offend anyone with any love for the English language. I wonder if foreign translations are just as painful?

Deliberately bad punctuation and stupid vocabulary aren’t subversive or cool. They’re just annoying and they make reading more difficult than it has to be.

Lover Reborn hearkens back to the earlier books in the BDB series. It’s not without its faults, but in true Ward fashion, when she pulls out the angst, it’s very, very good. My advice to readers is to do what they’ve been doing all along: love the bits that are angsty and awesome and ignore the bits that aren’t. It’s the only way to keep enjoying this series.

Who might enjoy it: Long-term BDB fans—especially those who skipped the last book

Who might not enjoy it: Readers who love Wellsie or Layla or Qhaylock