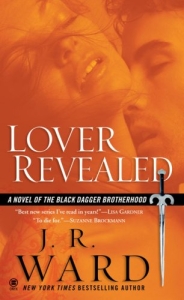 Marissa … uh, I don’t think she has a last name … is a 300-plus-year old, divorced, virgin vampire whose market value in the vampire aristocracy took a severe beating when her former spouse dumped her in favour of a half-breed. The only person who really talks to her anymore, aside from the servants, is her brother, Havers … and he’s pretty dodgy. He’s also a big snob, and when Butch, the hero, comes over one day (in a previous book), Havers turns him away. Marissa doesn’t know this and thinks that Butch just lost interest in her. To cut a long story short, Marissa has major self-esteem issues.

Butch O’Neal is a former cop who is feeling rather useless surrounded as he is by the Black Dagger Brotherhood, a group of super-fighting, scary vampires who pretty much have no use for Butch except as someone to play pool and trade wisecracks with. He’s totally in love with Marissa but doesn’t think he’s good enough for her, which is understandable because as a vampire she could probably kick his arse without even breaking a sweat. To cut a long story short, Butch has major self-esteem issues.

Butch is happily wallowing in his own misery when he stumbles upon the Bad Guys, who are smart enough to capture him, torture him and do some Really Bad Things to him. It just so happens that Havers is the BDB’s preferred health care provider so it’s only a matter of time before Marissa stumbles upon him and gives him a little sexual healing. (There’s stuff in between but this only takes us to page 123 of 463 and I’m bored writing this already.) Havers kicks Marissa out of home for consorting with the lower-than-lower classes (i.e. a human), she takes refuge with the BDB and voila! forced proximity with Butch. Butch, on the other hand, has major issues, mainly the fact that the Bad Guys seem to have infected him with something that’s made him not-quite-human … and not necessarily in a good way. Eventually, Butch discovers that he’s more Special than he thinks and he’s totally excited. Unfortunately, Marissa’s had enough excitement in her life and just wants to lead a quiet, normal life.

Lots and lots, and if you don’t read the first three books in this series, you only have yourself to blame. There are BDB wannabes, a bad guy who just wants to die in a way that guarantees a not-so-violent afterlife, a one-night stand with a hermaphroditic bodyguard, a prophecy, two weddings and a funeral…

My summary style is sooo not suited to this book. I couldn’t possibly cover everything. Just trust me–lots of things happen.

Oh, I should mention lots of V/Butch loving, some voyeurism, glimpses of chains, whips, leather and ballgags (!), and a particularly delicious not-quite-love triangle between Butch, Marissa and Rehvenge.

Lover Revealed suffers from the fact that most of the bits where Butch and Marissa fall in love are actually shown in previous books in the series. We already know they love each other to bits and the external conflicts feel like they’re being thrown at us just to keep the lovers apart until the last few chapters. I don’t get a good enough sense of why these two love each other besides than the fact that no one else seems to want them. Don’t get me wrong, I really like this book and some of the writing goes into goosebump territory, but it’s not without its flaws. If you’re not already invested in this series, Lover Revealed probably isn’t going to do much for you. Lover Revealed is like a Harlequin Superromance meets Buffy (those crazy prophecies) meets Karate Kid (think Cobra Kai dojo: “No mercy, sensei!”). A light sabre? Would have been fantastic!

Lover Revealed is fourth in a continuing series, the previous being Dark Lover, Lover Eternal and Lover Awakened. Click here for an excerpt.