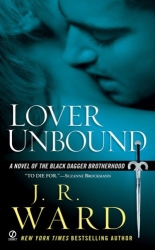 Because it takes me almost a day to write up any sort of response to J. R. Ward’s BDB series, I’ve liveblogged this one. Well, it’s technically not “live” because I’m posting my thoughts in one hit, but I wrote them up as I went along. I’ve tried to avoid spoilers in the liveblog, but after I read the book, I couldn’t resist and I’ve posted my overall reactions afterwards. Those contain spoilers.

Back cover blurb
Blah, blah, blah. I think I know enough. Didn’t even bother. Mm, this book is thick.

Glossary
Will avoid the headache. Skip to ending. I’m curious about the hints being dropped in various blogs. I’m reading the Epilogue, and … meh. Maybe it’ll be better when I actually read the book.

p. 1 (Prologue)
Huh. Well, this is a different approach to the previous books. Can’t anyone have normal parents?

p. 10 (Ch. 1)
Hey, she changed the first line! I think I like the original better. I’m so not agreeing with the first few pages of this chapter, even though she’s written it so well! Which is to say, I don’t like the direction, but I’m enjoying the writing. So all is good.

p. 171
“Bicep” is a back formation. I don’t think a doctor should be using this term even if it’s colloquially acceptable. Dammit, I must stop this nitpicking. It’s ruining my fun!

p. 197 (Ch. 17)
The subplot with John seems like a story of its own. It’s not really intersecting with V’s story. And same with Phury, although there’s a bit of crossover now. While I was never interested in John before, I’m starting to like him, but I still don’t think he should be in this book. His story doesn’t belong, and if the only reason he’s in this one is as a set-up for his own book, it’s going to annoy me.

p. 209 (Ch. 18)
Now I’m beginning to see what everyone is complaining about. What was the point of the V’s angst in the first chapter if it’s all going to be downplayed so quickly? And what does he see in Jane anyway? He’s known her for a few hours at most. And V’s big confession to Butch? I actually laughed out loud.

p. 213
OK, I think guys need to be seriously stoned or drunk to have this kind of conversation. No, really.

p. 243 (Ch. 21)
I’ve never really warmed to Phury, but the way Ward has written him in this book so far has been beautiful. I still don’t get him, but I love the scenes he’s in. She writes bloody good angst.

p. 398 (Ch. 38)
The Primale thing with Phury? It’s awkwardly done. I keep thinking, Would he say that? Would he use those words? It’s too … overly emotional.

p. 455
In some ways, I feel like the last part of this book is a bit of a jumble. Jane’s suggestion to V about where she wants to work and what she wants to do seems so out of the blue when there could have been so many opportunities to have introduced this idea earlier and then tease it out to a more natural progression.

p. 461 (Ch. 48)
You know, I really liked the opening scene of this chapter. In one sense, it’s out of place because the change in this character has been pretty abrupt and the preceding scene was just so overwhelming, but I like that this character’s personality is showing shades of grey.

p. 471
The end of this chapter was really, really good. So dramatic and mysterious!

p. 481 (Ch. 51)
I wish some of Phury’s scenes had been taken out of this book. This one really doesn’t belong here. It’s distracting and breaks the momentum of the main story. I mean, it’s a really great and interesting scene, and it even has some relevance to V’s storyline, but there’s no reason it couldn’t have taken place in the next book.

p. 498 (Ch. 54)
I don’t understand this chapter. Is it necessary? Why would the main story end with this? I mean, an Epilogue is only an add-on, right? So, technically, the main storyline ends here. And … I don’t find it satisfactory or appropriate.

p. 502 (Epilogue)
Why was there an epilogue? Couldn’t the book have ended on a chapter? But the denouement was lovely, actually.

This book is not as bad as I had been led to believe. Yes, it has problems, but they’re not insurmountable for me. I’ve come to realise that I enjoy the BDB mostly for shallow reasons and individual scenes within a book. And this one delivers enough of them to keep me happy. Bear in mind, it takes a lot for me to detach myself from a series or an author once they’re on my must-buy list.

The main problem with the book, for me, is the lack of foreshadowing. Anything–even the deus ex machina that everyone is complaining about–can be forgiven by tight plotting and subtle foreshadowing. And I just don’t feel that I got that from this book (nor the previous one, come to think of it). I have a feeling that this might be a weakness in Ward’s method in which, she says, she just writes down what the characters “tell” her. I imagine it would be very difficult to keep the mythology straight that way, and unless the books in the series were all outlined before she started book 1, she would miss opportunities to lay the groundwork for each story, in preceding books, with a more subtle touch.

And on that thought, lack of subtlety is one of my main gripes. The story includes a few flashbacks, which I thought were unnecessary, as was the Prologue. That information could have been integrated within the present time of the story, and it needn’t have been so wordy. I like Ward’s writing best when she’s writing dialogue and fast-paced emotional scenes. Having said that, I think the narrative in this book is much improved from the previous. It’s tighter, better paced (except the ending), more deliberate.

I like that this book seems to have more coherent themes. For example, there are parallels between V, Z and John (abuse), V and Phury (love triangle/unrequited love, and later, craving for pain), and V and Jane (horrible fathers).

The characters all seem to speak like each other. They’re like … yeah, just …. yeah. You know, I really don’t think any of the Brothers would talk that way. Or. This. Way. Either. It’s not an alpha male kind of thing to say. Or am I wrong? I think Ward should collaborate with Bob Mayer. That would be hot!

The ending is too rushed. Like the previous book, this one suffers from giving too many pages over to secondary characters. For once, I liked all the secondary stories and how they’ve been written, but I still think they belong in their own books. Phury’s story, in particular, could mostly have been moved to his own book without sacrificing the crossover threads with V’s storyline.

I’m not sure why V falls in love with Jane. I can understand that he was in lust, but not in love after a few days, especially when the first chapter is all about Butch. I don’t feel like I know enough about Jane and what makes her special and unique and the best fit for V, other than they had crappy parents. And speaking of Butch, some of the scenes between Butch and V are funny and lovely, but I think Ward goes a bit too far. I think that what was between them should have just remained ambiguous and mostly unsaid.

The conflicts seem rather flimsy to me. V and Jane don’t change all that much in the story. V gets over his demons, but that’s mostly shown internally rather than being demonstrated externally, too. I’m not sure what changes Jane go through (and I was chatting to Wandergurl who thinks Jane regressed). V in Ward’s forum is so much more engaging, and I don’t think the book reflects what we most love about V. I was also expecting more paranormal subplots and revelations of his power. That aspect of V is seriously underplayed. And the yin yang thing with Butch is practically non-existent.

Aside from that, the bedroom scenes are really quite hot. And I think Ward gets the balance right in the beginning where she shows enough of V’s proclivities without making it too unbearable for the majority of readers. I like how she tries to turn it around with Jane, but I agree with Wandergurl that in this case, there aren’t enough of those scenes to show how V’s kink is working out with Jane.

I like the Scribe Virgin. Her character development is a little clunky, and yes, the world building breaks down a bit in this book, but again, I think that’s a weakness in Ward’s method. I love the scenes with the birds (and particularly the last couple of pages of the book). I also love the scene where she stops V from, uh, going through the ritual he’s about to perform. But I still think her character could have unfolded more subtly and that a few favours are given too freely.

Is Manny being groomed for future stories? Because I have to say, we need fewer secondary characters, not more. Particularly not ones called Manny. Maybe it’s my background, but sorry, that’s not a sexy name to me.

Where the hell was Lassiter?!?!

Unlike the previous books, Lover Unbound is not categorised as a paranormal romance on the spine. I mentioned this to Wandergurl, who said that she didn’t feel it was a romance. “But,” I replied, “if you take the romance out, there’s not much left, especially in this book.” (Well, you’re left with John’s subplot which, at the moment, is really a YA story.) For me, this book is more a romance than a paranormal because the paranormal plot is peripheral to most of the story arcs. (It’s interesting, though, that Wandergurl draws the boundaries of what constitutes a strict Romance differently to me.) To be honest, I probably wouldn’t read the series if it weren’t romance. Pretty much the only thing keeping me riveted is the expectation that all these alpha males are going to get smacked in the head with love and desire in the most torturous yet pleasurable ways. I don’t know that the world building is strong enough to sustain a non-romantic arc (though one might argue that it would remove the distractions and improve the world building). Also, I feel that Ward’s writing is strongest when it comes to the angsty, emotional stuff, and I would find it too depressing to read that sort of thing without an eventual HEA.

I think this series is slightly … confused. The books are romances, but the boundaries of the character arcs aren’t well defined and bleed into each other’s stpries. It’s frustrating because in each book are individual scenes and interactions that are just so, so good. It’s kind of like watching a great looking, great sounding contestant on Idol who keeps choosing dodgy songs. The potential for greatness is there, but the execution just falls short of a touchdown.

But hey, I’ve got the next book on order and I didn’t even like Phury before I read this book. So obviously, I still love this series. Though perhaps the rose-coloured glasses have faded to a more reserved shade of pink.