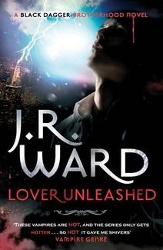 A book for those already invested in the Black Dagger Brotherhood series. Prepare for more darkness than usual and don’t expect all your questions to be answered up front.

It’s not going to surprise anyone to read that I approach a new Black Dagger Brotherhood book differently to any other book. I scribble notes as I go along and I started reading Lover Unleashed with a mental checklist:

Is there anything written on the inside cover in the Old Language?

No, but there are crossed daggers, one black hilt, one white. Symbolism?

Are there any new words in the glossary?

Lhenihan – ‘A mythic beast renowned for its sexual prowess. In modern slang, it refers to a male of preternatural size and sexual stamina.’ Hmm, interesting.

Xcor and his band of bastards: Throe, Zypher and the three cousins, as yet unnamed.

Who could the hero of Envy be?

I won’t answer this here, but when you read the book, it becomes obvious.

Um, probably not with who you would expect it to be, but overall a very good scene and one that was necessary for the development of one or more of the characters involved.

One of the hints J. R. Ward dropped was that something would happen between V and Butch. I would have been more open to the idea before they both bonded with females, so I was concerned about what was going to happen.

But aside from its inherent darkness given V’s state of mind throughout most of the book, I had no problem with that scene and not just because Ward made sure to show that the shellans were OK with it, too. I’ve always enjoyed the connection between V and Butch and their relationship was convincingly able to develop further without detracting from their relationships with their shellans, much to my relief.

Maybe it’s his ‘evil’ motives combined with his leadership style and refusal to join the twenty-first century that bother me, but I’m not sure I like him. His parts were typically not my favourites in the book and I read them mostly out of curiosity. Having said that, he makes a splash and also has opportunities to show honour to balance out his apparent lack thereof. I have to admit, I haven’t always liked Rehvenge or Xhex, but I enjoyed their books. (Don’t take that to mean I’m saying Xcor is getting a book, but obviously nothing can be ruled out yet.)

Throe was one of the bastards to actually be named in Lover Unleashed and we were given some of his back story. I enjoyed reading about how he ended up where he did and to be honest, I’m more interested in reading the bastard scenes for him than Xcor because I find him more likeable.

There was no room for Tohr (who only got a brief mention), Murhder or Xhex and No’One, but I’m confident they will appear in later books.

Back to the review…

Lover Unleashed was not the easiest book to read because it was quite dark and didn’t have as many humorous lines and moments as the earlier books. I will always want to read about V and I’m glad he had such a large role in Lover Unleashed, but at the same time, it was hard to read about him falling apart again. Having fallen in love doesn’t make him less difficult to deal with, nor does it erase the unhealthy emotional defences he formed over the centuries, and this creates conflict between him and Jane, which is compounded when she is forced to put her patient’s needs above her hellren’s. Even though I’d read hints that Ward had given in the lead up to Lover Unleashed’s release, I still felt unprepared for where the story would take me.

If I’ve made Lover Unleashed sound like it was as much Lover Unbound Part 2 as Payne and Manny’s book, well, it kind of was, actually. There was no way Ward could exclude V’s reaction to finding out he has a twin when she could soon be dead or crippled, or avoid reopening his wounds caused by his relationships with his parents, but honestly, I read the book more for V than for the main couple. I’m not sure how Ward could have equipped the Payne and Manny plot to compete with V/Jane/Butch for my attention since Manny was appropriately relegated to the human world outside the Brotherhood’s milieu, and Payne was trapped on the monotonous Other Side, where there were few opportunities for her character to develop.

Manny surpassed my (admittedly low) expectations and was a worthy hero for Payne. I think that readers who perceived Marissa as a weak heroine in Lover Revealed will be more satisfied with Payne’s strength. She is clear about what she wants and doesn’t take her issues out on Manny, but she is more subdued and less aggressive than we’ve seen her in earlier books. Manny is very much focussed on Payne’s needs and tries to enable her to find her own way and be herself without changing her, which is what Payne needs most. He still has the balls to stand up to the Goateed Hater, but doesn’t have the overblown masculinity suggested by the name MANny MANello.

Payne and Manny’s HEA and development seemed incomplete and, without spoiling anything, some parts of the plot relating to Manny will only become clearer over time. Maybe Ward should consider more epilogues like the one she wrote at the end of Lover Awakened, where we saw a much more stable Z with his loving daughter and his shellan still very much alive.

I don’t think it’s a spoiler to say that Payne will be the first female Brother, because Ward let that cat out of the bag in 2006, but I was hoping that her induction would have been a part of Lover Unleashed. It’s also safe to say that Ward’s approach has changed since she wrote the first three books she was contracted for. Her endings were more complete and there were fewer loose ends, with those remaining being part of the series arc. Now, each book is more like a slice of Brotherhood life in general, with a couple getting together by the end. I both like and dislike this. I like that my favourites will make appearances in later books, but sometimes it feels like Ward relies on being able to return to her characters in later books, or maybe there are too many concurrent events for her to jump ahead in time to close off major plots for that book’s main characters. Sometimes it gives the impression of expectations raised without being met. It’s hard to know if we’re going to find answers in a later book or be left hanging. Maybe this would be easier to handle if we were getting a new book every six months instead of every year.

But the plus side of this is that I’ve become more invested in secondary characters before they get their own book, like I did with John Matthew over the course of the series from Lover Eternal onwards.

Qhuinn’s character is forced to develop as Blay is happily cohabiting with Saxton (while now oblivious to Qhuinn) and he has to examine whether he most wants to be with the best friend he loves or the Chosen who can bring him the respectability he’s secretly always wanted. We’ve seen Qhuinn act as a male of worth in earlier books while creating a persona and lifestyle for himself that keeps people, particularly Blay, at a distance, but in Lover Unleashed he’s waking up to the fact that he can be a better male.

Interestingly enough, while all the other plot arcs can be connected to either V or Payne, the Qhuinn/Blay/Saxton triangle stands on its own within the book, but having it share the dichotomy of love and freedom that is explored in other relationships argues for its inclusion in Lover Unleashed.

A book of parallels

Lover Unleashed is a book of parallels (the themes of inequality and not belonging in Payne and Manny’s relationship compared with the same in Butch and Marissa’s, or the twin relationship with one trying to save the other) and reversals (where Qhuinn is on the outside looking in while Blay is doing his own thing, or Butch looking after V, even if it’s not for the first time).

This all serves to demonstrate that Ward’s head is still very much in the game, so it’s hard for me to say whether the bits I didn’t like so much were to do with Ward and her book or me as a reader. I think the fact that I have a mental checklist (let alone one that includes V and Butch, but not Payne and Manny) indicates that I have expectations about what the book will hold. It’s not that I believe that I can or should predict everything that happens (and how much fun would it be to read if I could?) but it’s hard not to expect, maybe not for things to be handled a certain way, but for some things to be explored to a certain extent and in a particular time frame.

Lover Unleashed is not the book for new readers to begin with, and the books are becoming less and less self-contained. By now, they’re written more for the readers who have made enough of an investment in the series to have read this far.

Even though the series and Ward’s current approach are not perfect, I’d still recommend Lover Unleashed, especially to readers who feel as though V didn’t get enough air time in his own book or that Marissa disappointed in the vampire female-human male dynamic.

I experienced the same reading hangover after Lover Unleashed that I do after every new Black Dagger Brotherhood book. But just be prepared for more darkness than usual and don’t expect all your questions to be answered up front.