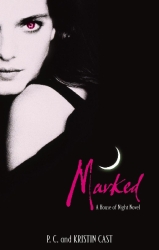 Marked has an interesting premise, but it’s let down by preachy writing, stilted dialogue and heavy-handed foreshadowing. (But it’s still not as bad as Twilight.)

When 16-year old Zoey Redbird is Marked as a vampyre, she leaves her family and friends to live in the House of Night—referred to by human kids as the Vampyre Finishing School—to spend 4 years learning about her new life and undergoing profound physical changes. Although she’s Marked, there’s no guarantee that she’ll survive the Change from human to vampyre.

On the way to the House of Night, Zoey has a vision of the vampire Goddess, Nyx, who tells Zoey that she’ll be the first of Nyx’s true disciples. But first Zoey has to figure out her new high school. The school’s most powerful student, Aphrodite, has it in for her. And what’s more, Zoey kind of likes Erik, who happens to be Aphrodite’s not-by-choice-ex-boyfriend.

It soon becomes apparent that Zoey has powers beyond that of a newly Marked vampyre. As her powers emerge and strengthen, she becomes aware that things are not as they should be at the House of Night … and that maybe she’s the only one who can change things for the better.

P. C. and Kristin Cast have created a matriarchal vampyre society that’s a treat to read for the concept alone, even if at times the male vampyres feel superfluous. I’ll give the authors the benefit of doubt and reserve judgement until after I’ve read subsequent books.

Unfortunately, the promising world building is overshadowed by the characters’ utter lack of charm—not just Zoey, but pretty much everyone in the book. But let’s start with Zoe—she’s too perfect, too preachy, too powerful, too … annoying.

Well, hell! They were filling the room with pot smoke mixed with spices. Unbelievable. I’d stood up to peer pressure and for years said no to even the most polite offers to try one of those gross-looking homemade joints that get passed around at parties and whatnot. (I mean, please. Is that even sanitary? And just exactly why would I want to do a drug that made me want to obsessively eat fattening snack foods?) And now here I stood, immersed in pot smoke.

As it turns out, Zoey faces an even bigger temptation—human blood. Yes, because that’s such a big concern WHEN YOU’RE A VAMPYRE. I predict anger, denial, then bloodlust in her future.

The romance (or Hey, look at me, I’m not Twilight!)

Zoey’s romance with Erik is pure fantasy. He’s sees her once—in rather fraught circumstances—and he’s instantly drawn to her. Edward, much? Okay, he’s the hottest guy in the world. But, Zoey, I want to tell her, he has zero personality! I predict unwanted pregnancy, death or boredom in their immediate future.

However, my opinion could change if Erik turns out to be gay and hooks up with Zoey’s friend Damien. Damien is the sympathetic, well-adjusted friend who defies gay stereotypes by being an obnoxious word fiend. Yes. I know. But he’s still more likeable than the twins-in-spirit-oh-and-look-one-of-us-is-black Erin and Shaunee. Zoey’s roommate, Stevie Ray, is the only character I couldn’t find in my heart to dislike. She’s very sweet. She’s from the country. I predict death in her future. That, or drugs.

The dialogue between Zoey and friends is often painful to read, particularly during lunch when they’re explaining facts about vampyres or school politics to Zoey. It comes out forced, unconvincing and dull, symptomatic of the problems I had with the writing overall.

The sequel and beyond

The preachiness, the stereotypes—including the anti-stereotype stereotypes—and the lack of complexity permeate the narrative and the plot. Marked introduces several plot threads that aren’t essential to the immediate story arc, and there’s nothing I hate more than blatant sequel baiting. The foreshadowing is none too subtle, which makes me interested enough to look up spoilers online, but not enough to actually read the next book.

If your choice is between Marked and, say, Twilight, then go for Marked. The mythology is different enough to be interesting, and, if nothing else, Zoey has some personality. However, the unconvincing dialogue and tedious writing make me thankful that I borrowed this one from the library.

Marked was first published in 2007 by St. Martin’s Griffin, and released in May 2009 by Orbit Paperback. Books in the House of Night series (UK/Australia)

Books in the House of Night series (USA)