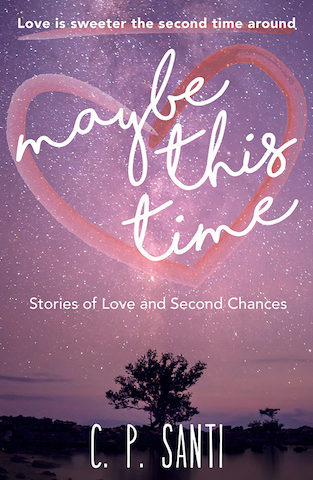 Review of: Maybe This Time: Stories of Love and Second Chances

A bit like a cup of hot chocolate on a wintry afternoon -- warm, delicious and satisfying, as long as you're not expecting a cappuccino. A bit like a cup of hot chocolate on a wintry afternoon — warm, delicious and satisfying, as long as you’re not expecting a cappuccino.

An advance reading copy of this book was provided by the author as part of a promo blitz.

Regular blog readers and those who follow me on Twitter would know that my literary obsession this year is turning out to be Pinoy (Filipino) romance fiction. One of the things I’ve observed about this market is that novellas abound. I’m told that this is, in part, to keep the retail price low, but there are other fascinating nuances around why English language romance in the Philippines seems to favour shorter works.

Maybe This Time, a newly released anthology by C. P. Santi, goes a step further by offering short story romance. With so few pages to prosecute a story’s happy ending, this is always a challenging form for romance authors. Santi rises to the challenge by choosing to write about characters in their mid- to late-thirties, and by being clever about their backstories. But I won’t lie: I needed more kilig.

Sweeter By The Second reunites college sweethearts Rin and Tony, told solely from the heroine’s perspective. Rin is in Jimenez, a small heritage town in northern Mindanao, when she discovers that the town’s Vice-Mayor is none other than her college sweetheart Tony. It’s clear that their attraction hasn’t diminished — ‘he looked like a hot poster boy for good governance’ — and when she learns that Tony is now a widower, there’s suddenly a path to rekindle their relationship.

Exorcising My Ex is also about college sweethearts, but this time they’re brought together by their daughter. Told solely from the hero’s perspective, this story incorporates text messages between Geno and his daughter, who is not-so-subtly playing matchmaker between her parents. Pregnant at 19, Viv turned down Geno’s marriage proposal and eventually they drifted apart. Older and wiser now, they have a chance to rekindle the feelings they once had for each other.

Meant To Be uses alternating viewpoints between childhood friends who have always had feelings for each other, but who never managed to act on it until now. At 17, Arne’s crush on twelve-year old Bea needed time to mature, but due to a series of mistimings and misunderstandings, they’ve just never had the chance to confess their feelings for each other:

On one hand, he cherished their closeness and was glad she though of him as family. On the other hand, he wished he could shake off the platonic trappings of their relationship.

Now, Bea needs a date to a wedding so as not to look pathetic in front of her ex-boyfriend. Arne is only too happy to help.

Santi employs flashbacks in a way that is filled with nostalgia without detracting from the romance in the present day. It’s bittersweet to learn of the immaturity and misunderstandings that led to the characters breaking up in their youth. In  Sweeter By The Second it’s selfishness:

‘Why did you two break up again?’

Because he asked me to give up my dreams and marry him. And I said no.

and in Exorcising My Ex it’s probably the other way around:

…I was grateful to Viv, for giving us a chance to live separate lives. To grow and achieve our dreams. Be the people we were meant to be.

If these three stories could be summed up by one quote in the book, it would be this, from Sweeter By The Second:

“You know what I’d always wished for? That I could freeze that moment when you asked me to marry you and come back to it when I was finally ready.”

But the sense of melancholy that the backstories evoke is offset by the sweetly sexy sparks that fly in the present day. The consummation of their relationship isn’t explicit by contemporary standards, but Santi makes up for it with a lot of dialogue. From Sweeter By The Second:

Tony laughed and helped me undo the buttons. He kissed my jawline while I drew his top from his shoulders. As he shrugged it off completely, I got my first look at his new physique.

“Jesus, Tony! What happened to you?” Holy kamote! He had abs now?

HE HAD ABS NOW!

Santi does a lot within the confines of the short story. In Exorcising My Ex, she redefines what it means to be sexy, as Geno continually observes unusual quirks that make Viv seem sexy to him, including the fact that she’s now more mature. In Meant To Be, the fantasy fulfilment required of romance also doubles as transgressive text by very subtly upending the common Filipino narrative around interracial relationships, what it means to be sexy, and how gender roles are assigned when it comes to seeking true love:

She knew about his addiction to banana cue and Jolly hotdogs, and how he secretly liked sweet spaghetti (even if he’d been revolted at the idea at first)…

Most of all, she was acquainted with his deep, dark secret…that he was terrified of flying cockroaches. (Hee. The big Bathroom Incident in Indonesia. Best. Blackmail. Material. Ever!)

And it wouldn’t be a Filipino romance without families, friends, and even communities, having a vested interest in the outcome of the relationship. I particularly love the way Meant To Be ends:

Auntie Myrna reached up to rub his arm soothingly. “Didn’t I tell you? That novena to St. Joseph works!”

Auntie Myrna’s comment reminds of this quote from The Piper’s Son by Melina Marchetta, where novenas are prayed in service of true love, and I love these cultural tells that are both familiar and surprising.

Reading short story romance is a bit like a cup of hot chocolate on a wintry afternoon. It’s warm, delicious and satisfying, as long as you’re not expecting a cappuccino. Or, in this case, a fully fledged romantic arc. But if you have limited reading time, this anthology packs enough of a punch to satisfy, without that overwhelming sense of just one more page that often means having to catch the next bus, or dinner being slightly burnt.

Each of the three stories has a slightly different structure, which keeps this anthology from feeling repetitive. Santi’s lyrical style is distinctive, however, and it seeps through the narratives. I get the sense that she’s still trying to find the balance between the requirements of writing for the genre — Push that story along, author! — and her natural inclination to linger in a scene and dwell on the quiet moments. These preoccupations aren’t incompatible, of course, but it takes experience to combine them seamlessly. It’s not that I noticed these stylistic transitions overtly, but there’s an unevenness in tone that can be felt under the surface. When she does finds that balance within the story, Santi’s prose is reminiscent of authors like Joanna Bourne, whose narrative introspection elevates angst to another level.

Santi has several grammatical and stylistic idiosyncrasies that I found jarring, and I wish she hadn’t chosen to italicise the Tagalog words in the stories. YMMV, and these are small prices to pay for the pleasure of reading Santi’s prose. Each story ends charmingly with ‘(Not) The End’, reiterating the theme of new beginnings. And if there’s a word that sums up this anthology, it would be: charming.

Content advisory: Due to the story lengths, the conflicts are fairly simple and the sexy times brief.