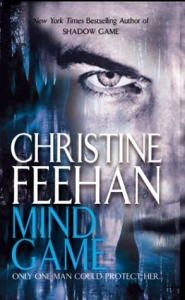 Dahlia Le Blanc’s enhanced telekinetic skills are a blessing and a curse. Subjected as a child to grueling psychic exercises that stripped her mind of their natural defenses, she is unable to properly function around people and their emotions and is forced to live a lonely, isolated existence.

Nicolas Trevane is a GhostWalker, one of an elite group of military trained, psychically enhanced government operatives. A loner by choice, he volunteered to be a GhostWalker to enhance his gift for healing; instead, it’s made him a better hunter. He’s also an anchor–he can draw emotion or energy away from others to help them function better–and a kick-ass sniper.

When Nicolas volunteers to find Dahlia in an effort to bring her into the GhostWalker fold and help her to better cope with her enhanced skills, he stumbles into a bloodbath clearly meant for Dahlia. Forced to flee her home, Dahlia struggles to function in the real world without damaging herself and others, as she and Nicolas dodge enemies and spring a trap to discover exactly who wants her dead and why.

Hitmen, alligators, secret government data, and a truckload of GhostWalkers.

Dahlia, who was at once painfully vulnerable and yet incredibly strong. I love that she thinks for herself and refuses to let her physical weaknesses define her. Whenever Nicolas tries to override her, she reminds him of her own skills–her career, in fact–and insists on being involved. At the same time, she knows her own limitations and takes as much care as possible not to endanger those around her.

Nicolas is very alpha–and yes, sometimes the heroics reaches ridiculous proportions–but he treats Dahlia with care, acknowledges her strengths, and gives her room to exercise her own decisions. Who can resist such a hero?

“This role reversal has to stop. I’m the man and you’re the woman. Women love to hear the L-word. It’s been that way for centuries. Don’t muck up the proper order of things.”

The psychic foreplay is just delish! I’m a big fan of brain sex, so mix it up with a little extrasensory perception and I’m mush. Some of the interactions between Nicolas and Dahlia reminded me of Vaugh and Faith in Visions of Heat–of course, the authors’ styles are vastly different, but my goosebumps felt just the same. *g*

Nicolas couldn’t stop looking at her… He could sit in the boat and admire the flawless perfection of her skin. Imagine the way it would feel beneath his fingertips, his palm.

Dahlia’s head suddenly turned and her eyes were on him. Hot. Wild. Wary. “Stop touching my breasts.” She lifted her chin, fain color stealing under her skin.

He held up his hands in surrender. “I have no idea what you’re talking about.”

“You know exactly what I’m talking about.” Dahlia’s breasts ached, felt swollen and hot, and deep inside her, a ravenous appetite began to stir. Nicolas was sitting across from her … his features expressionless and his eyes cool, but she felt his hands on her body…

Keeping track of the different agencies, operatives and whatnots–not to mention who has what psychic talent–gets bewildering at times, but I’ve never been one for those sorts of details so it could just be me.

There are so many plot twists and turns in this book, yet the resolution seems pretty quick and relatively painless (well, maybe not for the bad guy).

The writing sometimes makes me cringe. Not only are there punctuation and grammar errors, I feel that the prose could have been tighter. I don’t feel like every word, every sentence is purposeful, which makes some sections of the book feel unpolished.

Some of the romancier scenes are … not exactly purple or florid, but I don’t feel they suit the tone of the rest of the book. Sometimes the emotional scenes become a little too wordy, too angsty and, well, too mushy. I’ve seen this happen in a lot of books with alpha heroes or fast-paced writing, and I always feel a bit let down when I crash into a declaration-of-undying-love scene that just doesn’t seem to fit the rest of the book. I’m not saying that it was that bad in this book, but this is a pet peeve and it happens enough times for me to notice here.

What’s with the poem/creed at the beginning of the book? Do secret military operatives really write poetry for themselves? Poetry should be subtle; a creed should be succinct. This was neither. Personally, I think a one-line motto would have been sufficient and, you know, manlier.

Despite the sometimes sloppy writing, the romance in this book just … glows. It’s not without some notable flaws, but the action gets so frenetic that you can probably skim a little without losing too much. Nicolas and Dahlia create fireworks–literally–and their strengths and weaknesses are well matched. Oh, and have I mentioned how much I love Nicolas?

This was the first GhostWalker novel I read, and I enjoyed it so much I bought the first book, Shadow Game. Unfortunately, that book put me off buying the rest of the series–it wasn’t terrible, but I thought my money could have been better spent

Mind Game is second in a continuing series, the first book being Shadow Game. However, Mind Game can be read as a stand alone book. Click here to read the first chapter.