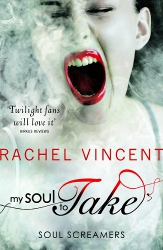 I swore I wouldn’t pick up another open-ended series, but I was completely sucked into the Soul Screamers series. This month’s mixed bag looks at the books so far.

Thanks to a free novella at Books on Board, I’m now addicted to the Soul Screamers books, a teen urban fantasy series—with a bit of romance thrown into the mix—by Rachel Vincent.

Vincent uses Irish mythology as a basis for her alternate world. Sixteen-year old Kaylee Cavanaugh is a bean sidhe (banshee), whose piercing screams call to dying souls. The series begins with Kaylee’s discovery of her heritage and introduces the secondary characters that will form part of her core team, if you will, in tackling the otherworldly challenges she’ll face.

The earlier books are an entertaining if fairly mild introduction to Kaylee and her world, but Vincent ups the ante and the horror with each book. By the third book, My Soul to Keep, the imagery is much more graphic and the personal issues that Kaylee faces are much more complex.

Although there are some thrilling romantic scenes in the books, the series is definitely teen urban fantasy, so there’s no guaranteed happy ending for Kaylee’s romantic relationship. I killed so many fairies reading this series, they’re probably endangered now. Despite this, I’m completely hooked by the story and the characters.

The series is published by Harlequin under the Harlequin Teen imprint. There is also a UK version to be released next year under the MIRA imprint. You can buy the ebooks from the Australian Mill & Boon website, but I haven’t listed them below because, frankly, the pricing is outrageous.

The next book, My Soul to Steal, will be out in Australia this month and in the US in January. I can’t wait to get my hands on it!

Note: Each review may contain spoilers for the previous books, although I’ve tried to avoid anything major. When Kaylee Cavanaugh suffers a severe panic attack at the local shopping centre, she’s sent to a mental health facility to get help. Kaylee is convinced she’s not crazy, but when there’s a slim chance she might finally be let out, she gets a feeling that someone is about to die. And that’s when the screaming begins.

Despite not immediately warming to the prose, the mystery of Kaylee’s condition made this one a page-turner. It feels like an abbreviated version of Girl, Interrupted, but with paranormal elements. I hope Lydia, a fellow patient who helps Kaylee, features again in the series.

Yay or nay? An intriguing start to a great series.

EBOOKS: You can download this free novella from the author’s website.
Books On Board | Diesel | eBooks.com | eHarlequin (publisher) | Fictionwise | Kindle UK | Kindle US

My Soul to Take (Soul Screamers #1)

Kaylee can sense when someone nearby is about to die, and it drives her to a screaming fit. When she loses control in front of Nash Hudson, he seems to take it in stride. It seems there’s a connection between them, and Nash may just be able to help Kaylee overcome her problem—or gift, depending on how you look at it. The fact that Nate is one of the hottest guys in school doesn’t hurt, either. When young girls start dropping dead for no apparent reason, Kaylee gets a crash course in death—because it may well be coming for someone she loves.

Again, I wasn’t a fan of the prose at times, but I can’t deny that this book was hard to put down. In hindsight, I wish I’d read the series in order because Reaper spoiled some of the big surprises in this book. The relationship between Kaylee and Nash is bit teen fantasy-ish, but hey, I’ll take my happy romance any way I can.

Yay or nay? Good start to the series, with well-paced plotting overcoming the odd clunky prose. You can read an excerpt via the author’s website.

My Soul to Save (Soul Screamers #2)

While attending a rock concert, Kaylee witnesses the death of a famous singer who has sold her soul to a demon. It turns out that compromising souls is a thriving business, and Kaylee is determined to save at least one lost soul—grim reaper Tod’s former girlfriend. To succeed, Kaylee must cross the boundary between this world and the Netherworld, where demons thrive, humans are prey and the expiration date doesn’t apply.

As usual, Vincent sets a cracking pace for the story that it’s impossible not to get caught up in Kaylee’s adventures. The prose suffers from some overdone expressions—‘determination echoed in her voice like a vow sworn in a cavern’—but Vincent makes up for these by getting teen reactions and emotions just right in other places:

…I stomped on the gas, and nearly had a heart attack when my poor little car hydroplaned a good ten feet before finding traction again.

Yay or nay? The increasing richness of the world building keeps this series in my must-read list. You can read an excerpt via the author’s website.

My Soul to Keep (Soul Screamers #3)

Just when it seems Kaylee’s life is sorting itself out, she discovers that kids at school have got their hands on demon’s breath—a highly addictive substance that can lead to death, never mind the price you’d have to pay a demon to get it. Tracking down the supplier leads to the Netherworld, and although Kaylee knows how dangerous it is to go back, she may have to risk her soul to save the people she loves most.

This book deals with much more complex emotional conflicts between Kaylee and her boyfriend, Nash. Vincent explores addiction and sexuality through some very clever plot twists. Consequences from people’s actions and revelations in previous books lead to some excellent OMG, of course! moments in the story. Kudos to Vincent for integrating backstory detail seamlessly into the narrative—this aspect of the story was done very well.

Yay or nay? Darker and more graphic than the previous books—my favourite one so far. You can read an excerpt via the author’s website. When Tod Hudson is involved in a car accident, he must make a choice between life, death or something in between.

This was my first foray into the Soul Screamers series, and, well, here we are. Vincent combines tragedy, humour, despair and hope in a story I consumed during my lunch break.

I’m intrigued by some of the details that Vincent lets slip in this novella. How come Kaylee (I’m assuming it was her) saw Tod? Will Nash ever find out about Tod’s sacrifice? How will Tod hang on to his humanity? And I want to know more about Levi, the head of the grim reapers.

Yay or nay? Fans of the series who love Tod won’t have anything to complain about.

EBOOKS: Read the author’s announcement regarding pricing and availability on her blog.
Books On Board | Borders | eHarlequin (publisher) | Kindle UK | Kindle US