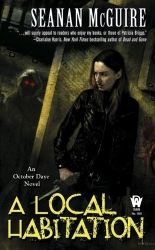 Toby Daye is sent by her liege, the Duke of Shadowed Hills, to the County of Tamed Lightning to check on his niece, the reigning countess. Toby thinks that this will be an easy job, but once she and her assistant Connor arrive, she finds it more complicated than that—people are dying and their souls aren’t being carried away by shades, the traditional soul bearers of the fae.

Toby has grown from the previous book, and it shows—I liked how her character didn’t remain static and bitter. She has become more stable, has found herself on more solid footing. She even has girlfriends and goes on night outs. Her situation (explained in the previous book, Rosemary and Rue) sucks but she’s learnt to deal with it better. She’s still a strong character and you can’t help but barrack for her.

McGuire pays good attention to world building and detail. I liked how the different aspects of the fae came together and the political complications of Tamed Lightning were interesting. However, the murder mystery part of the story was a predictable, and I found myself getting as frustrated as Toby with the lack of cooperation from the characters and their inability to see past their noses. I was also a bit surprised that Toby didn’t figure out who the murderer was, because despite the misdirection it seemed obvious, given the murderer’s personality and characteristics.

I love this series, so I was very excited when McGuire announced that two more books had been picked up by her publisher. I think I will keep reading them even if the series reaches Laurel K. Hamilton proportions with no end in sight. (Please have an end, Ms Maguire!) That said, while this can stand alone, I would recommend starting with Rosemary and Rue. It provides a more detailed background of Toby’s past and sets up the story. It’s also a bit more exciting than this one.

Yay or nay? Not as good as the first book, but still a good adventure. You can read an excerpt via the author’s website.

Or: I tried but I couldn’t.

This book was given to me to review. My apologies but I simply could not finish it, though I tried three times. The problem with this book isn’t the writing or the plot or the characters—I don’t think I got far enough to get the entire plot. It’s just that it was book two of the series and it didn’t stand alone.

The book starts at the end or in between part of the last novel. There was a lot of stuff I didn’t get right away, which I think would be better understood if I had read the other novels. Perhaps Vaughn explains it more later, but as I didn’t get past chapter five, I won’t know. The world building looked promising, but I did not get enough background in the character motivations or in the nuances of culture to see the whys behind their actions.

Yay or nay? If you want to try this one, start with book one. I have read Vaughan’s other series, Warprize and quite liked it (though I must admit to not reading book two) so if I were to recommend anything it would be that.

A review copy of this book was generously provided by Hachette Australia. In the US edition the author is named as Elizabeth Vaughan and the series is called the Star Series.

In Arabian Nights by Tahir Shah

In this standalone sequel to The Caliph’s House, Shah talks about his continued life in Morocco and how he goes about ‘finding the story in his heart’. As a culture with a strong sense of oral tradition, it is said that in Morocco, everyone has their own story—one that is meant for them and will have special significance once it is told to you. Shah goes about finding his story by seeking out storytellers, also in an effort to preserve the dying art of storytelling. Along the way, he talks about his life in his big, crumbling renovated house, his memories as a child with Afghani/Nomadic history, with strong ties to Morocco, his relationship with his family, past and present, and the many colourful characters he meets along the way.

I loved this book. I bought it on impulse after The Caliph’s House saved me from a day of boredom in my old job, where I sneakily downloaded it on the work laptop and pretended to be reading PDF documents. (Yes, it was on my TBR for a loooong time. Why, I don’t know. Maybe I didn’t want it to end.) You don’t have to read the first book to understand this one. One of the things I liked most about In Arabian Nights were the stories within stories. There are many layers to this book—the stories that he hears from others, the stories he remembers from childhood, and the present. The parable-like tales delivered by storytellers are never interpreted, and you are left to understand how they relate to you—and at least one of them will. When Shah finally found his story, I felt uplifted, as if I had found my own story, the story in my own heart.

Yay or nay? It was a beautiful tale. Highly recommended.

The Big Oyster: History on the Half Shell by Mark Kurlansky

Despite the title, this is actually a history of New York. Kurlansky is popular for writing gastronomic histories, using food to illustrate the history of the world or places as he did with his books Salt: A World History and Cod: A Biography of the Fish That Changed the World. I actually bought The Big Oyster while in New York, inspired to read the history of such a fascinating place.

The book starts out strongly, with the appearance of the Dutch on American shores and the first sighting of oysters. It takes us all the way to the present era in the last chapter, discussing movements and events that shaped New York. It was an interesting way to cover its history.

While I enjoyed this book, I also got a little depressed right from the start because I know that New York has been around a while and it’s quite polluted—for example, no matter what anyone says I would never swim in their river, or eat anything caught from there—and I knew the oysters were doomed. Its not a secret; you can tell this from the prologue. It was depressing and the little environmentalist in me was aghast at seeing how it started and how unmanaged sewage and filth and lack of hygeine basically just lead to the destruction of the area and pretty much the extinction of the New York Oyster. (I shall get off my green soapbox now.) I also felt that while, yes, this is a gastronomic history, it had too many recipes and cookbook excerpts.

Yay or nay? If environmental issues don’t upset you too much, I would recommend this as a history of New York, told in simple terms, with oysters. I would, however, recommend Kurlansky’s other books more, particularly Salt: A World History and The Basque History of the World, which introduced me to his writing.

This book is published in the UK and Australia by Vintage Books (Random House) as The Big Oyster: A Molluscular History of New York.