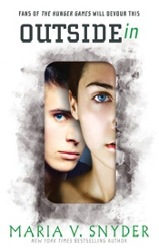 This week’s mailbag is a bonanza, thanks to Mills and Boon Australia, who sent us a box of assorted titles (though I detect a distinct YA bias). Some of these are series books, so I’m torn on reading them or catching on the series first. I’m particularly keen on the Rachel Vincent, after reading her Soul Screamers series. (If you’re a fan of this series, would you recommend starting the series properly, or can I just jump straight in?)

All of these titles will be out in Australia in July.

For Maria V. Snyder fans, don’t forget that she’ll be in Australia in August. From what I’ve gathered, the tour will focus on meeting her younger readers, but there may also be a few opportunities to see her with a more adult crowd. (This is not say I don’t like mingling with younger readers. But as an oldie, I don’t really want to barge into an author event that’s focused on school kids!) I’ll post more if and when I know the details.

Outside In by Maria V. Snyder

Okay, so I did prove that there’s more to Inside than we knew. A whole world exists beyond this cube we live in. And fi nding that led to a major rebellion between worker scrubs like me and the snobby Uppers who rule our world. Make that ruled. Because of me, we’re free. I thought that meant I could go off on my own again—while still touching base with Riley, of course. He’s the one Upper I think I can trust.

But then we learn that there is an Outside. And something from Outside wants In.

All I Ever Wanted by Kristan Higgins

For Callie Grey, turning thirty means coming to grips with the fact that her boss—and five-week fling—is way overdue with his marriage proposal. And way off track—because Mark has surprisingly announced his engagement to the company’s new ‘Miss Perfect’. If that isn’t bad enough, her mum decides to throw her a three-oh birthday bash in the family’s funeral home.

Bad goes to worse when Callie stirs up a crazy relationship with the town’s not-so-warm and fuzzy veterinarian, Ian McFarland. So Ian is more comfortable with animals—he’s also formal, orderly and just a bit tense… The ever-friendly, fun-loving and spontaneous Callie decides it’s time for Ian to get a personality makeover. But darn, if he doesn’t shock the heck out of her, she might actually fall for the town’s unlikeliest eligible bachelor…

The unscrupulous new Council Chair has charged Jace, Marc and me with trespassing, kidnapping, murder and treason. Yeah, we’ve been busy. But now it’s time to take justice into our own hands. We must avenge my brother’s death and carve out the rot at the heart of the Council.

It’s not going to be easy, and loss seems unavoidable, but I have promised to protect my Pride—no matter what. Then there’s Marc. And Jace. I need to choose between them.

With a target on my back, I’m heading for a final showdown that can—and will—change everything forever. No decision will be easy, and not everyone will survive this epic fight to the death…

Miss Talitha Grey had once been penniless and without any marriage prospects. Now she’d inherited a fortune, and thanks to Lady Parry, she was to be launched into society.

Tallie vowed to make Lady Parry proud by being the model débutante—but Tallie was harbouring a shameful secret that could ruin both herself and the Parry household.

Marrying a highwayman awaiting execution is Katherine Cunningham’s only hope for that way, her debts will die with him. But it turns out that her husband, Nicholas Lydgate, is innocent—and the son of a duke!

Katherine is determined to save his life, as she is attracted to Nicholas, but she won’t hold him to a union until he shows he cares for her…

Life hasn’t been easy on sixteen-year-old Emma Conner, so a new start in New York may be just the change she needs. But her new posh Upper East Side prep school? Not so much. Friendly faces are few and far between, except for one that she’s irresistibly drawn to—Brendan Salinger, the guy with the rock-star good looks, who is also the richest kid in school.

Even when Brendan inexplicably turns cold, Emma can’t stop staring. Ever since she laid eyes on him, strange things have been happening. Streetlamps shatter whenever she walks by, and Emma’s been having the oddest dreams. Visions of herself in past lives—visions that warn her to stay away from Brendan. Or else…

Scandalous by Candace Camp
When an injured man appears on her doorstep Pricilla Hamilton is moved to help the stranger. Why was someone trying to kill him? And what happened to his memory?

Pricilla has always been a model of propriety, the dutiful daughter and loving sister who puts her family above all else. No one could guess at the shocking secret that she keeps hidden—or the desire that burns inside her at the stranger’s touch. Their love could be nothing less than scandalous.

Abandoned by his cavalier father at a young age, William de Veres grew up knowing little happiness. William has learned to put the past behind him, and as a military hero, he rises fast in the ranks of the hedonistic Restoration court. Until he is forced to seek shelter from a charming young Puritan woman.

The civil wars have cost the once-high-spirited Elizabeth Walters her best friend and father, leaving her unprotected and alone. When her kindness and beauty bring her to the attention of William—and the king—she will have a choice to make. After all, can a notorious libertine really be capable of love?

Seduced by Starlight by Charlotte Featherstone

Jase Markham, London’s most dashing—and notorious—rake, has loved his brother’s fiancée, Blossom, for as long as he can remember.

When his brother casts Blossom aside, Jase is determined to finally make her his—if she is willing to overlook his scandalous reputation!