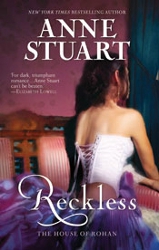 Adrian Alistair Rohan lost his faith, and now, a dedicated member of the depraved Heavenly Host, he loses himself in his only pleasure — the seduction and debauchery of beautiful women. Rich, charming and devastatingly skilled in the art of love, he never fails in his conquests…until Charlotte Spenser.

Charlotte is facing a desolate, passionless future, none of which matters to Adrian, who imagines her a toy until better prey arrives. But beneath her drab exterior, Charlotte is a woman as enchanting as she is brilliant and, lured into Adrian’s world, soon she becomes the seducer — and he the seduced…

Night of the Vampires by Heather Graham

As a soldier, Cole Granger fights to restore peace to a world divided by war and evil. His extraordinary talents are enlisted to prevent the President’s horrific premonition from becoming reality. Nothing — and no one — will stop him from fulfilling his duty. Especially not the mysterious young woman who claims to be his comrade’s sister. Enemy or ally, he can’t yet determine. But one thing he knows for certain is that he must keep her close. Very close.

Megan Fox’s quest to uncover a family secret leads her to the centre of vampire riots in West Virginia. To find the answers she needs — and clear herself of suspicion — she must join forces with Cole. They work undercover to bring justice, but they can’t disguise the potent attraction that draws them together. Yet trust doesn’t come easily for Cole…and when Megan unearths the grim, dark truth, can she trust him to believe her?

It’s always been just Kate and her mum — but now her mother is dying. And when her dying wish is to move back to her childhood home, Kate agrees. So she starts at a new school with no friends, no other family and the fear that her mother won’t live much longer.

Then she meets Henry. Dark, tortured and mesmerising. He claims to be Hades, the God of the Underworld. If Kate accepts his bargain, he’ll keep her mother alive while she attempts to pass his tests.

Kate is certain Henry is crazy — until she sees him bring a girl back from the dead. Now saving her mother seems possible. If she succeeds, she’ll become Henry’s future bride — and a goddess.

But if she doesn’t…

Deep within the forests of the Pacific Northwest, two vampire coalitions battle for supremacy — Guardian enforcers who safeguard humanity, and Darkbloods, rogues who kill like their ancient ancestors.

Alfonso Serrano is a hunted man. For months he’s managed to elude the Darkbloods, vengeful foes who won’t rest until he’s dead. But he still craves one dangerous temptation — Lily DeGraff, the sexy Guardian agent he’ll risk anything to protect.

Lily is a wanted woman. Her talent for tracking Sweet — a rare blood type that’s addictive to vampires — makes her a prime target. Her only hope is the stealthy vampire operative who stole into her bed…then left her in despair. Danger aside, Lily won’t let Alfonso near her heart again — until an irresistible hunger threatens to draw them back together…and into an assassin’s snare.