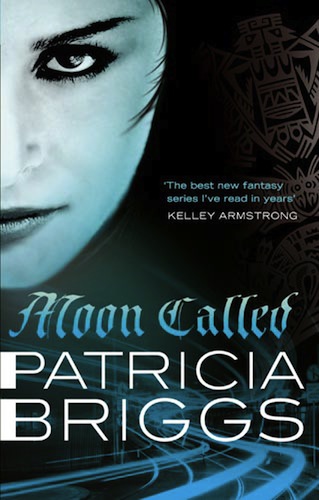 This series is fine-grade book crack, and I'm inhaling these books as fast as I possibly can. This series is fine-grade book crack, and I’m inhaling these books as fast as I possibly can.

I don’t know why it took me so long to pick up a Patricia Briggs novel, but I just spent seven straight days reading her Alpha and Omega series and then her Mercy Thompson series. When I was done, I started rereading the books in chronological order.

I blame Sarah Wendell and all the enablers on Twitter.

Mercy Thompson is a walker—a coyote shifter and the only one of her kind that she knows of. She has abandonment issues—her mother sent her to be fostered with the werewolves, her foster dad committed suicide, and she was sent away at sixteen when the pack’s Alpha caught her necking with his son—which has led her to value two things: her independence and her ability to keep a low profile and not get into any more trouble.

So when hiring a desperate werewolf to work at her garage—‘I have a degree in history, which is one of the reasons I’m an auto mechanic.’—leads to Mercy accidentally killing another moonstruck werewolf, she contacts the local pack’s Alpha for help. Adam Hauptman is the Alpha of the Columbia Basin pack and Mercy’s next door neighbour. They have an…interesting relationship in which Mercy, in response to Adam’s attempts to assert any authority over her, ‘spoke respectfully to his face—usually—and pulled the dilapidated old Rabbit [she] kept for parts out into [her] back field where it was clearly visible from Adam’s bedroom window.’

This isn’t a romance, by the way, but there is a burgeoning romantic arc for Mercy. More on that soon.

The plot escalates quickly when Mercy finds a dead werewolf outside her trailer and Adam is badly injured when intruders break into his house and kidnap his daughter, Jesse. Mercy decides to ask Bran, the Marrok—the most dominant Alpha in the US—for help, and he sends his son, Samuel, to help. Samuel is a doctor and he’s also the guy who broke Mercy’s heart, causing her to be sent away from the pack when she was sixteen:

He’d been funny and charming. Lightheartedness is not a gift often given to werewolves, but Samuel had it in abundance. Under his wing, I learned joy—a very seductive emotion.

So now, Mercy is at the thick of a seemingly politically motivated kidnapping. She has to ask favours from the fae and the vampires to find the rogue werewolves, and even then, there’s no guarantee that they’ll find Jesse alive, or that they’ll survive the encounter. So much for staying out of trouble…and avoiding bossy, territorial alpha men.

I can’t remember the last time I enjoyed an urban fantasy book so much. Everything that usually bothers me in this genre—the heroine first person POV, the snark, the pacing, the super everythingness of the paranormal creatures—Briggs manages to co-ordinate in a way that is an absolute pleasure to read. I’d have preferred the narration to be in the present tense, but that’s a very small quibble.

What I love most about the story is not, as you might expect, the romantic subplot, but the characters themselves. It’s not just Mercy, Adam and Samuel—many of the supporting characters are just as charming or intriguing. The three main paranormal types—werewolves, vampires and fae—have different talents, idiosyncrasies and cultural norms. Their interactions are fascinating and filled with nuances, which are shown not just through Mercy’s narration, but also through dialogue and, my favourite, the characters’ assumptions.

Adam’s eyes narrowed. ‘I don’t think so. She is mine.’

It would have been flattering, I thought, except that at least one of them was talking about dinner and I wasn’t certain about the other.

I also love the details that Briggs decides to include, hint at and, yes, leave out. Mercy’s narration often provides some back story and world building necessary to understand what’s going on, but Briggs is careful to show that not everything is as Mercy perceives. It helps that I like Mercy. Briggs creates a heroine who is strong and independent, but who is also vulnerable, smart and knows when to seek help. She’s prickly about being told what to do, but she picks her battles. Plus, she has a sense of humour: ‘(I liked to tease Adam about his fainting couch—How many women do you expect to faint in your living room, Adam?)’

It’s crucial, I think that Briggs lets the story breathe. Although Moon Called is a page-turner, it isn’t non-stop action from start to finish. Briggs leaves room for the reader to absorb what’s going on and who the characters are before throwing the next plot twist.

I didn’t manage to figure out who was behind the attacks until the story reveals it, and that’s unusual. Unfortunately, the motive behind the kidnapping is the weakest part of the story because it requires what seems like overly complex explanations. What I do love is that although werewolves are generally aggressive creatures, the heroes and heroines in this story don’t take violence or death lightly. I particularly love the way Briggs phrases this explanation of how the Marrok’s pack converts people to werewolves:

The last full moon of October, all of those who chose to try to become werewolves were allowed to come forward. In a formal ceremony they were savaged by Bran, or by some other wolf who loved them, in the hopes that they would rise Changed.

Okay, now for the love triangle. I hate love triangles, but the one between Mercy, Adam and Samuel is…well, it’s still heartbreaking but it’s okay because it’s very clear from the start who Mercy should end up with, and she’s not stupid. Briggs may have almost been too subtle in setting up Mercy’s conflicting emotions, because I don’t feel that Mercy makes a strong enough case—at least in this book—for why she keeps her heart open for Samuel. (When I reread it after having read the entire series so far, it made much more sense.)

Just to be clear, Mercy refuses to have sex with either of them until she makes a definite choice. There’s a bit of kissing, though. I mean, the two guys are pretty hot. There’s nothing explicit about these encounters, and in fact the most romantic scenes happen before Mercy acknowledges what she feels: ‘I left my head on my knees. If Adam was here, everything else could wait until I caught my breath.’

The love…dilemma, let’s call it, provides some lovely displays of flashing wolf eyes and alpha male behaviour without being over-the-top or abusive. Adam and Samuel are alphas with a tight leash on their control, and it’s fascinating to see how differently they understand Mercy.

This series is fine-grade book crack, and I’m inhaling these books as fast as I possibly can. And just to make this book even more awesome, there’s a scene where Mercy vomits. It’s a vomit book. Perfect.

Who might not enjoy it: Romance readers looking for sexy times with werewolves