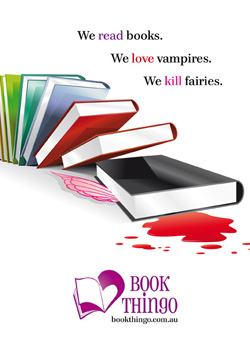 If you’re an ARRA member, you may have seen our brand spanking new ad. Huge thanks to designer Jennifer Wu. You like? It’s a bit blurry in the ARRA newsletter and the text is a little small, but hopefully we’ll get that sorted for the next issue.

I love that squashed fairy. Love.

The administrators of REDgroup Retail announced yesterday that 42 Angus & Roberston shops would close by mid-July or earlier if stock is sold before the deadline. Click here for the press release and the list of shops to close.

Or so Neil Sherry, Minister for Small Business, predicts: ‘I think in five years, other than a few specialist booksellers in capital cities we will not see a bookstore, they will cease to exist.’ Twitter went ballistic over this article, with many a bookseller angered by the minister’s lack of, well, tact.

Personally, I think it’s probably not an unreasonable prediction. I would, however, have expected him to be a bit gentler with his words, especially given the constraints that Australian booksellers have to operate in: parallel import restrictions (often with local editions costing up to double their overseas counterparts), shipping costs, GST and lack of distribution channels for ebooks. That said, if I were a bookseller, I’d be using Sherry’s gloomy prediction to lobby hard to ease some of these restrictions.

Fox News published this article on how ‘salacious chick lit’ is driving the ebook market: The Real Force Behind Ebook Sales: Heaving Bosoms. It makes some pretty broad assumptions.

I’d love to know what you guys think—positive or condescending? It’s a fine line for romance readers sometimes. Also, do you think bricks and mortar bookshops will still be here in five years? Which bookshops would you hate to see closing down?